The Truth Behind Drone Warfare. 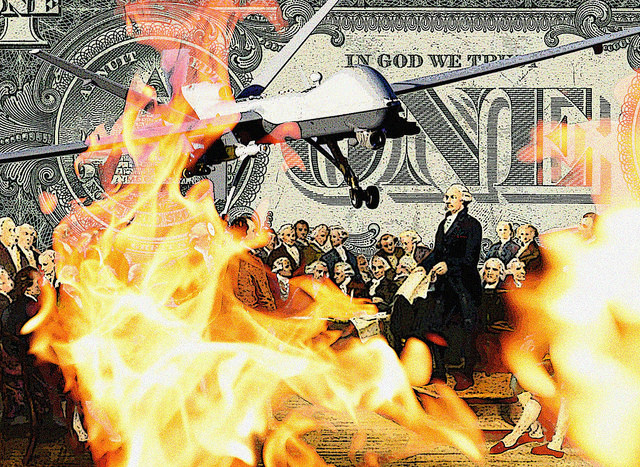 Elephant is a diverse community. We are reader-created.  We welcome all points of view, especially when offered with more sources and less invective, more frankness and less PR. Dislike an Op-Ed or opinion? Share your own take here. ~ editor

Modern drone warfare is an exceptional form of power—perhaps the fiercest yet to govern this earth.

They are operated from within the safety of American borders by a handful of political puppets seductively sutured to the metallic coattails of the military industrial complex.

Only in America would the grim reaper come dressed in suit and tie: lawyers, soldiers, private defense contractors, congress members and the President—these are the people in the business administration of life and death.

In order to fully understand modern drone warfare, we must look at the origins.

The first drones were created in the 1950s during the space race. Hastings describes drones as “technology deployed first as a means of surveillance, then as a means to kill the enemy. [1]”

Shortly after the ’50s, the first modern usage of wartime drones was in Vietnam. Hastings explains that the low cost and lethal convenience of drones led to their complete weaponization during the War on Terror (which began with George W. Bush’s administration) and ensures their continued usage today.

“Signature strikes” are now the preferred type of drone strike; targeting groups of people and patterns of life instead of identified terrorists.

Because of this, the necessity for evidence and due process (an international law) is no longer respected. And as a result, proposed enemies of the United States (including some U.S. citizens) have be killed without judicial processes.

Drone warfare simultaneously operates in the shadows of the laws of war and in the bright blue skies of the victims.

They are controlled by something known as the “disposition matrix”, a concept that ensures permanency in American warfare [2]. The disposition matrix is controlled by the National Counterterrorism Center (NCTC), and to explain it in layman’s terms, the NCTC is constantly collecting information and surveillance; with the eventual intention of creating and implementing a “matrix” that determines the punishment, which oftentimes includes execution (Greenwald 2012).

And as if the President didn’t already have enough power—the “kill lists” of the CIA and Pentagon must now be verified by the executive branch’s disposition matrix. How’s that for checks and balances?

The solidification of the disposition matrix in U.S. politics creates “acceptable” and government approved legislature for the truly inhumane killings of militants, and most times, other innocent community members.

For every “high value” target, there is a civilian or innocent person who has paid the price as well.

Over the course of three years, Obama has unleashed 268 drone strikes—five times the amount unleashed during George W. Bush’s time in office.

Of these drone strikes, 3,000 “militants” were killed, four United States’ citizens and 800 civilians. What’s more, at least 174 of people executed by drones were under the age of 18 [1].

But President Obama is not the only one dealing death to US enemies: 116 secret C.I.A. strikes in Pakistan killed at least 45 civilians, 19 of whom were children.

To get a better picture of Obama’s influence, let’s take a look at these numbers:

Between 2004 and 2007, prior to Obama’s presidency, there were only nine recorded drone strikes. However, between the years 2008 and 2012, Obama’s presidency was responsible for over 300 signature strikes [3].

That being said, Obama has done a lot of great things during his term. Unfortunately, his drone policy just doesn’t make the list.

The usage of drones is growing exponentially, and with that growth comes the deaths of thousands of people, many of whom never once participated in war crimes against the United States and if they did, were refused an equitable and mandatory judicial processing.

Human rights are violated, judicial and international law is ignored and the spiritual core of thousands of people is questioned.

In a different article, Greenwald [2] relays more detail on the permanent impacts of these killings. Drone attacks have led to entrenched psychological distress within residents of the Federally Administered Tribal Areas (FATA). Residents of the FATA live under constant threat, never knowing if they will be killed in a drone strike potentially targeting another “militant”.

According to a story by Aljazeera America, Children now prefer to play during rainy and cloudy days because they know drone strikes occur most often during sunny, blue-sky days.

Citizens of the FATA no longer gather in groups and participate in cultural events—such as funerals and village meetings—in fear of being labeled terrorists and eventually killed.

Coupled with these facts is the undermining of international law, essentially killing without evidence or due process. The U.S. is known for striking the same area more than once, coining the term “double tap killings” [2]. Community members and humanitarian workers are afraid to assist original victims because another missile could incinerate them just as quickly.

Causing harm and/or injury to civilians ranks high in the hierarchy of war crimes.

Targeted killings are becoming “post-political”. In other words, their voices are not being heard. “Militants,” civilians, children, and humanitarian workers, those absent of exonerating evidence, are needlessly being murdered; their voices simultaneously squelched by the explosion of bombs and political rhetoric.

The new panoptic and airborne empire that targets life rather than terrorist is brutally unequal.

Drone pilots sit safely within U.S. protection as they register “bug splats” (a term actually used by pilots) thousands of miles away. Drone pilots are incredibly removed from their actions resulting in a devaluation of human life. The asymmetrical warfare produces an unrealistic picture of the true atrocities of war and spares only the drone pilot from the violent barbarisms he or she is inflicting.

Will the killing ever stop?

Will the signature of the drone ever fade?

The legacy of the drone is no doubt a deleterious one.

Whoever assumes the next Presidency will be faced with a difficult choice: either employ more defense contracts (and ultimately deaths) or cleaning up the juridical debacle we call human and international law.

The phrase “drone creep” is beginning to circulate, warning of the possible summation of 30,000 drones in U.S. airspace by the year 2020 [3]. What does this mean for the skies of the FATA and the rest of the world?

With this in mind, it is only appropriate to believe that the drone phenomenon will not be making an exit from U.S. global surveillance and warfare anytime in the future.

Perhaps the shadow of the Predator Empire will only metastasize as more drones fill our skies, extinguishing whatever democratic light the United States of America once illuminated.

Perhaps the only way to repair the damage that has already been inflicted is through increased monitoring of drone usage. Hunches based on patterns of life should not be satisfied in the protection of the U.S.

Instead, complete profiles of terrorists, saturated with high-quality evidence, should become a necessity to ensure the correct human is being targeted and potentially killed. In addition, the increased precision in the control and administration of drone missiles requires reexamination in order to protect the innocent lives of civilians, children and aid workers.

The powerful and well-designed humanitarian and international judicial laws should be respected and utilized during inevitable wartime scenarios.

Reputations, ideologies, moral standards and most importantly lives can be saved if we choose to do so. America needs a more mindful and humanitarian-based approach towards its enemies. It needs to be based in facts, morals and law: effectively ensuring no more innocent lives are ended in vain. 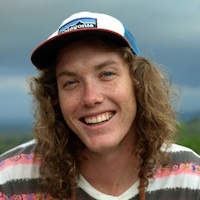