Why I Still Teach Yoga in the Age of Chakra Tees. 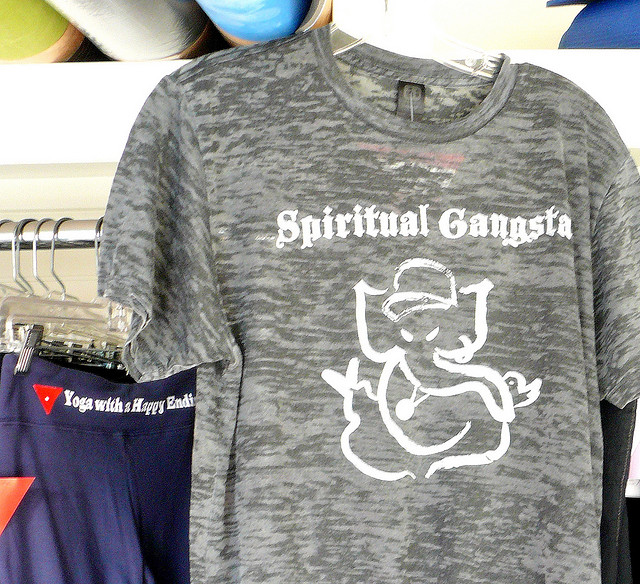 I have regular come-to-Jesus (come-to Ganesh?) moments about why I continue to teach yoga.

Admittedly I am not part of the first generation yoga venturers. The teachers who went to India in the late 60s, early 70s—-Ram Dass, Lama Tsultrim Allione, Richard Freeman-–when flights to India left once or twice a week and an aerogram was the only choice for communication.

My teacher, Trish O’Reilly had already been to India and I benefited from her experimentation. She’d been to the three main masters of the Krishnamacharya lineage and landed on Desikachar, where she found the most depth for her personal inquiry.

That didn’t stop me from doing my own investigation later.

By the early 1990s, while yoga had crawled out of its hippie, freaky associations with Hare Krishnas and pretzel poses, yoga was still alternative.

That first year I dragged both my parents, my 14-year-old sister and my 11-year-old brother to class.

Practicing yoga, to me at the time, felt like something counter-cultural—a way to change the world through changing myself.

Through my body, I felt like I was living my ideals of equality, freedom and justice—a radical departure from my Ivy League education. Chanting, breathing practices and sutra study were a part of every class experience.

My first yoga classes were integrated experiences, so much so that I did not know asana, pranayama, japa mantra as separate. By the time I thought of teaching six years later, my parents were leary of such an alternative career choice.

A couple days ago, I was Rolfing a new client, who knew I was a yoga teacher. He was sharing with me his experiences of awakening, studying and living the principles of Eckhart Tolle.

While we were talking, he said, “wow, you really know a lot about the mind and awareness.”

My indignant knee-jerk reaction was, “I am a yoga teacher.”

His immediate response, “That doesn’t mean anything. That’s an identity, a status piece.”

And here we are.

In 2015, in Encinitas, where I live, there are at least 20 yoga studios in this one small town.

200 hour yoga teacher trainings are on everyone’s bucket lists. Turn your head and spit and there’s a yoga teacher.

“It’s great,” you say. “Yoga is for everyone and now everyone is doing it.” I will not bore you with my rant on tradition versus innovation, of accessibility versus dilution and of quantity versus quality.

I will say that it mattered that Krishnamacharya went to Tibet to study with his teacher. It was significant that the early dharma teachers made pilgrimages to India to study.

Inconvenience is a boon on the spiritual path.

In my town, there are yoga classes from 6am to 9am, every hour of each day. There are excellent classes with seasoned teachers every day of the week. Some of the studios are donation-based. All external obstacles, save some traffic or a child’s sickness, are absent from going to yoga practice.

Really just internal resistance has to be faced and for a fervent student with a burning desire, that is no serious challenge.

These days my parents worry if I can “make it” in a glutted market. Yoga went from counter-cultural to mainstream in 15 years!

At most studios, the pay is the same as it was when I started. There are so many yoga teachers out there, that studios don’t need to pay any more. Most yoga teachers are creative iconoclasts that have difficulty running businesses. There is more opportunity than ever in yoga, precisely because the “weird” has been taken out of it and almost everyone thinks yoga is good for us.

My personal inquiry is in what teaching yoga means for me now.

Ironically, it is an identity question.

When I lived in Boulder, teaching yoga “meant something.” I think it actually meant too much.

People assumed that, at 28, because I knew something about yoga practice—that I had some unique window into something that they didn’t.

Of course, that was a bit intoxicating. I felt special.

I became weary of feeling special. A trip to India, replete with a guru beat down took me from special to inconsequent rapidly. And although apparently devastating, perhaps that was ultimately a savior to a disnecessarily inflated ego or an ultimately flimsy sense of knowing.

Middle ground would have been nice.

Then I moved to Brazil, where people respect Pilates and personal training more than yoga. Most Brazilians regarded yoga as a fringe, fairly lame, form of exercise where you will probably get hurt. (Brazilians tend to be more loose-ligamented than Americans)

Back here in the US, my hometown happens to be a yoga mecca.

It is really important to me that I be doing something whereI feel I am being of service. It is hard to feel that I am doing much service, when there are hundreds of other people that can do the very same thing. I do realize that my voice and message will be heard differently because I am unique, but that doesn’t satisfy me.

I always wanted one of the stories, like some of my peers have, about how yoga saved their life. They were angry and mean with short tempers, found yoga and now are better human beings. They were drug addicts who got clean through yoga. They were miserably depressed and found a road out with yoga.

I have no idea who I would be without it. I started at 19, a formative time in my life, when I was discovering who I was, what the rules of the world are, how I wanted to live and who I wanted to be.

Yoga for me was a radical departure from the classical education I had received, from my overachieving drive. Very early, my teacher showed me it was not something I could be immediately “good at.” She gave me no praise and yet I continued in a class full of 60 year-old women, getting constantly corrected. There was something there, but I could not name it, understand it or talk about it.

A new yoga teacher recently asked me, “why do you still teach yoga?” Here is my answer:

Yoga is a home I return to, a language that I speak that makes sense to me.

Yoga is one way to get together with other people and connect and breathe together.

I love connecting with people beyond persona, in the unprotected state, having the chance to make intimate, meaningful contact.

The body holds our answers. Many people don’t know that. So I love being the tour guide in to new territory. New bodies discovered in the same body. The very inquiry into what is this body? Why do I have one? What do I want to use it for? Is it a machine? A computer? A vessel? A corset? An animal? What is the truest expression of self in the material form? The body is territory for infinite discovery.

I love seeing who people really are, which cannot be disguised well in movement.

As our world gets faster and faster, with more and more stimulus, silence and pausing are counter-cultural. Yoga can be a chance to stop and feel.

I find stillness and connection in myself when I teach.

It’s what I know how to do. 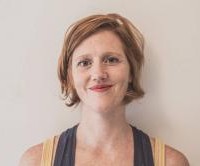