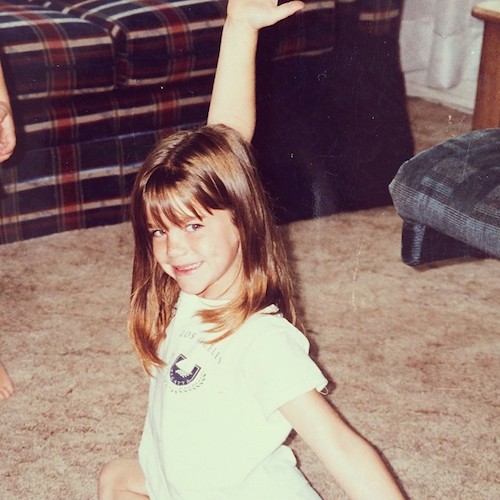 Everyone has a story and every story differs from another.

I have always felt like my story did not matter, or should not be told because there are so many people that have had it worse.

In my mind, telling my story would be belittling those who have had horrific circumstances that don’t even compare to my own.

However, like I said, everyone has a story and each story is unique and has different outcomes and effects. I decided to share my experience after becoming inspired by #TheStitch campaign going on right now. Not only is it therapeutic, but I believe that sharing my story will help someone out there who is going through, or went through, the same thing.

Let me make one thing clear before I continue; I am not and never will be a survivor. I’m not a victim. My name is Jane and I am just like you.

I was born into a Mormon household with two loving parents in a cookie-cutter home. When I close my eyes I can still see the blue trim of our old farm house, smell the onions in the fields nearby, and taste the freshly picked corn on the cob.

When I try to imagine the life I could’ve had, I become overwhelmed with grief. I became a sex object at six years old. I was fondled, forced to do things, and worst of all made to believe that I was “icky.”

I was conditioned for sex, and truly believed that was all that I was good for. My parents had caught it at one point, did a little screaming while I hid upstairs between my twin bed and the wall…hugging my tear-soaked stuffed animal.

Around 11 or 12 years old the sexual abuse stopped, but the cycle of emotional and verbal abuse had just begun. I became numb to everything and everyone.

Due to my inability to say no, I jumped head first into more than one abusive relationship with two much older men. I knew that both of them were bad news before ever agreeing to see them a second time, but when asked I just couldn’t say no.

I did not begin recalling my childhood sexual abuse until about a year after I moved out of my parent’s house. When I started remembering, it hit me hard and fast. I couldn’t sleep at night. I couldn’t go outside without fearing for my life. Floods of memories started pouring throughout my brain and I didn’t know how to handle it.

The day I told my parents about what happened to me growing up was in 2012; I was 22 years old. My dad and I were arguing about something over a delayed phone conversation and it just slipped out. I was living in rural Alaska at the time with my ex-husband and our baby boy.

Sometimes I wish I wouldn’t have said anything, because the response I got wasn’t what I was looking for or needed. I did not want to be told that “This is between you and him” or “Well, I’m sorry to hear that.” I wanted my dad to cry out to me and apologize profusely for not doing his job…for not protecting me. But he didn’t.

Does that make him a bad person? No. I’ve come to terms with the fact that for generations my dad’s family has just swept bad things under the rug and hoped they’d go away. It isn’t his fault, but knowing that still didn’t give me the validation I deserved. My mother’s reaction was emotional and I felt her pain. I can relate to her as a mother and couldn’t imagine how I would feel or react if my child told me such a thing. Telling them began this entire process…recreating my conditioned identity.

I began counseling about 11 months ago. If anything from this writing sticks out to you it should be this next sentence. It does not matter how long ago the trauma occurred, seeking help and busting your butt in the healing process is vital for long-term happiness. I needed to quit trading long-term happiness for short-term comfort. I thought that I was okay. I was so far from okay that I honestly don’t know where I’d be had I not walked into my therapist’s office that day in May last year.

I wore a purple dress with killer heels to my first counseling session. I made sure that I looked like a functioning adult who wasn’t depressed or anxious. He saw right through that. In that first appointment, I experienced genuine validation for my struggles for the first time in my entire life. One of the things he said during our first few months that stuck out to me was, “Even if you don’t make sense to you…everything about you and everything that you’ve gone through makes complete sense to me.” What a freakin’ relief. Thus began this long journey. I thank God every day that I met the right therapist, and that I had the courage to walk into his office.

I am sharing my story publicly for the first time in my life, not for my own gain but in hopes that others will speak up too. I have spent almost every single one of the years I’ve been alive in fear. To the naked eye my family was perfect. We lived in a cute farm house, went to church every Sunday, got great grades in school, and lived our lives making sure others couldn’t see us struggle.

I think that for generations that is what people deemed acceptable. I say, fuck that. I refuse to sweep things under the rug, and I will make sure that my kids know that it’s okay to talk about difficult things. The physiological effects of trauma are very real and to those out there who have casually thrown around the word “slut”…think twice. We are all human beings who deserve compassion and love. Our world would be a much better place if we normalized trauma, mental health and flaws. Not one of us is perfect and that should be a beautiful thing.

I don’t consider myself a survivor or a victim. I’m just Jane and I’ve been through stuff like everybody else. I’m thankful for my struggles, because without them I wouldn’t be the person that I am today. Because of my experiences with trauma, I will be a damn good social worker in the very near future. I am still working hard in therapy, struggling through the wonderful world of EMDR (Eye Movement Desensitization & Reprocessing) and creating a beautiful and new identity. Speak up everybody. Speak. Up. You deserve it.

PTSD is a Natural, Human Response to Disordered Events: An Interview with Chris Eder.