Why I Cry During Yoga Class. The first time I did yoga was in my coworker’s basement.

She was fifteen years older than me and had previously been a yoga teacher. We worked together at the public library, and she had taken me—24, baffled at the world, struggling with bipolar disorder—under her wing. She showed me pigeon pose and I wanted to cry out from the discomfort. She taught me how to breathe in a way that would increase my energy. She made me feel safe and warm and powerful.

I was recently out of an abusive relationship. Not the kind of abusive relationship where he hit me, but the most subtle, insidious kind: lies, manipulations, betrayals. He claimed to be polyamorous but was not open at all about his other partners. But I was infatuated and could not let go.

It was possible my father had committed suicide. There was no way to know; he had died of heart failure exacerbated by the toxicity from a weight loss drug called phentermine that he prescribed at his medical weight loss office. His own drug had killed him. I would never know if he had intentionally taken extra pills to kill himself or if it was an accident.

My bipolar disorder was not being properly managed—I had crazy mood swings and had taken to calling in sick to work so I could sleep all day. I had thoughts of walking out into the woods, lying down on the ground and staying there until I died.

The first time I went to a yoga class somewhere other than my coworker’s basement, I cried. My father was three months dead. My boyfriend and I had broken up a week earlier. I did Warrior 1, Warrior 2, another sun salutation and then, back in the uncomfortable pigeon pose, I laid my head on the ground and let it out. I cried quietly but intensely, the tears streaming down.

I started going to yoga twice a week, when my bipolar symptoms didn’t keep me at home. I was a zombie some days and, as soon as work was out, all I wanted to do was go home and lay in bed. I kept crying in yoga class. The breathing and the movements were good for me. I’d feel free after each class, until my circumstance and my symptoms came crashing back over me.

I started dating someone twice my age. He was abusive too—yelled at me and called me a dumbass. Other times he was nice. He gave me lots of weed and sugar and alcohol. He didn’t want to be seen around town with someone so out of his age range, so we never went out together. Sometimes he would go out alone and I would stay at his house by myself. I would smoke his weed and do some yoga on his mat. But when I was stoned I could never focus my attention, and I would end up laying there staring at the ceiling, wondering what the hell I was doing.

I broke up with the man twice my age and on a whim texted an old crush from college. I ended up driving up to the mountains two hours away to spend a week with him. At night we would watch movies and read together. I had been so infatuated with him when we were school together. It was magical to finally be with him. During the day he went to his electrician’s job, and I would either read all day or go to yoga class. It felt so good, to be there with him, to be doing yoga while he was at work.

When I went up to visit for a second time, we had sex the first night, but from then on, when we went to bed he ignored me. I cried. I was doing something wrong.

“You haven’t done anything wrong,” he said. “It’s just, you’ve been here a long time, and it feels like living with someone again. I’m sorry.”

I told him about my dad’s potential suicide. I told him how I couldn’t have orgasms because of my bipolar meds. He said he was sorry it was like that for me.

The next day, I went home, but I left him a letter asking if he wanted to be in a relationship with me. He said no.

Two weeks later, I took a plane to Europe.

With me was one hiking backpack. Strapped to it was my yoga mat. I was going to Europe for three months. Six weeks would be spent at an artist’s retreat in the south of France. I sold most of my belongings before heading out. All 600 of my books were in my mother’s basement, waiting for me to return.

In France, I did sun salutations every day. My bipolar symptoms prevented me from working on my novel efficiently. Sometimes I spent all day in bed. I would try to get up to eat and at least do a few poses on the mat. I was struggling. I emailed my former lover who was twice my age saying I was going to kill myself. I thought about killing myself. I was a wreck.

After Europe, I moved to Montreal. There I stayed in the apartment of the mother of a famous rockstar, who happened to be my friend’s aunt, who happened to be nice enough to let me stay in her place while spent the summer in Ottawa. I was there for graduate school in library studies. My first week, I tried going to hot yoga, but by that point my bipolar meds had started making me sweat profusely under the least stimulus, and hot yoga proved very uncomfortable, so I left early, claiming to be sick.

I met a boy I liked who didn’t want a relationship. I missed my lover who was twice my age. My bipolar symptoms left me stranded in bed some days. I found an apartment. I found new friends. I found a job. I started school. Eventually I found a boyfriend. I loved him but something was missing. I broke up with him. My bipolar symptoms flared. I spent days in bed, wanting to die. My new Canadian doctor adjusted my meds. I felt better, but the dips still came.

I found a new yoga studio. I try to go twice a week, when my symptoms aren’t overwhelming me. I’m online dating for the first time. My medications could be working better. I feel I’m too crazy to live. I miss my father. I get on the mat. I miss my ex-boyfriends. I am in pigeon pose. I want to fix my life. The tears flow. 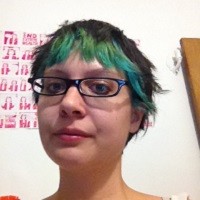