Superman helps Me be more Intentional Every Day. 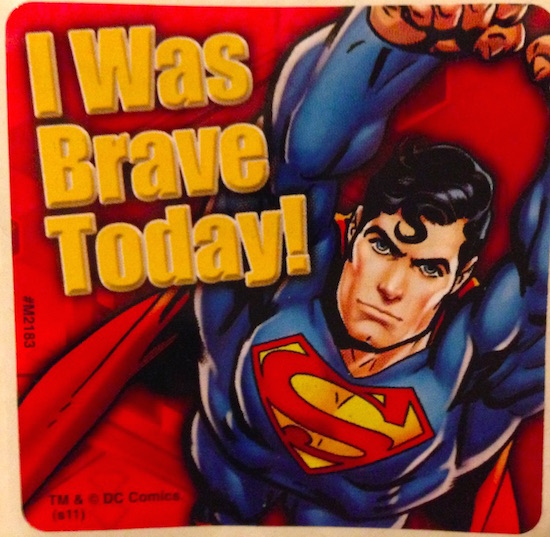 There’s a Superman sticker on the wall above my desk at home.

The cartoon hero is rocketing into the sky, and the sticker reads: “I Was Brave Today!”

I look up at it when I’m working, writing, plotting and planning. When I start to feel scattered, it brings me back to myself.

I am brave. I do brave things. Tonight, I will be able to look back and say, “I Was Brave Today!”

About a year ago, I was lost. I’d intentionally turned my life upside down—left a bad marriage, left a bad job, sold a bad house, lost 30 pounds, moved to a new apartment, started a new business and launched a local, live talk show.

I’d sloughed off a life’s worth of negative and manifested a brand new positive, but I was reeling.

Learning to be positive, after decades of negativity, was more difficult and complicated than I’d imagined. I was overwhelmed and couldn’t focus. I was scattered and panicked when I realized that it was going to take work to make everything work.

Over the years, I had declined, along with my partner, who—lost in his own self-destruction—only knew how to tear me down.

Every day diminished me almost imperceptibly—I didn’t even realize how much of me had been whittled away, or how much of his negativity I had internalized and taken on as my own.

Trying to make a new start, I fell into crisis. I tried to project confidence, but every day, inside my head, I became more and more anxious. I’d changed my environment, but I still needed to get a handle on my own head.

Therapy helped me talk things through, but I needed to find additional solutions that involved action. I needed to do more than talk. I needed to reprogram my settings.

I turned to a friend and mentor, who is also a life coach. Ever since I’d first heard of “life coaching,” I’d scorned it. Do we also need a walking coach? A breathing and blinking coach? Until I tried it, I arrogantly avoided the nagging feeling that maybe we do need these coaches. Maybe this thing called living is so complicated that having someone on your team to celebrate success and improve performance isn’t such a bad thing.

We discussed vision and goals and intent. He cautioned me against negative self-talk and my very first assignment was to go home and write five positive “I” statements on Post-it Notes, to stick to the bathroom mirror.

He asked me if I really wanted to do this.
Yes, I said, I was just embarrassed. What if someone saw them?
He reminded me I lived alone.
I whispered: I know. But what if I see them?

That night, I made three notes:
I am capable of great things.
I am funny.
I am going to get better at accepting the positive.

Almost instantly, these little pieces of paper had a transformative effect.

Seeing them as I stepped into the shower, ruminating on them as I brushed my teeth, processing them as I washed my hands—they started to work. I went through my days feeling a little more capable, a little funnier and a little more willing to be okay with all of it.

I started adding Post-it Notes every day. The mirror became more and more crowded. I began posting notes on the wall, on the door, in the hall.

One sunny afternoon I came home and saw the light from the windows catch the multicolored notes papering the walls.

There were so many notes I couldn’t even read most of the statements. The Post-it Notes had gone from something meaningful to simply a symbol, filling a hole but not meeting a need.

One by one I took them down and sank to the floor in the hall.

It’s not about the pieces of paper, I realized. It’s about the message.

I remembered a sticker that a friend had given me some months ago, as a joke.

Superman rocketing into the sky, saying “I Was Brave Today!”

I rifled through papers and drawers and found the sticker, taping it to the wall above my computer.

That’s the message, I realized.

“I Was Brave Today!”

I do brave things every day.
Some days it’s challenging the establishment and trying to change the world.
Some days, it’s simply getting out of bed and agreeing to join the world.

These, and everything in between, are acts of bravery.
And the braver I am, the stronger I get.

It took years for me to learn to think negatively. It will take some time to fill in those spaces with the positive.

In the meantime, I know that Superman has my back.

I Married Superman: 10 Characteristics of a Quality Guy.