How a Broken Ankle Changed my Life. 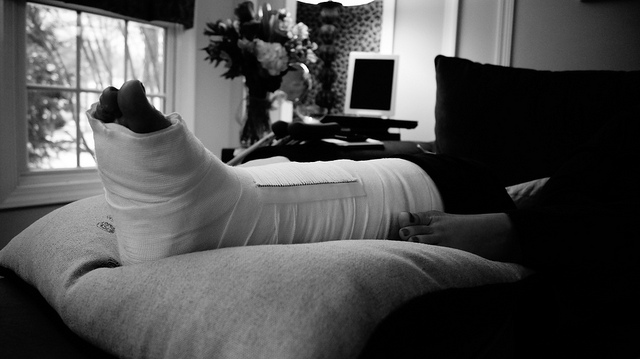 The moment I broke my ankle I pretty much shattered any possibility of continuing to live the active, outdoorsy life I loved of yoga, trail running, climbing and biking.

At least according to what my doctor prescribed.

I went from practicing yoga seven days a week, climbing five days a week and biking all over the place to sitting in my bed, contemplating my existence and counting the days until I could walk again.

It was all I could do.

That and drink beer.

I tried yoga and failed; tried to go climbing and got told off by my therapist; running was out of the question; and mountains were just an image I saw from my bedroom window.

I turned into a bitch.

I didn’t want to talk to anyone or do anything. Sometimes, I wanted to do everything and drove everyone around me insane.

The person I was slowly turning into was one that I didn’t recognize.

My spirit was struggling and my mind was going around in circles. I went from never owning a pair of heels to googling new fashion shoes and trendy outfits.

My face became a canvas for the exploration of makeup and I have never worried so much about what to wear.

I had too much time to think about my recent break-up and too little time to sweat it out and move on with my life.

I found myself holding my breath, going crazy over things that didn’t matter and giving meaning to moments that had already passed.

Sitting in bed alone with my thoughts, contemplating my existence, was not how I had envisioned starting off my year.

I was losing my mind.

So here I was, at the young age of 32, having an existential crisis.

It seemed as if the world was falling apart.

Fear, anxiety and uncertainty were ruling my life and little by little, I was drowning, inside and out.

Blinded by what I couldn’t do as a result of my broken ankle, I fell.

I fell really hard, figuratively and literally and it took me a while to get back up. I made it all the way to the bottom of an emotional abyss where I managed to lock myself in for a while, sitting and staring at a bunch of broken pieces from my life.

Every day I woke up crying. Stillness was something I was never good at and hanging out with the million thoughts that went through my mind every second was unbearable.

So what did I do?

I started to listen.

I made a conscious choice to snap out of the negative cycle I had put myself in and listen. Some thoughts I liked, most I hated, but I realized that this was the moment I had been preparing for.

Just like when a runner wants to run a marathon, they need to train, I too, had been doing the same through yoga—training for my life journey.

I began to apply all the life skills I had learned over the years, picked up my broken pieces and used them as stepping stones out of my existential abyss.

Little by little, I went from not sleeping at nights to appreciating what it meant to be still.

And trust me, coming from a person who could not sit still for more than two minutes and has the attention span of a two-year-old at 32, it was complicated.

I struggled. But I did it. And here is how:

1. I woke up every day and before I could even think of everything that I was missing out on I became grateful.

I got up, stretched said a list of everything that I was grateful for in my life and smiled.

My brain was so used to hearing me complain about everything, that by being happy when I was supposed to be sad, I tricked it and it worked.

Every day I began to feel happier and happier and began to appreciate the small moments that I found myself in.

Those became my mantras!

I said them over and over, day in and day out. Everything I wanted for my life I manifested. The universe has enough magic for all of our dreams to come true and I had forgotten that.

So, I transformed the way I thought and manifested what I wanted instead of complaining that I didn’t have it.

How it worked is that I manifested what I wanted in life (for example I wanted a new job), then I imagined how I would feel if I already had that new job and then I put it out to the universe.

Little by little, I started to receive some of that universal magic.

3. I thought about my true passions and what I wanted to do with my life.

I realized that the job I was working at was not making me happy, adding to my anxiety.

I realized that it is never too late to follow your heart and live a fulfilling life.

I made a list of what I was good at, what I loved to do, what I knew how to do and based on that, I figured out that what I truly wanted was to travel, write and adventure in the wild.

4. I realized that my broken leg was perhaps the best thing that could have ever happened to me in my life.

I gained clarity on who my true friends were. Therefore, my relationships strengthened with those who were there for me and I let go of the ones who were not.

Better yet, I became aware that I did not need anyone but myself to live the life I wanted.

If I wanted to go out on a bike ride, I didn’t have to wait for all my friends to come. Although company is always good and exciting, I learned how to be happy with just myself.

Anytime I felt lonely I became a tourist in my own city.

I had traveled to so many places around the world on my own, in utter happiness, yet I could not do anything on my own when I got back home.

So, I changed that.

Whatever I wanted to do, I pretended I was in a new country and I met new amazing people and have had incredible experiences.

Most importantly, I realized that walking to the rhythm of my own heart meant at times moving at speeds I was not comfortable with, but it opened up spaces for me to be alone with my own thoughts.

As boring as it may sound, they had something to say.

I learned that the way we breathe and look at the world should be shaped by the manner in which we see our life, not how we envision it.

Because desiring a life I didn’t yet have meant living a tomorrow that still wasn’t there.

I became aware that loving the present moment allows us to become the people we want to be (which can sometimes be a struggle).

I hid behind my fears, belittled the steps I took and regretted those I didn’t take.

Breaking away from the enslavement of my own mind and looking back at the experience I had just overcome helped me realize that what I may have considered at one point a waste of my time, was the greatest dance of my  life.

The Messy & Beautiful Process of Transformation.