Family Kicked Off Flight because of Special Needs Child. 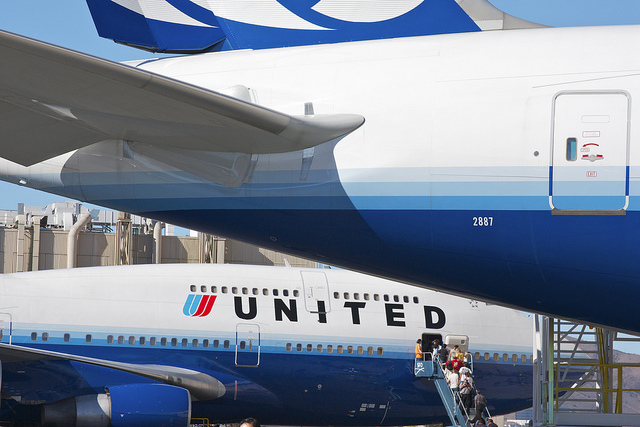 I read a news story this morning that is both sad and infuriating.

Oregon resident, Donna Beegle, claims that her family was kicked off a United Airlines flight because of her 15-year-old daughter, who is living with autism.

According to the ABC News story:

The family ate dinner in Houston, [Donna] Beegle said, but [her daughter] Juliette refused to eat. Beegle brought some snacks on board for her because, “If her blood sugar lets go, she gets frustrated and antsy. We try to anticipate that and prevent that.”

After boarding, Beegle said she asked the flight attendant if she had any hot meals.

“Juliette refuses room-temp food,” Beegle said. “I had no real way to bring hot snacks in my bag.”

The attendant told her they had a hot sandwich, but the sandwich arrived cold, Beegle said, and Juliette refused to eat it.

This is really nothing particularly out of the ordinary for anyone who has had any experience dealing with people on the autism spectrum.

Autism—or Autism Spectrum Disorder—is defined as a serious developmental disorder that impairs the ability to communicate and interact.

This is often frustrating for the child unable to adequately communicate their needs, as well as for the caregiver who is struggling to determine what that child requires.

Often, children on the spectrum also suffer from Sensory Processing Disorder (SPD), a condition in which the brain has trouble receiving and responding to information that comes in through the senses.

For instance, loud noises may be extremely aggravating to someone living with SPD. Or a tag on a shirt, which may simply be a mild annoyance for most folks, becomes a huge source or irritation that cannot be ignored.

As I read the aforementioned article, Juliette’s sensitivity to cold or room-temperature food and her preference for hot foods made me think that she might be struggling with SPD, in correlation with her communication challenges, and any other autism-related challenges.

The thing is, although these types of preferences can be inconvenient, particularly when acting out becomes the result of such preferences not being met, clearly this mother knew exactly what her child needed to remain happy and calm.

Like any other parent, she did the best she could to prepare her child to be comfortable on their flight home to Oregon, but her daughter, just like any other kid, didn’t necessarily behave the way Mom wanted.

Juliette wasn’t ready to eat when  the rest of her family ate during their lay-over, despite her Mom’s best efforts. Mom did the best she could, trying to have some snacks on-hand, but of course the temperature of the food became an issue.

Now, flight attendants are employed by airlines primarily to ensure the safety and comfort of passengers aboard commercial flights, which is why I find it so appalling that the attendant on this United flight could not be bothered to help out a family in need.

Despite the fact that Donna Beegle tried to explain that her daughter had special needs, the flight attendant was unwilling to be helpful.

When Donna tried to purchase a hot sandwich for her daughter, it was brought out cold. When she inquired if there was any hot food available from the first class menu, the flight attendant refused her.

Now while I understand that there are certain rules and protocols in place (such as coach passages are not typically allowed the conveniences of the first-class ticket wielding passengers) it is also my experience that flight attendants can reasonably use their discretion somewhat, when attempting to ensure comfortable and safe travels for their passengers.

I find it so sad and unfortunate that this family did not have someone tending to them, who was willing to show some compassion and human empathy.

If one has a mom explaining that her kid has special needs, and all she needs to keep the peace all around is a hot snack, one would think this wouldn’t be such a difficult request to accommodate.

And in fact, this request could be accommodated, because once the Mom said she wanted to prevent her daughter from having a meltdown, suddenly she was served hot rice jambalaya.

The sad thing is the flight attendant, for whatever reason, could not leave things be once the child had eaten her meal. Despite the fact that after Juliette ate her food, she was happy and calmly watching a video, the flight took an emergency landing due to what was announced as a passenger with a behavior issue.

What issue? Nothing had happened!

True, the mother explained what could happen, the worst case scenario if her child continued to be deprived of a hot meal, but a simple snack prevented anything like this from happening.

So, because this family required a bit of special assistance, the entire plane had to be diverted to an emergency landing!?

Both paramedics and police officers boarded the diverted plane, with the task of removing Juliette and her family from it.

They could clearly see that there was no issue—simply a teenager watching a video—and the officers were ready to leave, but then the captain stepped out to speak with the officers.

The family was told: The captain has asked us to ask you to step off the plane.

Per the ABC News article:

Another traveler, Jodi Smith, who was sitting three rows behind Juliette, said she heard the entire conversation with the first-class flight attendant.

“He was being totally ridiculous,” Smith said. “You could hear them saying their daughter was perceived as a threat… I stood up and said absolutely positively not…. she was calm, she had done nothing… I’ve been on flights where kids have screamed for 4 hours and they’ve never diverted a flight.”

“This was the epitome of discrimination,” Smith said. “I have never in all my years of flying seen anything like this.”

Ridiculous indeed! This flight attendant and captain opted to publicly shame this family! Why? Because they required some extra attention? Because the child might have a temper-tantrum?

There are so many other actions that could have been taken in this situation—for starters, just being kind!

Special needs or not, a little kindness and compassion would have gone a long way in this situation.

Donna Beegle has filed a complaint with the Federal Aviation Administration, and she also intends to file a lawsuit against United Airlines. What she hopes to achieve is that airlines will start providing training for their employees on how to better accommodate people living with autism.

With the number of children being diagnosed with autism or other spectrum-related disorders growing more rapidly than ever, this training might be the logical step to to take to ensure that no other people suffer this harassment and inconvenience throughout their travels.

Autism is a Dirty Word.