Even though it is against the law to advertise alcohol to kids, I regularly pass a billboard that shows an ice-cream scooper peeling pink sorbet out of the way to reveal a bottle of Smirnoff Sorbet Light Summer Strawberry Vodka.

This billboard, like most billboards for alcohol and tobacco products, is in one of the poorer zip codes in town.

Make no mistake, billboard marketing is targeted just like any other product. And because the poor tend to drink and smoke more (I would too, if I couldn’t afford mental healthcare), it makes sense for tobacco and alcohol companies to advertise in poorer areas.

Unfairly targeting an entire socioeconomic class has caused a few uproars over the years. The New York Times ran a prominent article about this problem in 1989. Some cities, like Baltimore, even tried to combat the issue by buying billboards for city-sponsored public service announcements in strategic locations to reduce the amount of tobacco and alcohol advertising in poor neighborhoods.

Columbia University studied the phenomenon in 2007, releasing a report that showed something even more disturbing: it wasn’t necessarily poor neighborhoods that were targeted for this type of advertising. It was neighborhoods with larger African-American populations.

Even worse, there were implications that a connection might exist between health concerns in predominantly Black neighborhoods and the amount of tobacco and alcohol advertising.

This is scary stuff.

No matter what neighborhood is exposed to the flavored vodka billboard I pass, Light Strawberry Sorbet sounds like something on the menu of a father-daughter school dance, not an intoxicating adult beverage. Also, that billboard isn’t just seen by 21-plus eyes. I see school buses drive down the same road behind me. I see SUVs with tweens in the backseat.

How is Smirnoff not advertising to children?

Alcohol is too big of a cash cow to restrict entirely, but maybe there’s another way to fight back. Maybe the answer isn’t restricting advertisements, product placement and on-screen drinking.

Maybe it is including more counter-ads. Remember the, “This is your brain on drugs” commercial using an egg as metaphor? We need more of those, no matter how laughable they are because sometimes they make a difference. Maybe we can even make them realistic.

What if, for every second of screen time given to an alcohol ad or scene with alcohol consumption, one second of real-life alcohol use had to follow?

The four minutes of the party scene in 10 Things I Hate About You starts with a few dozen people pushing through the threshold of the party house, beer cans already popped, hands thrown in the air. It should be followed by four minutes of people yelling into each other’s ears because the music is too loud and they’re too drunk to have a conversation at a normal level.

The aww-inspiring 58 seconds of the Puppy Love Budweiser commercial, in which a yellow lab puppy and a Clydesdale beat the odds to be BFFs, would have to be followed by 58 seconds of a drunk driving accident.

For the three-minute-30-second YouTube ad for Smirnoff called “The Party,” which does everything from poking fun at hipster mixologists to showing off a raging dance party, there would need to be another three and a half minutes of bad karaoke from a girl’s night out. Three and a half minutes was more than long enough for me to butcher an entire Gwen Stefani song in my drunken karaoke days.

For print venues, the same principle should apply, expressed in inches rather than seconds. A sexy two-page Scarlett Johansson champagne ad would be followed by two pages of drunk college freshmen puking on a dorm hallway’s carpet.

On the other side of the Sorbet Light billboard would be a scene from a dive bar at 2:00 PM on a Sunday: two lonely men, one young and paunchy, one old and emaciated, sitting at opposite ends of the bar, shelling peanuts and staring at the television.

Maybe ads like these would bust the myth that alcohol is sexy and sophisticated.

Then again, maybe not.

I’m a recovered alcoholic. I know how ugly booze can be. But after clicking through dozens of flavored vodka ads, I found myself curious about what birthday-cake vodka would taste like.

I’ve been sober for over five years. I’d sooner walk in front of a moving train than take a drink. It would be a quicker, less painful way to die.

But I think alcohol in the media is even more influential than I thought. In fact, I know it. 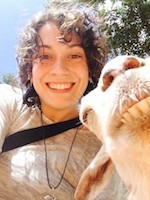