Nepal Earthquake: In the Face of Horror, There’s Hope. 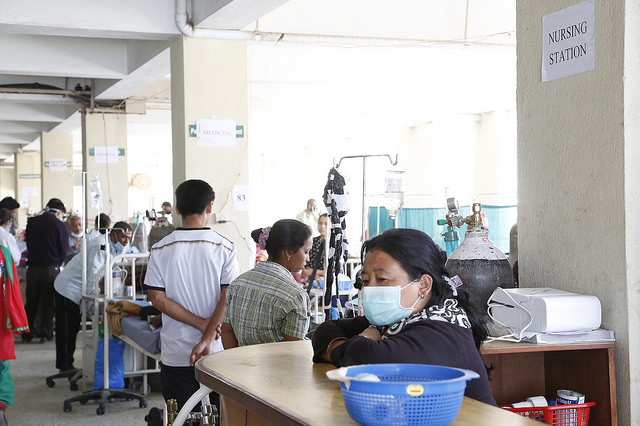 As I’m sure many of you have heard, a few days ago, a major earthquake crippled the country of Nepal.

I happened to be in the beautiful country, roaming through the crowded streets of central Thamel in Kathmandu at the time of the 7.9 quake. It is with the deepest sense of gratitude that I can announce that I am finally safe and sound, away from the immediate dangers which inevitably coincide with a natural disaster: famine, homelessness, threat of epidemic breakout and death.

I was in the middle of central Kathmandu when the earthquake initially hit. Walking down the crowded streets with a friend of mine, all of a sudden the ground dropped away from where it had been a second ago, and everything around us started shaking and swaying as if it were intoxicated.

Buildings began to crumble and fall, bricks and dust rained down from above and people scrambled in mass hysteria like a colony of ants; in these long moments that lasted an eternity, the world had ceased to abide by the laws of gravity and physics.

It was impossible to try to stand still because one second you would be standing there and the next, the solid pavement was no longer beneath your feet and you were left falling down onto uneven ground below where you were just standing. Solid, firm ground had become a precarious suspension bridge of terror without railings and surrounded by buildings with poor structural integrity.

I thought I understood what fear was.

Until this moment, I hadn’t even come close to comprehending true fear. Less than 50 metres to the right of where I was standing, just one block away from where I was staying for the night, a hotel collapsed down into a washing pit trapping 40 people and killing around 25. Instantly.

I was less than 50 metres away from my own death on a few different instances throughout the events of the earthquake, but this one has been burned into my memory. The dust and rubble that lingered over the desolation, the people that emerged covered in demise, the cries for help from the trapped and inaccessible, the bodies we could see but no longer moved, the dust and rubble creating a haze—all of this seemed like some sort of disgusting nightmare.

The adrenaline pumped through my veins as the shock began to set in. I felt sick to my stomach as I began to hear a chorus of sirens filling in the ominous silence that had hung heavily over our heads like stormy rain clouds.

My eyes scanned our surroundings as quickly as possible and saw roads that had cracked and fissured up like tectonic plates, creating miniature mountain ranges in the middle of the streets. Buildings that were not reduced to a pile of debris were laden with cracks which spread up like reaching roots. Everything shut down immediately as all the store owners fled home to check on loved ones.

Kathmandu was a nightmare of falling buildings and crushed people. I cant begin to imagine what it must have been like for the hundreds caught in the avalanches up near Everest Base Camp and along various other treks in the numerous mountain ranges Nepal has to offer.

I was in the process of writing a blog on my own experience hiking up to EBC when the earthquake hit. It’s difficult to imagine that this incredible landscape I had been exploring has been drastically altered and claimed the lives of thousands of people, some from all over the world.

I have never been in a situation in which, for days on end, I was scared for my life. Where, for days on end, it seemed as though the aftershocks would never stop, the horrible reports would never cease. It felt impossible for the world to keep spinning when everything around me had just been brought down to its knees in one fell swoop.

My heart bleeds for my fallen brothers and sisters I leave in Nepal, the roof of the world.

The thousands of individuals who have lost their lives, the hundreds of thousands whose lives have been forever altered by this devastating disaster, the ones who have lost everything, and the ones who are giving everything they have, my heart beats for every single one of them. I was lucky enough to call Nepal home for the last two months and I had nothing but unforgettable experiences while there. That my departure came at a time in which the entire nation is in such a severe crisis is a bitter end, to say the least.

All I’ve mentioned so far have been my thoughts and personal experiences during the initial earthquake and the subsequent waves that followed. I’d like to finish on a positive note.

The last few days before my evacuation were spent helping one another in any way possible. It was heart warming to see such warmth and determination from people who had just lost their families and homes. Their entire way of life had just been destroyed on a scale difficult for us fortunate westerners to even begin to fathom, and yet they found ways to smile, to laugh, to love and to cry.

My eyes caught a local man who had just walked up to a stranger sitting alone in the dirt and without saying anything, this man pulled the stranger to his feet and wrapped his empathetic arms around him. He held him with such love and warmth that within a few seconds the strangers arms swung up and clung to this man as if he were a life-raft. The tears streamed down their faces as a single unit, one affected soul bleeding with another, and together they stood crying with each other for a long time.

After this moment had passed and the two men thanked each other and went their separate ways, I watched the local man walk away with a broad smile on his face. I struck up conversation with him and plucked up enough courage to ask him one question:

He looked at me a second, looked away, then he took another hard look at me. He truly saw me, everything I was in that moment, standing there with my bleeding heart in one hand, my frightened and confused soul in the other. He locked eyes with me and with all the truth, love, and goddamn bravery any human could ever muster he replied.

In the face of horror, of loss, of death, of despair, the human spirit can find the slightest glimmer of hope. With hope, humans can do amazing things.

Urgent: Here’s How We Can Help Nepal Right Now.