When Mother is Not an Exclusive Title. 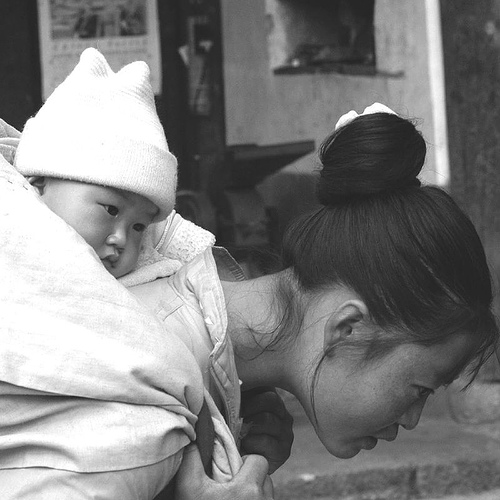 Birth. First. Real. Adoptive. I hate these words and what others call us.

We are mothers to the same daughter. Me in the U.S. and you in China.

You are who conceived, carried and birthed our girl. You are more to me than a container which held the amniotic fluid which bathed your-my-our baby.

Kai is the name I gave her. Did you have a name for her?

I wonder if, how, and who…you are. I wish I could let you know our daughter is wonderful and safe.

I’ve read that it’s the birth father and his parents who decide if a daughter is relinquished in China. Was that true for you?

When Kai was born was there an audible sigh?

Was there the heaviness of grief when a vagina was discovered instead of a penis?

Was relinquishment the price for being born girl?

Our custom is to yell, “It’s a girl!” with joy when a baby is born. It’s the typical traditional. I hope that doesn’t sound smug. I’m not some superior American.

When people tell me how disgraceful it is, the way girls are treated in China I say, “But they are a country that treats their elderly better than we do.” I mention too how poorly our veterans are treated, and those with addictions or mental illness.

I wonder how you felt and feel?

Was my-your-our baby scooped up and away?

Was she nursed with milk and tears?

What did she weight at birth?

When I met our daughter she was 11 pounds, and ten and half months. She didn’t come to me as a fresh to the world newborn. That’s how she arrived to you.

She came with a mysterious history, wearing an over-sized onesie and socks too big for her tiny ankles. She was in an orphanage enduring SARS (Severe Acute Respiratory Syndrome). I heard supplies weren’t as easy to get to the orphanages and people were sick.  My parenting was delayed so long I’d think of it as an elephant pregnancy sometimes (they last 22 months).

How was your family impacted by the outbreak of SARS?

Kai had a bald spot on the back of her head from rubbing it against a mattress. Her in-China pediatrician said it was a common self-soothing and self-stimulating technique. Babies play with their own bodies and use them for comfort too. It’s how they cope with languishing and neglect from a too-high adult-to-child caregiver ratio.

I’m not saying that to make you feel bad.  I wish she didn’t have to develop survival skills in infancy while her heart, bones and soul were developing.

More than a decade later Kai still flings her head from side to side when tired or stressed.  She no longer rocks so hard her bed slides across the floor. We no longer have the stuffed animal bumper to keep her head from knocking the wall.

Kai’s first year and a half will always be inside of her. The pregnancy too. It’s her foundation.

I know this in my bone marrow.

I’ve known since she was a toddler crying out in her sleep with night terrors. I knew as she would sleepwalk the halls and stairs calling “Mama-Mama-Mama” repetitively like a chant—but with urgency instead of calm.

Sometimes I worried I wasn’t encouraging her independence enough. But what does depriving her of love, comfort and my presence do when it’s what she needed? She’d gone without parents, play or enough food for too long. Never did I want her to wonder again, “Will someone come?” when she cried. I was trying to teach her to know her tears would elicit a consistent response.

Honestly ,there were times I thought I’d never feel rested again. But it also felt wonderful to be able to help her back to sleep by singing, swaying, rocking and holding her.

How did you get over losing her? Did you feel like a pumpkin, carved and scraped by a one-child policy? Did you rage or cry or try to fight to keep her? These are my unanswered questions.

Our girl is such an interesting person. She once asked me the place value of ten in the number 114 on the car ride home from school. I’m awful at math and wondered if she got it from you or her dad. Are you a mathematical mother filled with facts and reason?

She loves music and dance too. Is that you? In China, she tuned in to the Chinese opera on T.V. as we fed her bottle after bottle in the hotel room. When she first sat at a piano, she leaned over the keys and placed her ears on them as she played. She feels music. Do you get that too?

I wish my words were magical and could find you. I’d ask you to write back and tell me of Kai’s conception, pregnancy, labor and delivery story—because she lived it but can’t remember. Or maybe that’s not even my right to ask but belongs only to you and she?

There are voids and spaces I can never fill.

There are some divides no plane can travel.

Not then. Not now.

I’m a decent enough mother, I think, not perfect but I love Kai fiercely and try hard.

Kai’s hair is thick and black, long and shiny.

Now she styles it herself. For years, it slid between my fingers each morning when I asked, “Ponytail or braid?”

“Promise me you will never color this hair,” a hairdresser once said, “People pay big money to get hair like this.”

She said it as though Kai’s hair is something I should feel proud of responsible for—as though she inherited it from me. She didn’t.

“It’s her hair and I can’t take any credit,“ I wanted to say. I felt like I was taking a compliment for something you did.

But I fed her six bottles a day and fattened her up. It was me who researched attachment and brain development in between early intervention, physical therapy and cultural playgroups.

It always makes me laugh.

She’s her own person. She doesn’t really care what other people think. She remembers well and doesn’t judge. I wish I could say she gets all that from me. But she doesn’t.

We are not related, you and I. We are both mother to the same daughter though. I don’t know what that makes us or if there’s a word for it.

Mother for me is not an exclusive title. I share it with you and I want you to know how much that matters to me.

Abandonment, Adoption & the Place Between.