Toddler on the Verge of a Nervous Breakdown. 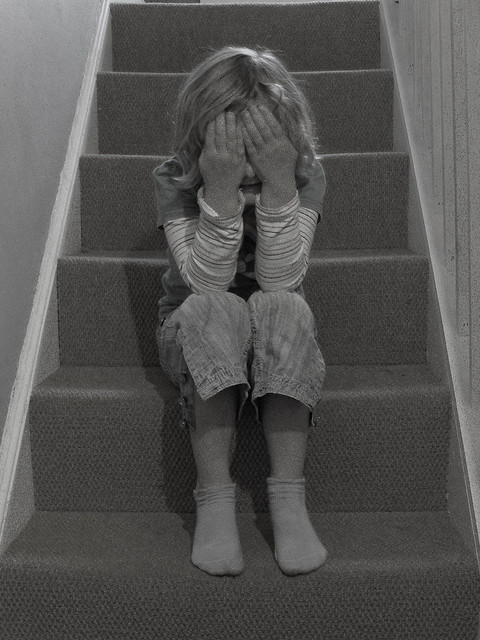 I took my two young daughters to the aquarium last week as a special treat.

The first two-thirds of the trip went beautifully—almost too good to be true, in fact: they were running around, owning the place, naming the creatures they saw, making beautiful observations (like: “the baby seal looks like [our dog]” and “do you think the giant spider crabs spin webs?”)

It was our best aquarium visit yet.

I marveled at my two budding marine biologists, wondering if any of the other patrons—or dolphins—were noticing how brilliant they are. I reflected on how exciting it is for me, as a parent, to watch their interest and fascination blossom at this, their favorite place.

But then, a bit after lunch, the sh*t hit the fan. The hammer came down. The record scratched: one of my two daughters (and I won’t mention which, in order to protect her privacy) fell apart.

She wanted a pacifier, something she knew was in the car, and though I calmly mentioned that it was in the car, it is impossible to reason with a toddler, especially when they are in the throes of a tantrum. She screamed louder and louder, and higher and higher until I started to fear that the glass on the fish tanks would break, and the sharks and jellyfish would be loose, among us.

Of course, I tried to pick her up. But she did the classic toddler move—the arched back, the perilous acrobatics out of my arms—every time with the perfect torque. I had left the stroller at home, otherwise I would have strapped her in and run out with her.

So I did what you do when a natural disaster hits when you are in a public place: I tried to determine the fastest route out.

We were at the furthest point from our car, easily a half-mile through the aquarium. As we inched our way out, I tried everything to get her to stop screaming and start moving. I tried bribery. I offered her water, milk, toys, my keys. I tried my softest sweetest voice, then, when that didn’t work, my lowest sternest voice.

Sweat was p*ssing out of my pores, raining down my face, neck, and chest. Young, carefree, teenage types walked by whispering to each other.

I didn’t hear what they were saying, but I can guess it was along the lines of: “Remind me not to have kids. Good Lord.”

There cannot be a better form of birth control than a mid-tantrum toddler.

There were some sympathy glances from other parents (I considered offering a thousand dollars to buy the pacifier out of the lips of some babe or the purse of some parent). I also received some looks of scorn. More specifically, they were “control your kid already” looks (which, I will admit, I deserve, since I too was once one of those non-parents. I wrote a whole book, essentially, judging parents prior to being a parent. Was this aquarium tantrum my punishment for that crime?).

I remember hearing tantrums before I had kids, and wondering how any reasonable parent would allow that…oh, the things I didn’t know.

And then the worst reaction. The one you don’t get too often, but when you do, it sears right into you: the “are you a kidnapper?” one.

People never come out and say it to you directly, but, rather, approach with trepidation, as if you may stab them on the spot. They say things like: “Hey, what’s going on here?” and “Do you know these children?”

I want to say, “Do you really think I would want to take this home with me if it weren’t the fruit of my loin?” But instead, I smile apologetically, nodding that they’re mine, thanking them for the concern, fantasizing for a split second about walking away from my screaming child altogether.

By that time, we were by the seahorses and I am pretty sure that they, too, were judging me. That’s the problem with being a recovering judger: you assume everyone views you through the same lens. My initial anger, frustration, and embarrassment had all melted into more massive amounts of sweat. I was covered in a slick sheen of it, plus flop sweat down my neck and back. And the very rare cheek sweat. To be clear: this was not run-off from the trickle down of forehead or brow sweat.

This was bonafide, unaffiliated cheek sweat.

Finally, after 45 minutes of ear-piercing screams, I got the three of us to the car. The instant the pacifier hit her lips, she was not only quiet, she was perfectly normal again, as if the previous hour hadn’t even happened. And as I was pulling out of our parking space, I peeked again and she was fast asleep. And somehow, she looked like an angel. Just minutes after I was sure that her head might spin around a full 360 degrees like the little blonde in Poltergeist, there she was, perfect: tiny face, eyes closed, hands folded. I could see her chest lifting and letting go. If she wasn’t already dreaming, she was on her way.

And so was her sister. The car was silent.

My heart was still racing. I drove home, in my eerily quiet car, feeling a strange sense of relief, regret, guilt, and nostalgia. I felt nostalgia for the first half of the visit: the running, the questions, the joy. And I felt this rush of sadness that they are growing up so fast, and soon won’t want to go to the aquarium—or anywhere else—with me. I felt myself tearing up, wondering who was having the nervous breakdown now.

I like to think that in five or ten years, I will remember the first half of the trip more than the second. The great part, not the frustrating part. About the visit, about the whole shebang. I can’t be sure. But I know this much is true:

They don’t call them pacifiers for nothing.

The Chaos & Calm of Single Parenting.