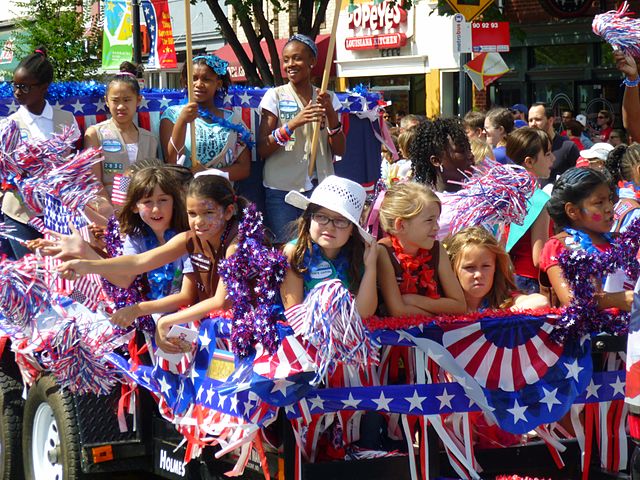 On Thursday, at the school where I teach writing in a summer program, there were many displays of red, white, and blue: lots of kids and some teachers wore these colors and the office was decorated in them, and plastic American flags.

The atmosphere vibrated with patriotism and chatter about plans for the big day.

“I see you’re ready for the Fourth Of July,” I said at the beginning of class.

“Miss Brittany,” one of my 4th graders said. “You forgot to wear red, white, and blue.”

I glanced down at my black dress with white flowers and smiled. “Oh well…” I said. “But you guys look great!”

The thing is, I didn’t choose to wear those colors, because patriotism is not something I’m good at. And it’s not really something I care much about. Yet my students are too young to know and fully understand some of the harsh truths of America “Land of the free, Home of the brave.”

As I kid, I enjoyed fireworks as much as any other, and remember my favorite show over Lake Tahoe, where my family sat on the long pier with dozens of others. It was especially thrilling to see fireworks over the ocean. But my kid self never thought anything about what happened to the fireworks when their sparks showered down from the sky. It never crossed my mind that it could be bad for the ocean and the wildlife, that it was a source of pollution and toxic release in the atmosphere.

As an adult, I’ve gone to see fireworks some years and other years I haven’t. As I’ve gotten older, I’ve become less involved. And I also started caring less about this national holiday than I used to. I figure I’ve seen enough firework shows in my life, so I don’t feel like I’m missing much if I do not drive with the masses of cars to get to a viewing spot.

I’m not trying to be a downer about this much loved, much celebrated holiday, but here are the reasons why I won’t be partaking in the normalized festivities today:

There’s something somewhat magical about the sky lighting up in bursts of color and then dissipating against a chorus of “oohs” and “ahhs” from spectators, but fireworks, as one might guess, are not healthy for the environment. For one, it’s a fire hazard and some firework shows have been banned during certain years in especially dry areas. They also contain toxic elements. Science journalist Russell McLendon writes, “Fireworks get their flamboyance from a variety of chemicals, many of which are toxic to humans. From the gunpowder that fuels their flight to the metallic compounds that color their explosions, fireworks often contain carcinogenic or hormone-disrupting substances that can seep into soil and water, not to mention the lung-clogging smoke they release and plastic debris they scatter.”

He also says that the “toxic concoction” of fireworks rains down into lakes, rivers, and bays.

Further, fireworks are packed with heavy metals, and although the exact effect of their “heavy-metal fallout” isn’t fully known, scientists do know that aluminum, strontium, barium, and cadmium can cause significant health problems.

Why don’t we celebrate the independence of our country with something that’s healthier for it? Is polluting the air and water a patriotic way to recognize this holiday?

Fireworks have been proven to be detrimental to companion animals and wildlife. Explosive fireworks cause animals immense fear and stress. Animals who are too close to explosions often suffer burns, eye damage, and ear damage, as most animals have more sensitive ears than humans do. Many dogs are terrified of the noise and escape, which makes them prone to getting hit by cars, lost, or ending up in shelters. The organization Last Chance For Animals states that more pets run away on Fourth Of July than any other day.

Many wild birds fly away in fright and nesting mothers sometimes cannot find their own nest upon return. Imagine if an explosion went off in your home, with no knowledge that it was going to happen and no understanding of what it was.

A 2014 National Retail Federation Study estimated that 153 million adults attend cookouts, barbecues, or picnics. It’s estimated that people will consume 150 million hotdogs, 700 million pounds of chicken, and 190 million pounds of red meat, even though numerous studies have shown that this Standard American Diet (SAD) has negative effects on human health. Next to Father’s Day, the Fourth Of July has the largest number of barbecues nationwide. In a Huffington Post article, Kathy Stevens says, “Burgers, hot dogs, barbecued chicken, egg salad, and other July 4th favorites might taste delicious. But they are also products of intensive confinement and systematic torture. To put it bluntly, on July 4, we torture many species as we celebrate one species’ freedom.” She contines by saying to go ahead and fire up the BBQ, as veggie dogs have come a long way over the years, there are lots of recipes for great veggie burgers, and Vegenaise is indistinguishable from mayonnaise.

Even though I don’t eat meat, I’m not against going to barbecues (I’ve had good fun at them and I’ve had fantastic veggie burgers on the grill), but I do not support the meat industry and so for me, barbecues are one more way that our culture promotes unhealthy eating, and the continuance of highly cruel factory farm practices, as well as impacting the environment negatively. This article on One Green Planet says, “From start to finish, factory farming is responsible for the abuse of land, animals and natural resources all for the express purpose of providing cheap unhealthy food to large amounts of people.”

Millions of folks across America will be ingesting that food today in the name of celebrating our country’s freedom. And while Independence Day is a statement of freedom, there are billions of beings that live in America that have never been, nor ever will be, free. Some of them may hear the fireworks from where they live, but I’m not even sure if they’d be frightened because they already live in a nightmarish hell on factory farms.

There are various examples of excessive consumption related to the Fourth of July: wasteful paper products and decorative items, such as plastic and paper flags end up in our landfill, and the way that the typical Fourth Of July All American diet of hotdogs and hamburgers uses massive amounts of water. Animal agriculture water consumption ranges from 34-76 trillion gallons annually.

Growing crops for livestock consumes 56% of the water in the U.S. Further, Animal agriculture is responsible for 18 percent of greenhouse gas emissions, which is more than the combined exhaust from all transportation.

The effects of America’s consumptive habits are far reaching.

In general, America is oversaturated with commercialism, and this is brought to the forefront through holidays. The American Pyrogenic’s Association reported that the 2014 revenue for display fireworks was 332 million and the consumer fireworks revenue was 695 million. Rather than for brief entertainment, I think our nation’s money could be better spent on causes that will help the planet, not damage it.

With all that said, it would be unrealistic to say that I’ll never see another fireworks show in my whole life; it’s just that my perspective of this popular holiday has shifted over the years.

Another thing—I’m not really into explosive sounds that remind me of gunfire or bombs (our country has enough reminders of that.) And I’m definitely concerned for our environment.

Vegetarian, Organic 4th of July Picnic Ideas (Minus the Bugs).