My awesome Star Wars Blanket & other Musings on Security. 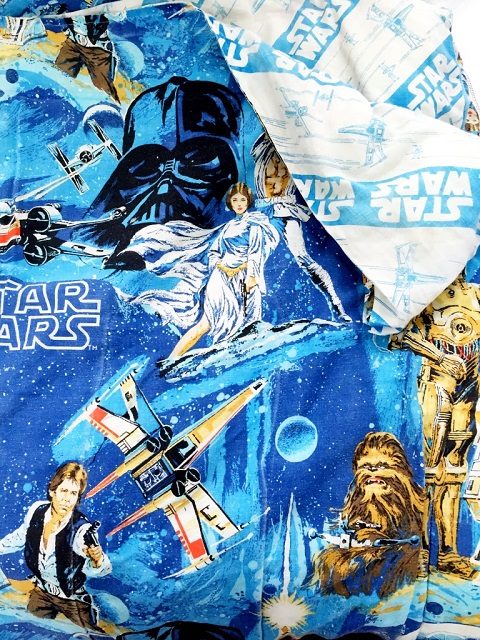 Not so long ago, I was a five-year-old girl who wanted a Star Wars sleeping bag for Christmas.

I wrote Santa a letter asking for it. But just in case my letter got lost in the mail, I pestered my mom until she took me to Higbee’s department store to sit on Santa’s lap. A face-to-face meeting with the jolly, old guy would hopefully seal the deal.

There was nothing particularly special about this sleeping bag. It was midnight blue with pictures of all the Star Wars characters on it—Luke Skywalker, Princess Leia and Chewbacca were placed all over.

But the coolest part? It was reversible. The other side was white, with the Star Wars logo emblazoned in blue. I decided that this would be the side I’d sleep in, leaving my favorite characters showing on the dark blue side, for all the world to see.

Star Wars was the first movie I saw in a theater. One hot summer afternoon, my mom took my friend and me to a dark, over air-conditioned theater in our neighborhood shopping plaza. With a tub of popcorn between my legs and my feet far from reaching the floor, I was transported to another world of furry creatures, talking robots and light-sabers.  I had no idea stuff this good existed.

For the next six months I was consumed with Star Wars. I saw the movie three more times, collected the toys and trinkets, and wore my hair like Princess Leia. And when I saw the sleeping bag in the JC Penney catalog, my focus was laser sharp. I had never wanted anything more.

Santa was good to me that year. I awoke on Christmas day and found my sleeping bag unrolled under the tree, with many other presents sitting on top of it. I pushed away all the other gifts and climbed inside the sleeping bag. It was warm and cozy.

I pulled the top of the sleeping bag just under my nose and inhaled. It smelled of polyester—the 1970s version of brand-stinking-new. I gazed up at the colorful Christmas tree lights, slinked around inside my sleeping bag and giggled.

Unlike other gifts that I grew tired of, my sleeping bag remained essential. Over the next six months, I’d cozy up in it with a flashlight and read books. Some nights, I fell asleep in it on my bedroom floor. When my mom insisted that I sleep in my bed, I put my sleeping bag on top of my bedspread, slid in and went to sleep.

As time went on, my parents grew distant from each other. My father worked later and later, and when he was home, the sound of their arguing filled the hallways of our house. I’d seek refuge in my sleeping bag. Pulling it snugly just below my nose, I’d lie there and pray for silence.

When I was 14, my parents divorced, and my mom and I moved into a smaller house. I hated my bedroom. The closet doors stuck and my bedroom window faced the street. I could see all the kids in my new neighborhood running and playing and having fun. I stayed inside mostly, unsure that I’d fit in.

To make me feel better about the move, my mom bought me a new bed. A fancy, white double bed, with gold trim outlining the flowered headboard. I hated my new bed more than I hated my new room. The bed was girly and big—I felt lost in it. I missed my boring, single bed, which she gave to my brother. I’d been upgraded, but it sure didn’t feel like it.

As I unpacked my boxes, I spotted my Star Wars sleeping bag. I wondered if I was too old for it. Even if I wanted to use it, it was way too small for my double bed. But then it hit me—for the first time since jumping in it that Christmas morning eight years before, I unzipped my sleeping bag, turning it into a blanket.

I stood on the side of my ornate bed and fanned the blanket up toward the ceiling.  As it floated back down, the smell of our old house filled my nose. When the blanket settled perfectly over my bed, I flopped down on it, looked at the ceiling, and cried.

For the next two years—I slept, dreamt and found comfort under that blanket.

I didn’t care what my friends thought of it or who made fun of it—it made me feel safe at a time when little else did.

When I turned 16, the blanket made it’s way to the end of my bed—neatly folded and placed on top of my hope chest. On top, not inside, because a few nights a week, I’d pick up the corner and drag it up to the bed while I watched a movie or read a book. And every now and again, I’d pull it up when I had an argument with a friend or cried over a boy.

When I went away to college, I left my blanket behind. And from dorm to dorm and apartment to house—that blanket stayed in my old room, waiting for my return.

When I got married, and moved permanently from my childhood home, I considered throwing away my blanket.

Surely wouldn’t need it anymore? I was a grown woman—a lawyer, a wife. I had a house, my own car—I even had a dog. But I couldn’t bring myself to do it. Instead I folded it and placed it in a clear plastic cover, zipped it securely and put it in a storage container. And there it stayed for five years.

A lot can happen in five years—I realized I don’t like my job. I realized I no longer was in love with my husband. I found myself and my dog starting over in a new house, with a new job, in a new part of town and making new friends.

Once again, I found myself unpacking and settling in. This time I didn’t hate my new bedroom. In fact, I liked it. It was smaller than the bedroom I had shared with my husband, but this room was all mine. It was quiet and peaceful.

While I was unpacking, I came across my old blanket. I poured a glass of wine, and sat on the bed. As I traced the outline of Chewbacca’s face with my index finger, I thought about all the tears that I wiped away with that blanket. I remembered all the times I had waited out the emotional storms of my life under that blanket. I laughed, thinking back to all the plans I’d made for my life, nestled in the warmth of that blanket.

It’s been 10 years since my divorce and the last time I used my blanket. In the time that’s passed since, I’ve found my passion—both personally and professionally. I’m in love, and I’ve re-married. I do what I love every day. But funnily enough, while cleaning out my guest room closet recently, I ran across ol’ Star Wars again.

I took it out, laid it on the bed and plopped down on it—just for old times sake. It was a little faded and worse for wear, but it was also as warm and comforting as it always had been. I breathed the story of my life onto the threads of that blanket—the losses, the triumphs, the emotional stalemates.

It was then that I realized—I still wasn’t old enough to give up my blanket. At 42 years old, I still have a lot of life to live.

There will, hopefully, be more triumphs than losses, but just in case I ever need a little comfort—I folded ‘ol Star Wars back up and tucked it, within reach, on my closet shelf.

Your Life is a Beautiful Blanket. 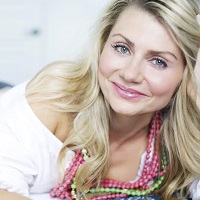