Of Mums & Maids: the Controversial Clip that Launched the #Igiveadayoff Campaign. 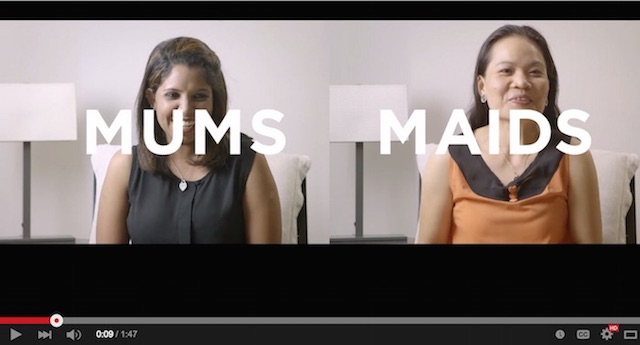 Do human rights campaigns always get it right? Can they do more harm than good when they get it wrong? Is guilt an effective agent of change?

These are some of the questions I set out to answer when I came across a recent campaign by non-profit organization Transient Workers count Too (TWC2), aimed at improving the working conditions of foreign domestic workers in Singapore, where approximately 40 percent of Singapore’s 222,500 domestic workers do not have a weekly day off, despite the 2013 legislation making this mandatory.

While the campaign itself has an air of brilliance and professionalism about it—provided by prestigious international advertising agency Ogilvy & Mather who created the “Mums and Maids” clip that spearheaded the campaign—it was met with some fairly explosive reactions on social media, in particular on Twitter, with the hashtag #Igiveadayoff.

The “mums and maids” clip attempts to draw a link between giving your maid a day off and spending more time with your own children.

The clip shows pairs of mums and maids being interviewed on the subject of their charges’ daily habits, likes and dislikes, fears and aspirations. The same questions are then asked of the child, to establish who has the correct answer.

The clip concludes that 74 percent of maids had more correct answers than the mother.

Some social media users have highlighted just how valuable the campaign has been in getting people talking about the issue in the first place. Others are upset, feeling that the campaign is capitalizing on the “mommy guilt” of working moms. Others worry that it could strain an already delicate relationship between that of the employer and domestic worker.

Still others just think the campaign has missed the mark—that it’s not highlighting the underlying issues. More cynical commentators felt it was a prime example of an international ad agency capitalizing on an opportunity to gain some PR for itself and paint itself as a business with a human front.

For me, the means justify the end.

If some fancy-pants ad agency creates a campaign that effects a sorely needed change and improves the lives of vulnerable people, I have no problem with them simultaneously upgrading their profile. But—I do think the message is inaccurate.

My experience of the lives of foreign domestic workers comes in the form of Nelly, Nelly the super-nanny from the Philippines, who looks after my children while my husband and I work, sings raucously to my children in quite good English, but who now has them pronouncing their r’s as l’s and who generally prevents us from falling apart while we work abroad far away from our own families.

There’s a darker side to Nelly’s career in the Middle East/Gulf region. Nelly, a qualified elementary teacher, first left her home in the Philippines and her 5-year-old son to go and work abroad as a nanny. (By living in, she can try to send 90 percent of her salary back home, where she is the only breadwinner). Nelly saw her son five years later when he was 10, as her Lebanese employer needed her to care of his aging mother so badly he couldn’t let her take a vacation.

Nelly came to us in debt as she had had to buy her way out of an employment contract from 3 years previous to her post with us at a sum of $100 a month (her salary was $200 a month at the time). She left because her employer made her work from 7 a.m. until 3 a.m. the next morning every day without a break.

The 2013 ILO report, Domestic Workers across the World- Global and Regional Statistics and the Extent of Legal Protection, cites that there are at least 53 million foreign domestic workers globally, more than a half of which have no statutory limit on their weekly working hours.

So why’s it so complicated? You hire someone, they do their duties and you give them their dues- their salary, benefits and the appropriate time off according to local labor laws, right?

I did some digging around in my own community—Abu Dhabi, UAE—attempting to find some explanation locally as to why employers don’t give their maids a day off. The complication consistently seems to arise when you try to define a “day off.”

“Define day off,” my cousin in law asked me. “Because for me, a day off for my maid is when she doesn’t do her normal cleaning duties and she can come out with the family to picnics, parks, the supermarket or the cinema.”

He doesn’t let his maid go out for the day because he is afraid of unwanted pregnancies, STDs and hangovers. This fear was echoed by my female Emirati college students who, after digressing from the main question to compare horror stories of maids who murder children and put black magic spells on their employers, concluded that maids could and should have a day of rest—but that they should not be allowed out of the house because they will bring trouble or run away and never comeback.

So, why are maids running away in the first place?

Nelly would have been classed as an “absconding foreign domestic worker” here in the UAE (and therefore liable for a prison sentence), had she not shackled herself with the financial burden of buying herself out of her employment contract.

Sitting on our front step last night watching the neighborhood kids play together under the supervision of a group of nannies, Nelly told me, “Those women aren’t happy, they are supposed to get $180 a month but their employers only give them $120. Those two jump out of the window at night to meet boyfriends who give them food, clothes, money. The older Emirati lady beats the Ethiopian girl.”

No report can provide anywhere near accurate data about the number of foreign domestic workers whom are abused and exploited behind closed doors by the employers they depend on. The ILP report 2013 states,

“In the case of migrant domestic workers, in particular, their often precarious legal status and lack of knowledge of local languages and laws makes them especially vulnerable to abusive practices. Reports of physical and sexual abuse are frequent”.

I am really feeling that the “mums and maids” clip has not grasped some of the major issues involved. Dr Saliha Afridi, PsyD, of Lighthouse Arabia—a mental well-being clinic based in Dubai—is also not convinced that the clip will be effective. For her, guilt cannot effect long-lasting change or address the underlying issue of the problem—but it can provoke a negative reaction.

Also, she highlighted that the video targets mums—why not dads? Why’s the pressure on mums? From my experience in the Gulf, I see that a lot of decisions around domestic staff are actually made by males. Furthermore, she also raised the issue that even the most attentive parents wouldn’t be able to answer all questions about their children all the time. I’m pretty sure that my two-year-old loved cheese triangles this morning—will she still be enamored by them this evening?! My cousin-in-law who doesn’t give his maid a day off in the accepted sense, is a dedicated father who probably could score quite high on most of the clip’s questions.

However well-intentioned TWC2’s “I give a day off” campaign might have been, it does seem that its main message aimed at encouraging employers to give their employees a day off so as to create an opportunity for parent-child bonding is irrelevant in effecting the type of change foreign domestic workers need.

Maybe a campaign that looks more closely at building better relationships between employers and foreign domestic workers would be a good starting point. 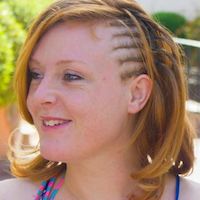