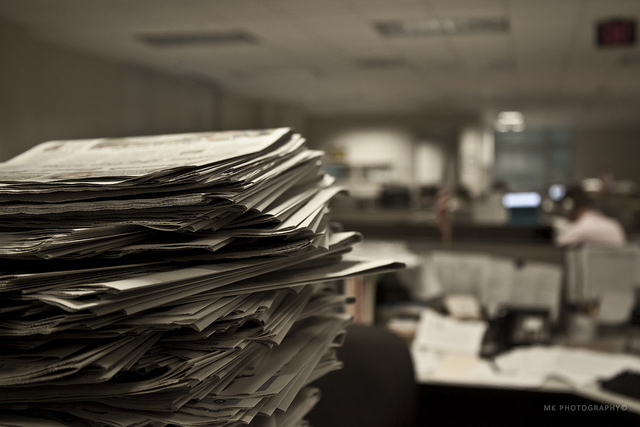 “Journalism’s first obligation is to truth, its first loyalty is to citizens.” ~ Elements of Journalism by B. Kovach and T. Rosenstiel.

Quite truthfully, I am spellbound by the above statement.

As a writer for elephant journal, I have made my own attempts at journalism, in posts that sought to bring attention to important social issues.

I believe strongly that one cannot make good decisions on any subject without access to reliable, accurate facts. Knowledge is one of the cornerstones of wisdom. Many times, I have relied on journalistic efforts to provide me with a framework for decision making.

“Good decision making depends on people having reliable, accurate facts put in a meaningful context” is another quote from same book.

I, as a citizen of my country and the world at large, put my faith in the “truth” as presented by newspaper, television, online and radio journalists. A self-admitted conspiracy theorist, I am somewhat distrustful of swallowing information wholesale even from trusted or respected sources.

One of my favorite mantras is “Who’s watching the watch-dog?” Journalism is what I depend on for serving as the watch-dog within society, for giving a voice to the voiceless, but there have been times when I, in my own mind, questioned the reliability of what I’ve heard in the news.

“Journalism does not pursue truth in an absolute or philosophical sense, but in a capacity that is more down to earth.” ~ The Elements of Journalism

My propensity towards distrust of the party line (left over from parents who lived in a Communist country) drives me to ask questions once my questions have been answered.

Therefore, when I read that journalism is about a “practical and functional’ form of truth which is gathered from verified facts, and that all truths are “subject to revision” I feel justified in guarding myself from an immediate reaction to what I hear or read.

This is important by my reckoning because I have been deeply affected by certain news events that were reported earnestly but which I now know contained that ‘subject to revision’ form of truth.

The incident that stands foremost in my memory is the reporting of events that happened on 9/11.

I can clearly see myself in my bucolic surroundings that day, which were far removed from the chaos in New York City. I stood on a sunny hillside on a Canadian farm where I was gathering herbs and lettuces for the day’s community shared agriculture scheme. Someone had gone into the farmhouse where the television was playing and ran out to tell me the news of airplanes hitting buildings and that terrorism was suspected.

One could not imagine a different juxtaposition of events in my life that morning. Peace and War are on opposite ends of the human experience and this experience was making me nauseous and found me staring at the television in disbelief.

Clearly, I did not want to believe it and furthermore I hoped that the television journalists had their facts straight because they were dispensing more than words.

In fact, the words they were dispensing were weighted with fear and confusion, and by the repetitive nature of their broadcasting, they were lulling me into a state of indoctrination of the presumed facts.

The journalists on that day faced an unforeseen amount of responsibility to the public. Truth was indeed colored by their own commentary, their analysis of the events, with no time for them to process their own reactions. They had at their disposal a limited knowledge of the events, and as such were bound by this limited truth.

Bill Kovach and Tom Rosenstiel write that the greater truth, over time, emerges from the forum of a journalist’s fair and reliable accounting. Or so one hopes. However, in the moment of digesting a journalists report, we are in a position of trust to them.

We trust that we are hearing facts. Even if the report tends towards sensationalism or voyeurism, which I think journalism can be prone to, it must be based on facts.

I’m fiercely proud of what elephant journal asks of me should I act as journalist in my blog post. I am asked for these things:

Of course every journalist is asked for verification and factual reporting.

When I add mindful context and a call to action, I offer the reader more than facts. I offer the reader the chance to see the situation from a possibilities perspective rather than simply an accounting of events that might leave them feeling hopeless about the human condition.

In my opinion, which is not fact, but simply an assessment of the journalistic world, it would benefit all of journalism to adopt elephant journal’s standards.

Yes we need verified facts, the world is spinning with too much news aimed at gossip and entertainment.

But we also need hopeful, compassionate reporting in order to create change from those reported facts.

I hope to be part of that change with elephant journal as my guide.

“I became a journalist because I did not want to rely on newspapers for information.” ~ Christopher Hitchens

“Myth is much more important and true than history. History is just journalism and you know how reliable that is.” ~ Joseph Campbell

“No honest journalist should be willing to describe himself or herself as ’embedded.’ To say, ‘I’m an embedded journalist’ is to say, ‘I’m a government Propagandist.” ~ Noam Chomsky, Imperial Ambitions: Conversations on the Post-9/11 World

“In the English language, it all comes down to this: Twenty-six letters, when combined correctly, can create magic. Twenty -six letters form the foundation of a free, informed society.” ~ John Grogan, Bad Dogs Have More Fun: Selected Writings on Family, Animals, and Life

“I believe in equality for everyone, except reporters and photographers.” ~ Mahatma Gandhi