Sometimes Doing Nothing is Doing Everything. 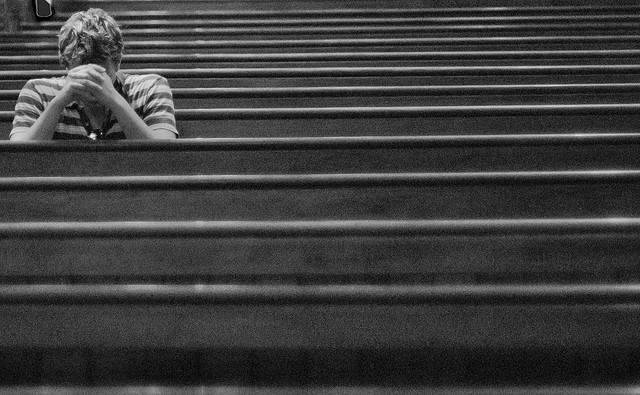 We had returned to the Rose Garden Inn to retrieve something we had forgotten only to find our way to the parking lot blocked by emergency vehicles. As we approached our room it was obvious that something was happening in the room right next door to ours.

Firemen and emergency personnel were milling about, some going in and some coming out of the room, and an empty stretcher was standing ominously outside the door. I saw Jose, the groundskeeper, nearby and, having spoken to him on several occasions when we had stayed at the Inn before, went over to him.

Did he know what happened?

He did. The “old lady” who was in the room had “stopped her breath.” She was very sick and had been in the room with her husband for several months. They moved in after their house had burned down.

From where I was standing with Jose I could look into the “old lady’s” room with its door now standing open and see stacked along the walls rows of moving boxes hung with clothing, papers, plastic bags, empty to-go food containers, trash and litter. The floor appeared to be similarly strewn, and the room was dark. With no lights on inside and no light shining into it except through the open front door, it had an ominous, cave-like look.

Later, when we returned to our rooms for the evening, I noticed the husband of the sick and/or dying woman sitting by himself outside the now-closed door to his room and told him that I had seen the rescue people there earlier.

“I hope everything turned out all right,” I said, more because he looked so ghostly and alone than because I really needed to know.

But things hadn’t turned out all right.

“My wife died.” he responded blankly. Pale blue eyes. Pale hair on his head. Pale skin. Everything about him pale.

He stood and opened the door to the dark room and turned to look at me for a moment with his watery, unearthly eyes before he went inside.

“Can I say a prayer?” I asked him. But no, I couldn’t say a prayer. He was angry. Angry at God. It was kind of me to offer. But no. No thanks. No prayer. In fact, he was still saying something to me about my kindness as he went inside and closed the door on that awful mess, on that awful room, on that awful bed in which his wife—no matter what she died of—died her awful death.

I sat on the edge of the bed and spoke—to somebody? To God? I couldn’t say.

But I spoke and asked that he/she/it bring peace to the spirit of the woman next door, that he calm her soul and take from it all the debris that it had been carrying and that he allowed her to soar above the clutter and the hopelessness of her small, cramped quarters.

I prayed that the husband I had spoken to be shown a way to connect with his source of being in some way other than anger.

And I rebuked the energy of darkness that had invaded the space and therefore the lives of both of them and asked that such darkness be removed from the Rose Garden Inn in general and from the room right next door to us in particular. I asked who or whatever I was talking to, to blow the dark energy up, up, up into the sky, where it would fade away and be absorbed.

I asked finally that the lesson that was written in such timing—my being in one room at the Rose Garden Inn in Berkeley, California, while a woman was dying in the next—be revealed to me.

My husband happened to be outside our room when the coroner came and removed the body of the dead woman, and I realized that even as I had been talking with the pale husband outside the door of their room and he had turned to go back into it—even as I had been sitting on the bed praying—the woman’s lifeless body had still been there.

The next morning, my husband and I began our departure ritual. The bags were packed, the room was checked for anything forgotten, and we headed towards the dining room for the complimentary breakfast. Just before I closed and locked the door one last time, I looked at the bed.

I could see her lying there.

And that was when I knew.

That was when I knew what the lesson for me was. That was when I knew that sometimes we are called to be nothing more than a witness—nothing more than to be the person next door who looks into a room and sees darkness, who reaches out with hope that everything will be all right and who prays for that darkness to be lifted up, up, up into the sky to fade away and be absorbed.

Sometimes we are called to do nothing more than that.

Grief: The Gift Wrapped in a Thorny Bow.