The Best Quote About Self-Love by Amy Schumer. 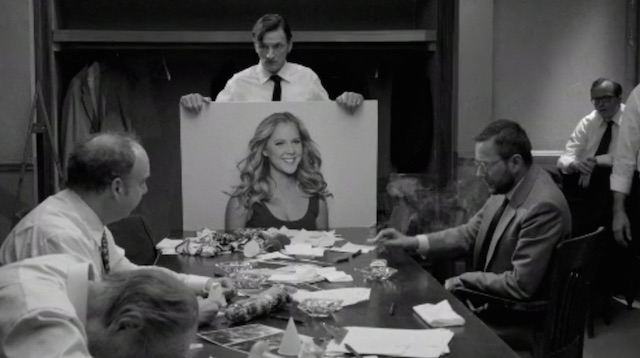 Comedian Amy Schumer has never been shy about saying what’s on her mind.

However, it’s what she said about in the August 2015 issue of the magazine that resonated with me the most:

“Men can look like whatever and still date a supermodel…I have a belly. And I have cellulite. And I still deserve love. And to catch the old D. And to not apologize.”

As a woman, I can relate to this for I, like many women, have believed for most of life that my self-worth was largely dependent on how I look.

Growing up, I didn’t fit the typical norm of Western beauty. In a culture that defined the All-American girl as tall, tanned and blonde, I was short, pale and dark. Despite never having had a weight problem, I wasn’t exactly “toned” either or at least no where near the ideal that peered out at me from the pages of Seventeen magazine or magazines like Glamour. (It never occurred to me back then that those images could have been altered.)

I can recall the first guy I ever dated in high school remarking that on a scale from one to 10, I was “barely a five.” It didn’t matter that this man was a good 15 lbs or so overweight and not attractive by anyone’s standards—I took what he said to heart. I also never questioned why it was okay for him to lust after cheerleaders and model-types or why that wasn’t called out as unattainable, whereas the mere idea of him thinking that I was above a “five” was okay.

I wish I could say the above was an isolated incident, but it was not.

While I never had anyone put it quite so rudely as that particular individual did, I did encounter others who made remarks along those lines. Even if they weren’t directed at me but at other people, the message was still clear: in order to be seen as desirable/lovable/sexy, a woman has to look a certain way.

Therefore, it is helpful to hear Amy Schumer’s words and hear them come from someone who looks like her. While I think she’s a lovely-looking woman, she is the first to point out she is hardly an object of desire by Hollywood standards. At a self-proclaimed “160 lbs,” her body type is virtually never seen among leading ladies. (While there are larger actresses in show business, they are overwhelmingly cast as the best friends, the sidekicks, or the funny ones.)

In all fairness, other actresses have made body positive comments, but few of them carry the sort of weight that Schumer’s do. For instance, when I came across a quote a few years ago by the then 37-year-old Penelope Cruz about how she intended to grow old gracefully, I had to laugh. I don’t doubt her sincerity, but hearing this from a woman who was yet to be old was kind of funny. It doesn’t mean she can’t be sincere, but it’s different when someone who has walked the walk comments.

In Schumer’s case, she clearly has walked the walk as well as talked the talk. She’s not talking about if she has extra weight on her belly: she has it and she is beautiful and she is absolutely correct in her quote.

Therefore, the next time any of us feel our self worth is attached to how we or others perceive our looks, we’d do well to remember her words of wisdom.

Very very honored to be nominated for 2 Grammys and to be considered to play an important and evolving icon. Is it fat shaming if you know you're not fat and have zero shame in your game? I don't think so. I am strong and proud of how I live my life and say what I mean and fight for what I believe in and I have a blast doing it with the people I love. Where's the shame? It's not there. It's an illusion. When I look in the mirror I know who I am. Im a great friend, sister, daughter and girlfriend. I'm a badass comic headlining arenas all over the world and making tv and movies and writing books where I lay it all out there and I'm fearless like you can be. Thanks to everyone for the kind words and support and again my deepest sympathy goes out to the trolls who are in more pain than we will ever understand. I want to thank them for making it so evident that I am a great choice. It's that kind of response that let's you know something's wrong with our culture and we all need to work together to change it. Anyone who has ever been bullied or felt bad about yourself I am out there fighting for you, for us. And I want you to fight for yourself too! We need to laugh at the haters and sympathize with them. They can scream as loud as they want. We can't hear them because we are getting shit done. I am proud to lead by example. "I say if I'm beautiful, I say if I'm strong. You will not determine my story. I will" #thegirlwiththelowerbacktattoo