The Worst Summer of My Life. {Funny} 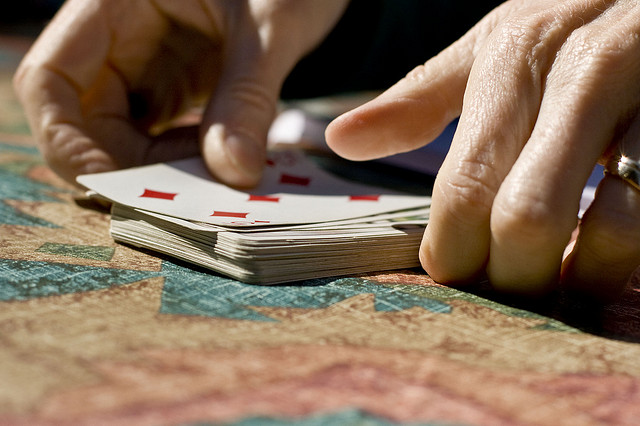 Canasta: A card game for two to six players requiring two or three decks of cards in which the object is to obtain melds of 3 or more cards of the same rank.

In the early 1950s my family and I moved to Lennox, California.

An old lady named Mary Mosier, whom everybody called “Moe,” lived next door in the old, gabled, Victorian house that had probably been the original homestead on the block.

One of the first things Moe proudly told me, pointing a gnarled finger up to the second story front window, was that she had been “born up” right there in that front bedroom and to me, a 10-year-old who was born in a hospital where babies were supposed to be born, I thought being born in a house made her about 100 years old—but she was probably closer to 80.

My whole family thought of Moe as a farmer because her entire backyard, which was three times the size of ours, was a vegetable and fruit garden, that she weeded and hoed all on her own. No one besides Moe was allowed to get anywhere near that garden but oh, did I want to get near it! She had real stuff in it, not just the Italian stuff like garlic and peppers and basilica that my parents grew. She had grapes, peaches, apricots, corn and best of all—she had strawberries. Tons and tons of strawberries, the fruit my mother would buy and tell us we could only have three each of “to make them last.”

One time I was hanging over the fence while Moe was weeding those delicious red globules and, after offering me one to taste, could see just how much I wanted another one. I so wanted to be able to eat more than just three strawberries at a time and Moe must have figured out right away from the look on my face that she could use those strawberries for bribes.

Was she kidding? Strawberries with sour cream? What was sour cream anyways?

Basically, Moe’s offer to give us bowlfuls of strawberries sounded like strawberry heaven as far as my sister and I were concerned. Besides, it was a way to pass the tedious summer instead of “straightening up the house,” the euphemistic way my mother referred to scrubbing the kitchen floors, doing the laundry and starting dinner.

So we ended up with Moe teaching us how to play canasta while we ate strawberries with sour cream and powdered sugar on them, effectively becoming the only kids I ever heard of who played cards for hours on end inside an old lady’s strange and creepy kitchen, while also learning about her strange and creepy ways.

As soon as Moe took the cards out of the automatic card shuffler she’d casually reach into her mouth with two fingers and with one smooth pull take her teeth out and put them on the table right next to her. Of course, it being such a small table and all, those awful teeth would end up being right next to me!

I had never seen disembodied teeth before and fully expected them to start moving and talking all on their own. I had to squirm and wiggle my arm around so as not to ever brush up against them and would practically put my hands over my eyes to keep myself from even seeing them. When it came time for lunch, Moe would pick up her, by then dried out teeth, open her stringy-with-saliva-mouth, put the teeth back in and, clicking them up and down a few times, tell us it was probably time to “git on home fer lunch.”

Then she’d screech back her chair from the table and grin at us, all smiles and pearly whites.

Every once in a while Moe’s son, Buddy, would play canasta with us.

I hated Buddy. He was a gross, fat man with tattoos all over his arms and one leg. The other leg was cut off when he was in the war—which Moe repeatedly told us—and which he was still upset about—which she also repeatedly told us. I guessed that was supposed to be why a man about the same age as my father didn’t have a job and sat around playing canasta all day long with a sometimes toothless old lady and two little girls instead.

Moe always gave Buddy more strawberries than she gave me and my sister. In fact, sometimes she wouldn’t give us any strawberries at all, and she’d just give them to “Mylittlebuddy,” as she sickeningly called Buddy and he’d slurp up “them strawberries” right in front of us.

That was when I hated Buddy even more. Then, and when he’d take his false leg off and lean it against the table while he scratched and fingered the shiny red stump that came out from under it.

There we’d be, two little girls, an old lady and a war vet, playing canasta with false teeth on top of the table and a false leg leaning against it.

I began to feel like all the strawberries in the world weren’t worth it.

By the end of summer however, my father bought my sister a second-hand bike and she didn’t want to go to Moe’s with me anymore, my mother got a job and hired a babysitter to take care of my baby brother for her, so my staying home didn’t involve “straightening up” like it once had and, with the strawberries being out of season, I was sick of the whole idea of playing canasta with Moe and Mylittlebuddy.

Every now and then, Moe would stick her head over the backyard fence and say something about how we ought to get together again to play cards, but by then I had moved on to crocheting rag rugs—taught to me by the new babysitter.

By the next summer, Moe wasn’t to be seen outside hoeing and weeding. The only person we did see was Mylittlebuddy sitting on the front porch with his fake leg sticking out in front of him and while I never forgot Moe and her fresh strawberries with sour cream and powdered sugar on them, I never did talk to Buddy again and never asked him about Moe.

Down deep inside, I was afraid he would tell me she was dead and the idea of what a dead woman wearing those false teeth would look like was more than I could stand.

Games in the Attic: How a Little Girl Deals with a Broken Heart.