Why I Swore I would Never take Another Bikram Class & Why I started Regularly Practicing it. It was my “dis-ease,” an inability to cope with life, that originally steered me to yoga.

At thirty-five, as a stay-at-home mother and the wife of a workaholic, I was paralysed by depression, anxiety and hopelessness. I considered driving in front of an oncoming bus, but after some soul searching, decided to give yoga a try.

Iyengar yoga, the only style available in Memphis at the time, did little to alleviate my depression. Desperate for relief, I refused to give up. I traveled to Seattle to study privately with Iyengar senior teacher Felicity Green. I learned how to mediate and how to chant. We read tarot cards, built puja fires and practiced asana daily.

Unfortunately my new skills failed to mend my marriage or make me into a supermom but still, I persisted. Intuitively I knew there was more to yoga.

I decided to do a teacher training. A yoga studio in Nashville, just a three-hour drive from Memphis, brought in Rodney Yee. He spiced up an otherwise languorous Iyengar practice with bits and pieces of Vinyasa yoga: lunges and chaturangas were interspersed among the standing poses. The synchronization of breath and movement enlivened the practice. For several years, I migrated between Memphis and Nashville, a yoga pilgrim, seeking a modicum of relief from the darkness that engulfed me.

Determined to never be a divorced parent, I made the most of a dead end marriage. I was ashamed of my inability to cope with life. Simple things like grocery shopping and cooking became increasingly difficult. As I spiraled into alcoholism, my depression and anxiety deepened. A friend recommended AA and I took their advice. The combination of yoga and sobriety, both of which cultivate vulnerability, made me crazier than ever—I cried constantly, I relapsed once and knew I would again if I did not stop practicing.

Suffering, unable to care for my kids, I called my teacher, Felicity: “Please, can I come live with you? Just for a while. I’m angry, depressed and worthless as a mother.” A month later, I left my family and drove my maroon 1986 Toyota Tercel wagon all the way to Seattle. I felt lighter the minute the car left the driveway. I lived and studied with Felicity on and off for the next four years. On my last visit, in March of 1996, she sent me back to Memphis with marching orders, “Go home and teach.” And that was what I did. In 2001, after finally divorcing the man I now call my  “wasband,” I opened Midtown Yoga.

Though I was a successful studio owner, I was neither a skilful employer nor a master of my life. Temper tantrums masked depression and lack of self-confidence. After being sober for ten years, I started drinking again. I fired teachers without explanation. I terminated my relationship with my mother and my sister. I worked seven days a week teaching public classes, workshops, teacher trainings, and private lessons, all the while raising my son, who still lived at home, and adjusting to being a newlywed in a blended family.

As I look back on those years, I wonder how I survived. My new husband and son hated one another and competed for what little time I had to give.

In 15 years of teaching and practicing yoga, I had heard very little about Bikram yoga. Who would want to practice yoga in a steaming hot room with men wearing speedos and girls in two-piece bathing suits? I had been taught that real yoga was designed to heat you from within and that outside heat only aggravated an otherwise harmonious psychophysiology.

But on a cold winter’s day in Vermont, stuck in a chalet with my flu-sick husband, I went to the only yoga class available—Bikram. The teacher, barked instructions, “No water. Look at yourself in the mirror. Do not blink. No one can leave the room. Pull and stretch till it hurts.”

The Bikram series of 26 poses annoyed me so much. I did not understand why savasana, a deep relaxation done lying on your back, separated every pose in the floor series. Backbends preceded and followed forward bends. The heat was oppressive. There were no props (big taboo in conventional yoga), no headstand or shoulder stand and the room was lined with mirrors.

I swore I would never take another Bikram class again.

Yet, here I am 14 years later, going to Bikram yoga almost every day. What changed?

In 2008 I met and started studying with a yoga teacher who told me to do mantra meditation every day. He claimed the mantra, a specific series of Sanskrit words, would remove my depression. I practiced faithfully to no avail. My depression persisted. My faith in yoga was faltering.

Three years later I was diagnosed with breast cancer. After a lumpectomy and 42 days of radiation, I was unable to fully extend my left arm. A year later, my range of motion was so limited I could barely practice yoga. I felt like a failure and a fraud. Convinced that the stress of running a yoga studio contributed to my cancer, I decided to sell. I continued to teach private lessons but ignored my own practice. Acupuncture, massage and cycling helped me regain some strength and flexibility, but I lacked mental stability.

Ever aware of the risk of cancer, I dutifully went for my annual mammogram in 2014. And there it was, another mass—cancerous tumor but this time in my right breast. I survived the surgery and another round of radiation, but my body was left racked with pain. Irradiated chest muscles tightened and hardened causing constant discomfort. Weekly massages only gave me temporary relief. I tried going back to Iyengar yoga, thinking there was less rick of injury, but I was wrong. My back hurt in bridge pose. My neck ached in shoulder stand. My hips screamed in the standing poses and both my shoulders throbbed at the end of class. I wanted to give up.

Then in March of this year, 2015, my husband, who also values physical health and mental well-being, and I decided to try a Memphis Bikram class. I went eighteen days in a row before leaving on a trip to Italy. The day after my return, I resumed the practice and have been going almost daily ever since.

The rigorous discipline of the Bikram series calms me. It is moving meditation. I crave the challenge of the standing series, particularly the balancing poses. While struggling to keep my standing leg straight, I recite yoga sutra 46: “Sthira sukham asanam—practicing yoga with strength and in a relaxed manner gives rise to harmony with the physical body.” And it works.

Lingering discomfort in my breasts, chest and shoulders, the residual effect of cancer surgery and treatment, is completely gone. I am stronger both mentally and physically, and, in general, more content. And alcohol? I learned early on that Bikram Yoga is not compatible with hangovers.

On my most recent 27 mile bike ride, the first in over three months, my legs never tired. My lungs, which were compromised by the radiation treatments, never complained and, even though the temperature was in the upper eighties, I felt comfortable.

Bikram Yoga, what I once thought to be the anti-yoga, has ironically given me just what I always wanted from a practice: stability, strength and flexibility. Now when I go to class, I set my mat down directly in front of the mirrors that I once loathed. I have my trusty water bottle at my side (drinking is permitted after the fourth posture and in between all other poses, just not while students are in postures).

When the teacher comes in and says, “Okay, lights on,” I gladly stand up. The warm, moist air wraps its comforting arms around me and I know I am home. 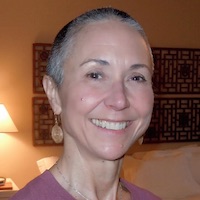