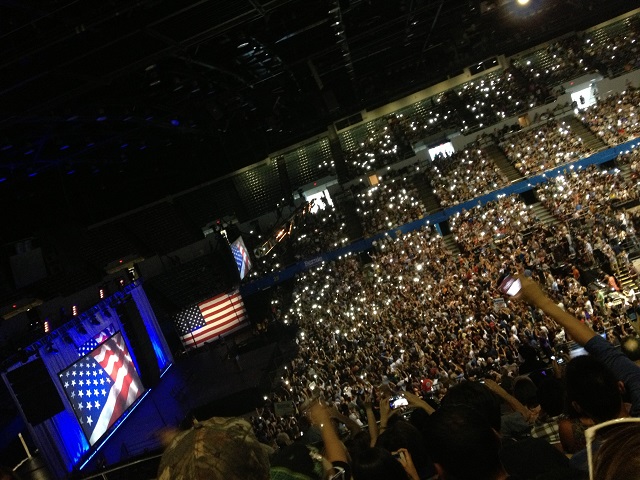 Last night, I had the opportunity to attend the Bernie Sanders Los Angeles Rally. The event was held Monday night, August 10th at the L.A. Sports Arena.

This was a somewhat impromptu event, which is why it was held at the Sports Arena, as other large venues in Los Angeles were not available.

Senator Sanders had not initially planned on visiting L.A. during this tour, so the event was put on with a mere 5 days notice. Nonetheless, 27,500 people turned out on this Monday night, to rally and show their support for Senator Sanders.

My husband and I had just returned home that afternoon, after being out of town all weekend for a friend’s wedding. We were both exhausted, and while it was tempting to to just sink into our couch and relax, we could not bring ourselves to miss the opportunity to hear Bernie speak and to show our support.

So, with our 10-year-old son in tow, we set off toward downtown L.A. and the Exposition Center. It was a little after 5pm when we arrived, and the line was growing quickly. In fact, we did not realize how massive the line was already becoming, until we thought we were nearing the end—but then realized the line turned and continued around the side of the Sports Arena. We walked and walked, and still the line continued—finally doubling back the other way.

We took our place in line, with thousands of others, under the hot California sun. Still people’s energy was positive and upbeat, and we chatted with other Bernie supporers in line as we all waited. The line began to slowly move, as the volunteers started filing people into the venue. The line was literally zig-zagging on the side of the arena, as there were so many folks still arriving and hoping to make it in to see Bernie speak.

When we were finally admitted, the arena was filled with an excited buzz—people waving signs and murmuring with anticipation. The seats in the 16,740-seat arena began to fill quickly as the masses filed in.

At Sanders’ recent rally in Seattle, he had been heckled by women from the BLM organization, but it was later revealed that these woman had acted of their own accord, and the BLM organization did not support the actions of those individuals. In fact, the Black Lives Matter group does support Senator Sanders—and they recognize the fact that Sanders marched for equal rights back in the 60s.

Symone Sanders informed the crowd that there would be a short panel of speakers before Bernie took the stage. She introduced the guest speakers one by one, as they approached the podium.

Included in the panel was a nurse and representative from National Nurses United—an 185,000-person union and the largest group of nurses in the country. This union of nurses has just publicly endorsed Senator Sanders for president in 2016.

Then a surprise guest speaker was brought out to say a few words and to introduce the man of the hour—the surprise speaker was Sarah Silverman! 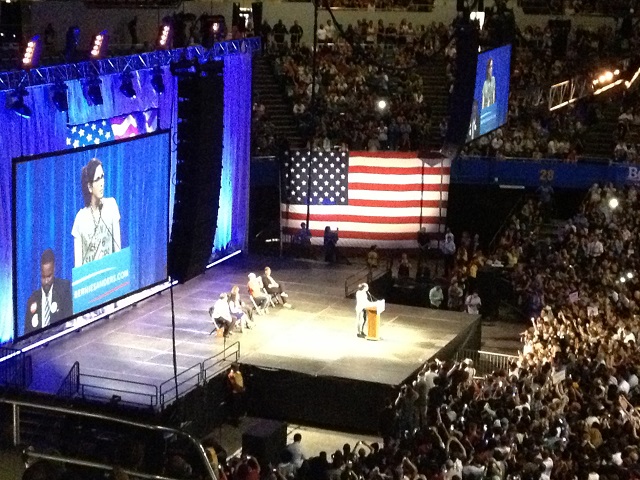 The crowd erupted with enthusiasm when the well-known actress and comedian took the stage. She was funny and jovial as usual, but also serious when she spoke about her support for Bernie Sanders.

Silverman introduced him, saying: “I give you, if we’re all very smart and a little bit lucky, the next president of the United States.”

When Sanders himself took the stage, the applause was thunderous.

The sports arena was completely filled with Angelinos, as well as others from neighboring cities—the overflow outside was nearly the same as the amount of people inside!

Senator Sanders spoke on several key issues, including climate change and immigration issues. He also addressed equality issues, such as equal pay for women, and he urged every man in the audience to stand and show their support for this, alongside the women. He also acknowledged that it’s a woman’s right to make decisions about her own body.

He went on to address what the term “family values” means to him, as the term means something entirely different to his collegues in the Republican party. Bernie feels that working parents should be entitled to paid family leave, for at least 12 weeks, in order to to bond and spend time with new additions to the family. He pointed out that we are the only industrialized country that currently does not have a system for this in place, and that needs to change.

He spoke on unemployment, including youth unemployment—specifically that we should be spending money on education and job creation, rather than incarceration.

He also acknowledged that a young person should not be arrested and thrown into jail for a lowly marijuana offense, while the banksters that crashed our economy (and we, the American tax payers bailed out) remain free to do as they please.

Sanders also iterated that public universities should be free, and that student loans should no longer be offered with ridiculously high interest rates, as compared to interest rates of other loans. For instance, why are students paying a 20 percent interest rate, when we can re-finance our homes for 4-5 percent?

The crowd often hopped to its feet, as he made points—yelling and applauding to show their support for various issues they supported.

The crowds Bernie has been drawing at these rallies have been huge! Yet, the press doesn’t seem to be covering these rallies  much or acknowledging the enormity of the crowds showing up to show their support.

Bernie’s campaign momentum is building and growing stronger—in fact,  the totals for his recent west coast swing reflect that he’s had over 70,000 people show up in just  the last three days!

Check out the totals for each rally to date on this infographic: 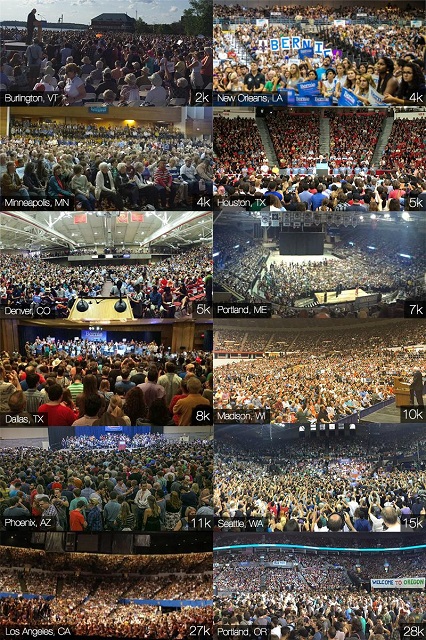 This is hugely inspirational for the Bernie Sanders campaign. Nay-sayers keep saying “there’s no chance he can win,” but it is beginning to look as if they are simply trying to convince themselves!

If the folks showing up for Bernie at these rallies continue to spread the momentum, and show up for Bernie on election day, he’s got a great shot at becoming our next president!