Knowing the Difference Between Fear & Intuition. 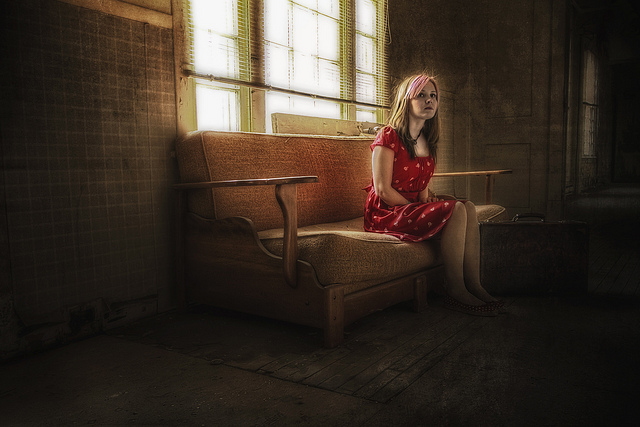 How do we know if it’s our intuition or fear talking?

There’s a lot of “fear talk” around—have you noticed?

Don’t think that or we’ll make it happen!

If something “bad” happens to us, it’s because we’ve made it happen—the Universe is just giving us back what we were thinking!

Lots of that I get. I don’t dispute the Law of Attraction entirely.

So here’s the thing:

Could it be that sometimes we miss the signs that are meant to give us a heads up because we decide that they’re fear thoughts and must be ignored?

Here’s an example of what I mean.

The other evening, a young friend messaged me in a state of panic (I’ll call her Georgie).

She was about to set off travelling for the summer and was worried that her landlord was going to want to keep the deposit she’d been asked to pay when she’d first taken up rental of the flat she was now about to vacate.

He was coming tomorrow morning.

“I just know he’s going to be trouble!” she was saying, and I could hear the trepidation in her voice. “I have a feeling!”

The fear in her voice surprised me—it didn’t sound like the Georgie I was familiar with.

“If I don’t get my deposit back, I’m in big trouble! I need that deposit to put towards my plane fare, and I just know the type of man he is! I’m leaving this flat in way better condition than when I moved in, but I just know he’s going to be difficult!”

When I asked Georgie what made her so certain, she said again she’d had a feeling for about a week now, really powerfully, that this was how it would go.

I tried to help her find some calm, and to think about what she might do if she felt her landlord was being unreasonable. And to begin to explore what options she might have.

But I could hear from the terror and breathlessness in her voice that her legs were turning to jelly and her courage and all logic had deserted her. She kept insisting she couldn’t get rid of the feeling.

So what I want to think about is that feeling—the feeling she’d had for about a week now that was telling Georgie so powerfully that this was what was going to happen.

Because what she thought would happen is precisely what did happen. And so I want to understand just what that feeling was about.

Now, many of us, knowing that this is a vibrational universe, might understand what happened to Georgie to be a straightforward manifestation of Law of Attraction:

• Georgie was terrified and visualising something catastrophic happening;

• Georgie was sending out a strong emotional vibration, her ‘point of attraction,’ and the universe delivered to her exactly what she had been believing would happen;

• The universe simply delivered what Georgie had created.

Georgie belongs to a number of Abraham-Hicks groups on Facebook, and so she was more than ready to convince herself that what happened: the landlord challenging her about the deposit was simply a consequence of her own fearfulness.

She had brought it all on herself! And there were plenty of people on Facebook telling her exactly that! Some of them in a pretty unsympathetic way, even.

It seemed to be a “no brainer.”

But I still want to think about what that feeling was about.

Something doesn’t sit right with me. I’m not prepared to let it be quite as simple as that.

I’m not questioning that this is a vibrational universe; and I have seen too much evidence to support Law of Attraction to dismiss that.

However, I also believe that the universe is benign, that we are never really getting it “wrong” – because that is impossible. We are surrounded at all times by far more love and help and support and guidance than any of us can begin to imagine even in our wildest dreams.

And so I believe that the universe is constantly sending us signs.

So I want to suggest a different possibility. A complementary suggestion.

What if the feeling Georgie initially had wasn’t her fear talking at all?

It’s so easy to think that. But I know Georgie pretty well, and she’s normally pretty level headed.

So what if, instead, it was the universe giving her a sign? A heads-up, if you will?

Maybe the sign was saying “be prepared for this and do your research so you’ve got your Plan B and Plan C ready.”

Incidentally, once Georgie got past her fear and engaged with the situation she found herself in, she researched her rights, took her landlord on and left with her full deposit.

But had she listened to her intuition, her sign form the universe, maybe she needn’t have suffered all the angst that she’d quite needlessly gone through.

And she would have gone and done that same thing straight away, with a grin on her face and a lightness in her step, knowing that she’d just received yet another loving communication from a Universe that constantly has her back!

See, I reckon this happens all the time. We’re gripped by a sudden rush of something, an absolute knowing.

It’s not a fear feeling, it’s a knowing.

If we miss it the first time, the universe tells us again—we hear something on the radio, overhear a conversation, see a programme on TV, keep seeing a scene replay in our dreams or imagination…

And invariably, it is right. What we have kept thinking is exactly what happens.

So my question is this:

Are such feelings always our fear talking (the Law of Attraction), or might we be receiving a message from the universe that is a part of our intuition?

If we are all part of an ever-expanding ocean of intelligent energy, which holds all that is, the wisdom of all that has been, and the awareness of all the potential realities which can yet be;

…and if all of us have the capacity to tune in to what is held in that ocean, to feel the waves of knowing and intuition wash over us or flow through us;

…and if we believe that this intelligent energy is compassionate and benign and loving—as I do— and that it always supports, guides, speaks directly to us and lovingly accompanies us on our chosen path;

…then how would it not be that our intuition is the universe speaking our name?

And how would it not be that if the universe speaks to us directly and personally, in so many ordinary everyday signs (if we are open to them), and it knows our name, that it would not also be in constant communication with us in this way?

We all have endless examples of that, I think. We just maybe understand them differently.

All of us will say, “I just knew that was going to happen!” That is, we all experience that feeling I’ve been talking about.

However, what we do with that feeling seems to me to be crucial.

Because it depends on how open we are to the idea that:

Wouldn’t life feel a whole lot easier if we were to allow that possibility?

And wouldn’t that be just yet one more piece of evidence of how amazingly loved and cherished we all are, every single step of the way?

And don’t you just have to love that?

Cultivating a Relationship with Your Intuition.