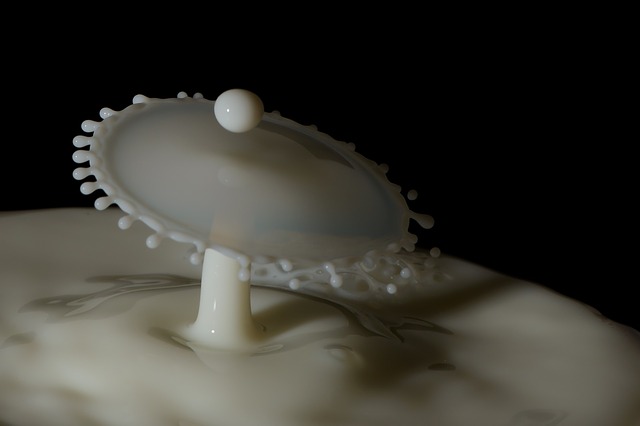 Where we live, I hear milk is exported, but I haven’t seen a cow in over six years.

We have no grass, no fields of cattle grazing, the cattle here must live therefore in sheds (or underground).

The milk they make here is from GMO-corn fed cows, who are given routine antibiotics. I used to drink the stuff; it immediately made me feel like I had mucus in the back of my throat and in my nose, like I had a cold.

In the last year, I have tried several different types of “milks.” I drink any vegan milk myself, but my son likes the ones closest to dairy in taste and texture.

After a round of antibiotics when he was seven months old, my son’s gut seemed to be very sensitive to milk. I gave him plenty of probiotics, but even goat’s milk upset his tummy.

The pediatrician told me he is intolerant, that it would get better with age, but to avoid it where possible. Fresh local milk seemed the worst for him, but even goat’s milk from the UK upset him. His nappies were not nice, and later I would be called into school on regular occasion to change his trousers, as the school was giving him the local cow’s milk.

A large proportion of individuals do not tolerate dairy well, 85 percent of Maltese population, I was told. It depends a lot on where you are from, and how heavily processed that milk is.

I have tried many alternatives, and these are my five top favourites. Each have their different qualities and costs.

I used to make my own almond milk; it is easy, but I found it hard to keep it fresh and on hand, so I do stock up on the carton variety for ease. Freeing up time to make other delicious things.

Homemade is always better, in terms of nutrition, especially if the nuts are soaked.  But also, I had very limited success with making milk other than almond at home, which gets a bit boring for him.

I can’t make everything from scratch, not if I ever want to leave the house, so, because of the options below, this seemed like a corner I could cut.

Hemp milk. This is my son’s favourite and the only one he drinks at school at the moment. It is white, like cow’s milk, this is a big advantage for him, as well as it being slightly sweet. Personally it is a bit too sweet and creamy, I prefer a more nutty or flavoursome milk. But he loves it. Works well in hot drinks, does not curdle.

Almond milk. This is a common favourite cow milk replacement. Quite a likeable, easy taste, readily available when the more obscure milks are not, and easy to make at home. If doing so however, try to get raw almonds. (I try to avoid ones from California as they are pasteurized before leaving the U.S., hopefully it is possible to find unpasteurized ones in the states however.)

Buckwheat milk. I love this. I went away for three weeks and left some in the fridge, and when I got home and expected it to be yucky, it still smelled and tasted fine. I drank it with no problems, but didn’t give it to the kids. I use this one for hot chocolate as it somehow makes it tastes deliciously marshmallow-ey.

Kamut milk. My friend just cut dairy out of her girls’ diet to try and reduce the youngest’s eczema.  They said they loved the taste and drink this milk straight. It was the only one they liked as it is surprisingly palatable and mild-flavoured. I like using this one for porridge but I don’t find it for sale everywhere. Some brands are pretty sweet, so try to find variations that are unsweetened. (This goes for all the milks.)

Quinoa milk. Probably my personal favourite, but definitely not my kids’. It has an earthy, quinoa-ey taste to it, and has less sweetness than the first three in the list. I wouldn’t necessarily like to drink a straight glass of it (for that matter, not any of the other four either) but mixed with other things, like on a cereal, I like it. I don’t like a milk that overpowers the taste of the other food, however, this is not a good one for hot drinks. It is the most expensive of the five in the shops I have found.

We have also tried rice, soy, coconut and oat milk, as well as others at home, but these are the most “successful” all-timers.

Milks I have tried to make at home (by blending ingredients and straining through a nut milk bag/cheesecloth) include: carob & brazil nut, pumpkin seed milk: (good for hair and nails but slightly green, kids may love this—call it witches’ milk), macadamia nut (expensive nuts where I live), sunflower seed, walnut, cashew nut and almond.

Simply blend a cup of seeds or nuts with enough water, pinch of salt, a teaspoon of vanilla essence and about one or two pitted medjool dates, then strain through a nut milk bag after good blending.

Twist and squeeze until a dry pulp remains in the cloth. Blend carob in after this, for brazil/carob milk. (Salt is important to make it taste like cow’s milk, as cows are given salt blocks to lick, to make them drink more and thus produce more milk.)

I like to keep the remains, or the pulp, make it into biscuit shapes, squidge in some raisins and leave them on trays, covered with cheesecloth to prevent flies, outside in the hot sun to dehydrate. You could do this in a dehydrator or oven on 37 C (to keep the raw nutrients intact). The resulting biscuits are not the moistest or sweetest but they suit me. You could experiment with adding honey or other ingredients to make them tastier, but beware of the flies. Another option is to add savoury herbs and dry them in the oven on a low heat.

Whether shop bought or homemade, enjoying antibiotic, hormone, lactose and cruelty-free milk makes me wonder what we saw in commercial cow’s milk in the first place!

The Truth about Milk. {Warning: You may Never Drink Milk Again}