Chrissie Hynde & the Rape Myth that Won’t Go Away. 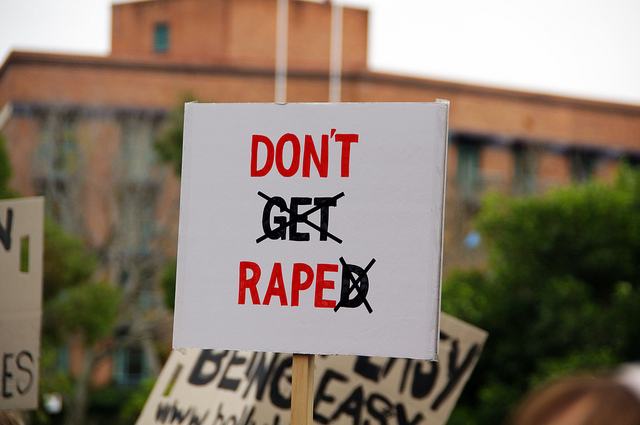 Every other week—or so it seems lately—there’s a celebrity, politician or other public figure making a comment about rape that makes the world pause and ask,

“Did they really say that?”

Recently, Mike Huckabee said that the decision to force an 11-year-old Paraguayan rape victim to bear her rapist’s child was the right thing to do.

Over the weekend, social media was abuzz with comments by another well-known public figure saying that in some cases, rape victims “have to take responsibility” and not “entice” a rapist by some of their clothing choices.

The source of the latter comments was a bit more unexpected since they came from none other than the well-known singer and feminist Chrissie Hynde.

Hynde, who made in the comments in an interview with the UK’s Sunday Times, is promoting a new autobiography where, amongst other things, she reveals that she was the victim of a brutal attack in her 20s. A gang of bikers told her they were taking her to a party but instead took her to an abandoned building where she was forced to perform sexual acts under the threat of violence.

Even hearing the summary of what happened to Hyde was enough to fill me with horror but her comments about how  “this was all [her] doing” and that “[she] takes full responsibility for what happened” were even more saddening.

It’s hard to believe that in 2015 a woman like Hynde, whom many view as a feminist icon, could still believe the myth that rape occurs because men cannot control their libido or that somehow, some victims are fully or partially responsible for being raped.

Like a cockroach, this myth stubbornly refuses to die.

A quick look at some of the comments left on various messages boards in response to Hynde’s comments confirmed that she was not alone in her views. “At last, someone with common sense!” is a message that I saw over and over again. Others compared what Hynde did with someone who left their car unlocked with the keys in the ignition. Sure, what happened was a crime but come on, what did you expect?

Clearly, these people are missing the point.

As someone who was sexually assaulted at the age of 12 and who over the years participated in various rape survivor support groups with other survivors who included men, women who had been drugged, incest survivors, women who had been raped in their 50s and beyond, I can tell you that there was one common thread running through all our experiences:

We live in a society where children as young as infants and senior citizens are raped. Men are also raped especially in places in prisons and contrary to popular myth, it doesn’t have to do with pent-up sexual tension.

In fact, years ago, I watched a documentary about one of South Africa’s most notorious prisons from back in the days of apartheid. Male rape was rampant in this particular place, and a former inmate who admitted to being a rapist said he did it mainly to control and humiliate the other inmates and secure his place as one of the alphas there.

When asked, he said that he was straight, and the pleasure he got from the act was from the absolute control he had over the victim.

In fact, the views he expressed are one of the reasons why the rape of men, women and children is a very common war crime. No one in their right mind would ever suggest that in these cases, the rape is the result of what the victims wore or unbridled lust on the part of the rapists .

However, the ignorance lives on.

Namely, why on earth would anything think it’s okay to rape someone-period?

In Hyde’s case, the fact that these men took the time to cook up a scenario to lure and trick a woman to come with them for the purpose of raping her suggests psychopathic behavior.

While I don’t know Hynde nor claim in any way to be a therapist, her comments suggest to me that she may still be suffering  from her ordeal nearly 40 years after it happened and has not fully healed from the trauma of it.

As The Guardian’s Rhiannon Lucy Cosslett points out, “

Just because Hynde was sexually assaulted doesn’t mean she is an expert on what causes it and on how to tackle it.”

And while Hynde’s comments are gaining a lot of backlash—as well they should—it is important to keep in mind that she is still a survivor of a brutal rape and deserves sympathy and support for that.

I know what it is like to internalize the pain and shame of an attack and end up blaming myself for something that wasn’t actually my fault.

I hope some day Hynde can see that neither she nor any other rape survivor never needs to take “full” or any responsibility for what happened to them.

It’s not only unnecessary, but totally inapplicable.

No One Asked my Rapist what he was Wearing. {Adult}