On My Shore: Reflections on Aylan’s Photo. 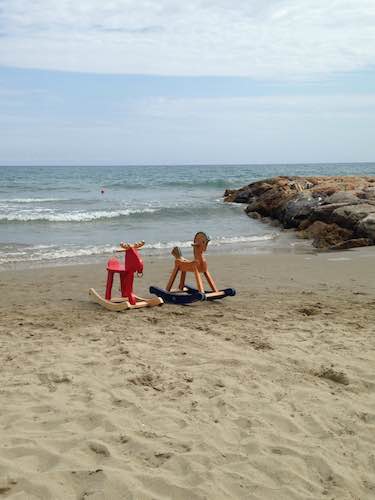 Yesterday, I took this photo while I was at the beach with my mum.

I thought it looked endearing, the two wooden horses on the shore.

A boy and a girl in colourful swimsuits running around, laughing excitedly for these last days of freedom before school starts.

I had not yet seen the photo of another beach, the one which has shaken the whole world. The one that jumped at me later in the afternoon from the front page of the newspaper at our favourite gelateria.

Looking at it now, it strikes me for the contrast—children games and laughter on one shore, dead children on another. Two beaches of the same sea.

We can argue endlessly about the causes of the war in Syria. We can debate for days about what we should call the people crossing the Mediterranean.

However, it’s just chance that determines our place of birth.

Perhaps this is one of the reasons why Europe and the Western world are so uncomfortable talking about this migrant crisis and everyone climbs on their own special ideological barricade. The idea that it is all linked to chance, that the only thing separating us from them is just impertinent luck, may be too much for us to accept.

That and the (ir)responsibility of the European and U.S. governments in dealing with the Syrian and Libyan crisis. Hence, barricades of justifications, explanations and downright racism are erected to protect the consciences of Europe from the hard reality that the Mediterranean and its shores are becoming a mass grave under our eyes.

I cannot and will not accept that children can drown at less than 20 miles from the coast of Greece and we will remain indifferent.

Rationally, I know he is not the first and only child who has died this year. Only a week ago the MSF  (Médecins Sans Frontières) rescue ship, the Phoenix, stumbled upon a boat carrying over 450 people. Fifty-two of them were dead because of the toxic fumes exhaling below deck.

I am sure this would make a harrowing photo too.

Yesterday, they rescued over 1,000 people. The numbers are there to be read, but photos like Aylan’s dead body are the ones that get to the heart of people. The ones that shake us from the comfort of everyday life and make us realise our luck.

An Italian journalist compared this photo to the one of the little Vietnamese girl disfigured by Napalm or of the young boy in the Warsaw ghetto, this latest comparison sparking some outrage.

The Syrian war is not the Holocaust.

But during the Second World War, the free European countries and the U.S. closed their borders to boats filled with Jewish children whose parents had spent all they had to try and save them from the persecutions awaiting them in Europe.

I’m sure I’m not the only one seeing the similarity to a time in which Europe (and the U.S.) opted for a policy of appeasement, rather than protection of human rights.

That, and the indifference towards our fellow humans. I have read many articles and posts on social media trying to define these migrants—refugees, economic migrants, illegal immigrants.

Here, in Italy, it feels there is a striking urgency to have a precise label for these people.

I actually have one—they are men, women, children—human beings.

It doesn’t matter whether they are coming to us to escape war or to find better economic conditions. They are risking and losing their lives at sea, a handful of miles from our coasts and then living in inhuman conditions in our countries.

This is the problem, this and the original causes of this exodus, such as the Syrian conflicts, the presence of ISIS and other Islamic militia in Africa and the Middle East, the non-existence of a Libyan government.

The governments say that they cannot register all these people coming, that they don’t know where to house them.

And my reply is—launch a volunteer program.

Enroll the young people from the country, people with big dreams and young hearts who still dare to hope, laugh and love. People my age who are not afraid of this wave of migrants.

Put us to work—we can build a centre, we can enroll them.

We can fill in a form, the functionaries only have to deal with the bureaucracy.

Use the unspecialised brains of students to carry out simple tasks, such as cleaning and cooking. Don’t be like some of the NGOs who only want skilled help.

They tell us we are a generation without ideals or morals, and we may well but—but some of us want to do good.

Don’t tell us to wait until we have a degree.

We still have hope in our eyes and capable hands—let us be of help.

“I’m sure this poor little boy brought only joy. Look at how the world repaid him.” {Warning: distressing image}

Photo: Courtesy of the Author. 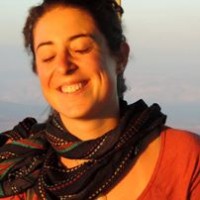