Stand Up Paddle Boarding, My Sisters & Me. ~ Anne Samit 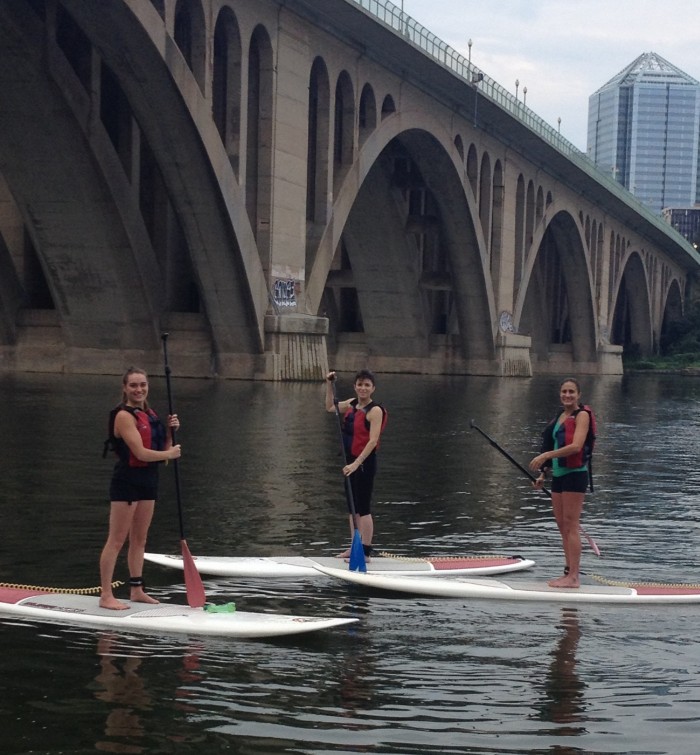 For me, it’s the ordinary that’s extraordinary. I find it calming. With a good bit of anxiety behind me, the ordinary provides precious equanimity. That’s why I adore my regular schedule, because it’s so easy to flow when I know where to go.

I have one yoga instructor who requests that at the end of each practice we show gratitude for what most might say is ordinary. After a rigorous practice, she asks us to put our hands in prayer and be thankful for the ability to move on the mat and even for the clarity of our minds.

So several times a week, I put my hands on my heart and recognize the extraordinary in the ordinary.

It just so happened that on this ordinary day I received a group text from a fellow yogi. She wanted to know if we’d like to go down to the river early the next morning for Stand-Up Paddle Boarding (SUP).

For the others on the text, SUP was not extraordinary. For them it was an ordinary way to start any day.

I hesitated. My weekend was pretty much mapped out with plans for yoga practices, dinner and more. Plus, I’d never done anything like SUP before! But, oh, how I’d always wanted to try, and time was almost up. Summer’s end was near.

I consider these friends my yogi sisters. They know me from the mat. They think I’m brave! But they sensed my hesitation in that moment.

They wrote, You’ll be fine, Anne!

That night, I arrived home from a late dinner and laid out everything for the next day. An outfit for the paddle board and my mat and towel for a practice to follow. Another outfit, in case I went overboard, and another towel for that too. I added to the pile some cash, a credit card and my license.

When I finally went to sleep, it was only for a few hours. I awoke in the middle of the night to a tumultuous current of hesitation.

Maybe I was a little nervous? Maybe I ate too late? Maybe I should cancel?

I turned on the light to turn off my mind and got up to fold some laundry—a trusty therapeutic endeavor no matter what time of day. I rolled up my mat and spotted my missing sports bra! Folding laundry and some tea seemed to settle me, so I climbed back in bed and closed my eyes as my mind calmed for the rest of the night.

When the morning came, I gave myself no time to think. I popped up and grabbed some coffee and put my things in the car. My saying yes to this outing was so emphatic that I arrived 20 minutes early!

It was a beautiful morning and the river was calm. I put my bag over my shoulder and walked to the boathouse. Lots of people were strolling around and some were even riding bikes. I sat down at a picnic table to wait for my friends. A message from the universe blasted through the outdoor speakers with the lyrics of a song, Say yes, say yes, say yes!

I looked up to see my friends arrive, one on a bike and the other on foot, their experience apparent in how lightly they traveled.

We stuffed my belongings in a locker, put on life jackets and walked down to the pier. A young man served up the boards, and my friends hopped on, paddling away on their knees before standing up.

I told this young man that I’d not done this before, and he showed me how to tie the leash to my ankle. I hopped on my board, balancing on my knees, and he told me which way my paddle should face. I awaited more instructions, but apparently that was all he had to give. So I paddled out to meet the others who had made their way under a bridge.

“That spot is your center of gravity, Anne,” said one friend.

She pointed to the center of my board, and I stood up!

“Keep your arms straight when you paddle,” said the other. “And now use more of your core.”

I was thrilled to be upright and still dry, and I happily paddled in circles under the bridge.

“There’s an island up there, one said. We could go that way!”

Wait! We were going somewhere?

I looked up the river and saw three rocky islands, The Three Sisters.

There is an extraordinary tale of three Native American sisters who crossed the river late one night, leaving their tribe on one side, for another on the other. But they never made it over. Halfway there, they drowned, and legend has it that their spirits emerged from the water as three barren, rocky islands.

That’s where my friends wanted to go! It’s the deepest part of the river, and most locals know about the tumultuous currents hidden below the deceptively peaceful surface of the water.

But none of that was on my mind this morning.

We paddled up the river, our oars slicing the smooth surface of the water on either side of our boards. We flowed along with ease, chatting amiably and gliding quietly. Sometimes, one of us moved forward; other times, another fell back. We traveled with a comfortable camaraderie formed from so much shared time on our yoga mats.

I felt buoyant on my board, and I recognized this feeling. It was the same as the one I have when I’m lifted in my practice.

When I practice, my spirit emerges like those of the sisters from the water. On my mat, I am adventurous and daring and ready and able. And that’s the person who formed these friendships. That’s the person who was paddling this morning, as if it were nothing out of the ordinary.

I was starting this day as part of three sisters connected by something born on my yoga mat. It was that collective energy created by the practice that lifts us up, ties us together and accompanies us wherever we go.

It’s what enables us to float, so of course we brought it with us to the water. We carried it without any effort at all. And it helped us flow safely up the river and back, the same as it does for us on our mats.