What I Did to a Married Man after Yoga. 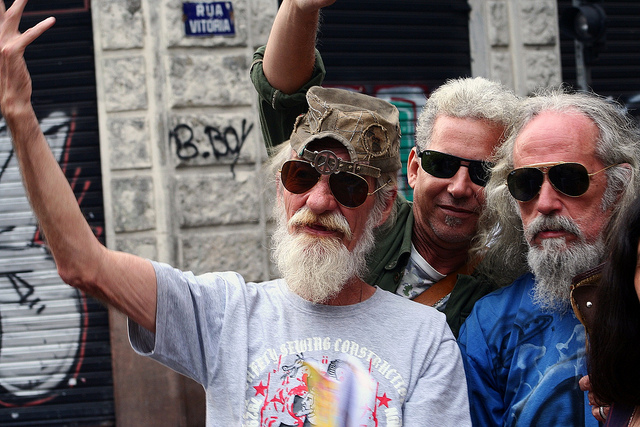 While waiting in line the other day for my usual order of a half-caff, triple size, whey and gluten free, grass-fed, third-party latte at my local coffee shop in my neck of the woods near San Francisco, a tall white dude with a long pony tail approached me.

He looked like he might have belonged to a band like The Eagles or Foreigner back in the day, as he flipped his wispy grayish blond hair, and his blue, crinkled, windsurfed, California eyes peered at me in a sideways manner.

He said his name was Burt Reynolds in a totally relaxed fashion, which was really weird because he pretended that he did not have the same name as one of the most famous actors during the 1970s.

“I hope you don’t mind me saying this,” he whispered into my sweaty post-Yoga neck. “But I must say that you are one exceptionally gorgeous female.” I suppose he meant one as opposed to two. Too bad my girlfriend wasn’t with me.

“Oh thank you,” I replied, as I still had my Yoga buzz on, and felt like I had smoked a funny cigarette or two. Usually I pretend not to hear men talk to me in coffee lines after workouts, as they mess with my chi chis and my mantra-vibes.

He tried to touch a Hawaiian-stylized flower on my workout pants with his leathery hands, but he didn’t succeed as I lifted my leg away just in time, in an nearly obscene fashion.

With a weird high tone in his voice, kind of like Barry Gibb from The Bee Gees, whom by the way, I used to crush on as a teenager, he unabashedly told me that he was married with children in tow. There was a very long line at this particular coffee shop, as you may have gathered by now.

I ignored him and pretended to be checking out the so-called hand-made $80 recyclable coffee mugs near my head. The sign said that all proceeds would apparently go to starving children in other countries. But I did not believe it, because the cups looked exactly like ones I just bought from IKEA and the prices were written with red sharpie pens covering scratched- off labels.

Also, the chick selling them looked strangely like my neighbor who has been short on rent, and a little too high on life.

Any way, this dude proceeded in his odd fog of narcissistic self-exploration to tell me that his wife and kids were, in his words “a drag,” and what he really needed was a young “thing” like me to take his mind off his troubles for a weekend or two.

I turned around and looked up at this gnarly specimen of a being and said, “Oh, that’s sound great. Where will your wife, kids and the two of us be spending time together? Perhaps Palm Springs would be a good choice right now as I have a Time Share coming up.”

That was a lie. I have no Time Share, and I have never been to Palm Springs.

He then replied, “Hey girl, what I said is that I wasn’t into trouble.”

Like a bit player from a 1940s B movie, I answered, “Well Mister, my name happens to be Mrs. Trouble.”

I then told him another really weird and outright lie. I don’t know whether it was because the sun salutations and reverse warrior positions that morning had made me into some kind of insane Superhero vixen, or because I was simply trying to torture him in the name of his wife, and former wives like me who had been cheated on by terrible men.

Without skipping a beat or an upward dog, I whipped my long brown half-Asian hair into his face and told him that I was actually a lesbian.

The reason that “lesbian” came out of my mouth so quickly is because recently I have had the great opportunity to meet quite a few lesbians, for the first time in my life, and I am really enjoying our friendships. I even considered joining the other team once when I was dancing along with a female cashier to the song, “Our Lips are Sealed,” by The Go-Go’s, but I think that period has ended…

Not surprisingly, he looked really turned on. I forgot about the most popular fantasy that men have about being with two women at one time. So, I added, “Yeah, and her name is Chuck and she’s a biker cop.”

I don’t have any idea where that came from because I don’t personally know any cops who are lesbians, especially named Chuck who ride bikes, although I was proud that such entertaining information and material came so easily to me.

Without skipping a creepy beat, he said, “A cop, hah?” as he murmured with his heart beating California-style through his faded vintage Hawaiian shirt with his reading glasses dangling somewhere in the middle of his grey chest hair.

“Wow man, maybe you and Chuck could meet me one weekend. I have a cabin up near Mount Shasta and a private driver could pick you healthy gals up. I have it loaded with Champagne and even a few outfits in the back you could try on.”

This dude would clearly not stop. I was just about to turn away for good and ignore the weirdo on this late summer morning, but the feisty female in me could just not stop, any more than he could not.

I looked  him straight up and down, in all of his ugliness and stereotypical wonder, and I added that what my girlfriend Chuck does on the side, when she’s not busy arresting people because they look at her “funny,” is bust cheating husbands for a private detective firm.

“She also kicks ass and is the bodyguard of a Florida rap artist,” I quickly added.

Burt finally looked at me and held his hands up as if I were about to arrest him, and he said, “That’s just too much man. I hope you women are good for each other. I suppose you lesbians is why men like me have such a problem getting laid.”

Right at that very moment, one of my female friends of the opposite sexual persuasion came up to me. It was like I had paid her or something. It was all too perfect.

She is tall, sexy, blonde woman with the energy of a dragon and a hummingbird combined. On top of that, she is also spiritual and kick boxes as a way to relax and unwind. She hugged and kissed me right in front of Mr. Reynolds and asked me out for Chinese food and a drink.

“Sure Chuck,” I greeted her back as I gave her a big wink!

She simply winked back.

What I would pay to have a picture of the look on his face as we walked off into the morning sun together, sipping and sharing my hippie veggie latte, as the summer wind blew our long hair towards the west, like some chick flick-version of a Clint Eastwood movie.

By the way, if anyone knows where Chuck is, you know where to find me.

A Warning to the Men who Catcall: I am Not your Baby.