What Mega Churches are Missing. 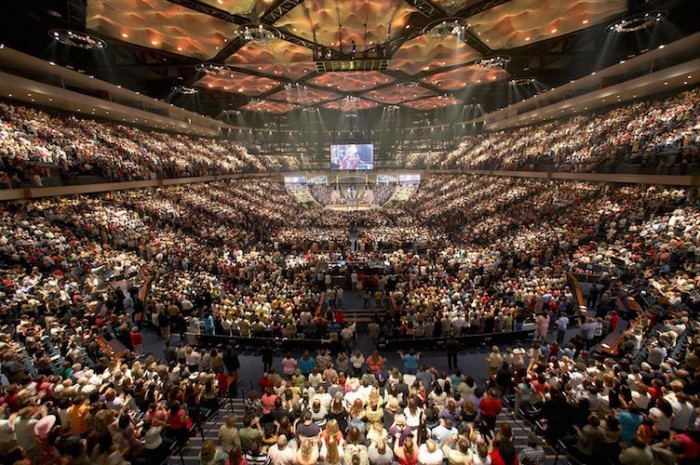 Every day on my drive to work I listen to music, and I drink my coffee, and about half way there I’m reminded of a specific story about Jesus.

In one version of the story I believe he goes after people with a whip. In the others, he flips over their tables and tells them that what they are doing is not making God happy. If they were just there for money, power, and material stuff they could do that somewhere else and not in the temple, because God was not impressed with those things.

I also recall that Jesus went from town to town preaching. But, he didn’t go visit the temples and preach. He just talked to folks wherever he went. He would just stop in town or on the side of the road and teach people according to what was happening in the moment.

He didn’t preach in the temple to make himself look important.  He didn’t have to.  People knew that he was different because of the way he lived.

We know that Christian Churches—a term I use very loosely since that means different things to different people—are supposed to follow the teachings of Jesus. It seems to me that Jesus was not a big fan of the pomp and circumstance of the big temples. Jesus was all about people. He was about loving each other, and taking care of the poor, and believing in miracles the way little children do.

So, from the stories about Jesus in the temple, and the examples of him teaching on the road side…I’m going to go out on a limb and guess that he would not be really excited about having a giant building/arena erected in his honor.

This brings me to the very important question: Whose idea was it to build mega churches?

I live in an affluent area in middle Tennessee. On my way to work every day, I have to drive past a huge construction site.  I’ve watched them take out countless trees and bulldoze all of the vegetation into oblivion. That hurt my heart. Then the sign went up—one of the local churches is building a new home.

I felt like Jesus in the temple. I wanted to go flip their tables over and ask them what they were doing. I don’t even identify myself as Christian, and I am upset.

I went to the internet and found some information on the church’s website about the construction of their new building.  It will sit on 107 acres of land. The building itself is over 78,000 square feet. The price tag on this new building, according to their website, is approximately twenty-two million dollars. Yes, that’s $22,000,000.00. I cannot wrap my head around it.

This is offensive to me on so many levels, but there is one major issue that it brings up for me. If you were to walk less than two miles down the road, you would find a very nice young man who sleeps in his car behind the Starbucks. There are hundreds more like him all over the city. Right here in one of the wealthiest cities in the country, there are hungry kids. Kids who rely on free meals at school as their only nutrition. Just a couple hours down the road there are people in Appalachia with no running water or electricity. How can this group of people, who are supposed to love Jesus, justify spending over $22 million on this church building? I don’t get it.

I went to another website, for the Nashville Rescue Mission. This one is another Christian organization in my area. This one, however, is not a church. It is a homeless shelter that offers hot meals for the hungry, education and training for people who need help finding jobs, and rehabilitation type services to help people get back on their feet.

This is just one of the great questions in my world. But, seriously, wouldn’t it be more valuable to help people in need than it would be to build this ridiculous, giant building? It seems so wasteful. It seems so misguided. It seems so…so like something that would actually piss Jesus off rather than make him happy or honor him.

I don’t believe in giant, multi-million dollar church buildings. I do believe in loving one another, feeding the poor, caring for the sick, and helping others in need. I’m not a Christian and I don’t have to be one to see that what Jesus stood for doesn’t have anything to do with what that church and others like it are doing. That’s not about God at all.