What To Do When Our Sex Life Gets Boring. 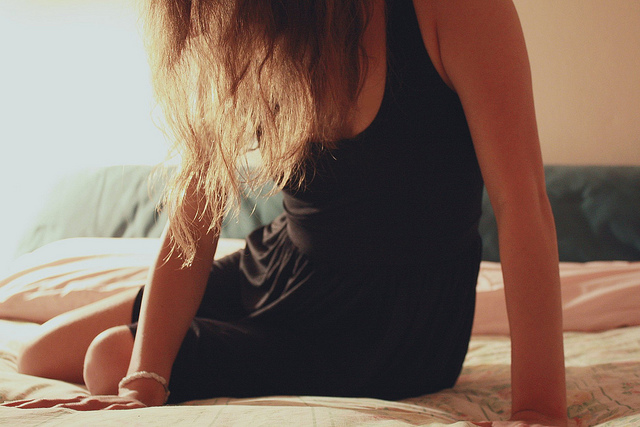 I had never been in love with a man who touched me the way I wanted to be touched.

No, that was a skill that only the “bad ones” seemed to possess, at least until I picked their locks and made my way into their hearts—then, mysteriously, their allure would vanish. That’s because it had always been the unattainable, unreachable men who inspired my lust. I only longed for the ones I didn’t feel at home with and somehow I always ended up begging for their touch.

But with the guys I truly cared for, I wasn’t begging. I was more often irritated and frustrated that something was missing—in the comfort and familiarity betweens us, there was no fuel to stoke fire.

When the feeling of longing for someone’s touch is missing from a relationship, it’s easy to blame it on the way they touch us. Unless we look deeper, it’s easy to assume the problem is with their lack of skill or our lack of chemistry together. But the truth for me was that what I was longing for, they couldn’t give me.

When I say this, I do not mean that they couldn’t provide this feeling because they were deficient. No, it was a feeling I needed to provide for myself.

This is where many relationships start to drift apart.

When we get bored, we begin to consider all the other options. Some spend their entire lives blaming their partner for what’s missing and many jump from relationship to relationship chasing the excitement and variety they find in new lovers.

I did this for many years. I came to believe that I could never be fulfilled by just one man so I never let myself get attached. I tried being in open relationships, too, but after years of being with whomever I wanted, I realized that a variety of lovers wasn’t fulfilling either.

What I was truly searching for were the versions of me that came out with all those different men. I realized that the thing I was chasing was always me.

I was looking for people that brought out different sides of me because I did not always know how to bring out those parts myself. I was always disappointed because each man brought out only some parts but no one brought out all of me.

When I realized I was reliant on others in order to feel the way I wanted to feel, I saw that no single lover would ever be enough for me until I changed. I realized that my arousal was more up to me than it was up to anyone else. If I was turned off, nothing he did felt right. But if I was already turned on, he could do no wrong.

I began taking responsibility for how I felt and how I expressed myself and the boredom stopped.

Fast forward a few years and I’m a coach working with people who want to be more connected, more vulnerable and more courageous in their lives and relationships.

Considering my current profession, I’m grateful for my past. I love that my own life and relationships used to be so unconscious because the dramatic change I went through instilled a deep knowing in me that big change is possible for anyone. Almost everyone I talk to doubts they can change, but that’s because they live inside their own stories and don’t know any other way.

I don’t believe their stories. It’s not because I think they’re stupid, it’s because I know they’re part of a self-fulfilling cycle that goes like this: Experiences lead to beliefs. Those beliefs create more similar experiences. Those experiences reinforce the beliefs.

If we believe someone is incapable of touching us the way we want to be touched, there’s a good chance we came into the relationship already believing  that we wouldn’t like how they touched us after we got comfortable. If the experience seems familiar, it’s a good indication that our belief formed our experience and not the other way around.

In my case, I had developed a belief that as soon as the honeymoon phase was over, I wouldn’t enjoy the sex anymore. My belief was reinforced many times and it became self-fulfilling.

To use an example from my coaching practice, a lot of clients, exasperated and ready to give up on the sex life with their partner, ask me something like, “How can two people work on this? Isn’t the way that someone touches another person inherent and intuitive?”

This question shows us something about the beliefs that contribute to this challenge for couples:

Third, it assumes that the way we touch each other is always a representation of our pure intuitive touch. It assumes that’s just how we touch.

Fourth, it assumes that the way we feel about their touch is our of our control.

For example, we could  believe that the way their touch feels to us has more to do with our state of mind than anything else. We could also believe that the way our partner touches us is neither inherent nor intuitive and that they may have actually learned to touch us insensitively. After all, if the way someone touched another person were inherent and intuitive, we’d all be excellent at it, wouldn’t we?

But we learn sex from unrealistic examples and we are not trained to touch each other based on intuition alone. We are often trying to have our sex look the way we have learned is hot or acceptable, and that agenda gets in the way of being present, which blocks our ability to be intuitive.

So what experiences might change these beliefs? There are unlimited options.

I’d start with presence. When we don’t like the way someone we love is touching us it’s usually because either or both of us are not all the way present to the sensations in our body, to each other’s response, and to our true desire. In a way, we’re switched off.

Whenever we are in the presence of someone who is deeply present, it’s difficult to be switched off. Their presence demands our presence. The same is true in sex.

Sometimes, the most effective way to work on the sex in our relationships is simply to be present enough to lovingly and patiently reconnect when we can feel either one of us has checked out. It’s great if we can both agree to do this, but deep presence from even one of us can make a big difference.

And once we’ve experienced this, we can turn our attention to what part of us really wants to come out. Beneath the fear, the conditioning and the expectations, what is the truest expression of us in that moment? Can we bring it out?

How can we turn ourselves on? Because when we’re turned on, our partner can do no wrong and nothing is boring.

One Simple Trick to Achieve Mind Blowing Sex every Time.