Why we Hurt Each Other. 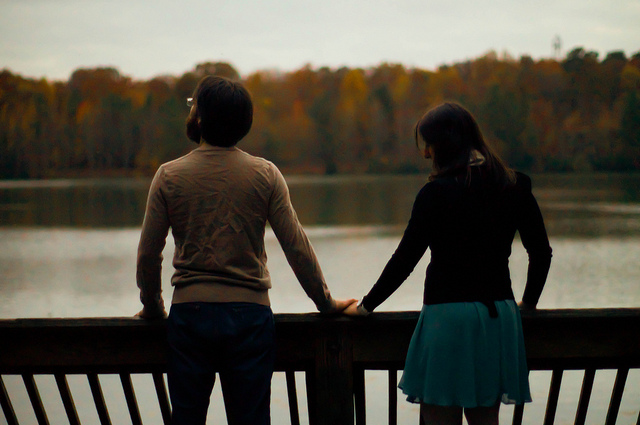 I see her as she is.

She is beautiful, smart, and sexy as hell. I love the way her eyes glow in the light, how her mouth curves as she smiles. I love the words she chooses, the innocent and not-so-innocent innuendo she chooses to express her emotion, and the way her mind has my own dancing around a fire of passion.

She is my fantasy, my dream. She is the epitome of a woman, strong in who she is while soft in her delicate moments. She is accomplished, dedicated, and truthful. Mostly truthful anyway.

She isn’t truly happy in her marriage. She wallows through a promise she made before she knew better. She made a vow to the tree as a caterpillar, and now as a butterfly she simply wants to fly. If not for that tree…that fucking tree.

He holds her to her promise, mostly because he is happy with it. She still turns him on, and he still sees her as that woman he met umpteen years ago. He sees himself in her. He is “better” because of her, and sane because no one else can have her. If he loses her, he loses himself, and if her nails dig into another man’s back his sanity will vanish along with his innocence.

She doesn’t leave him because of a bevy of lies she’s convinced herself are truth.

“My friends will hate me…”

I just shake my head. A beauty with the power of the Universe coursing within her, saddled with such doubt. She’s blunted her sword on a stone of fear, and as such contorted the very meaning of her love with unreasonable expectations. Expectations my experience suggests are false bravado.

“If he loves you he wants you happy…”

“You can only make it on your own…”

“Then they aren’t your friends.”

Cliches no doubt, but honest ones. When my marriage ended, I was shattered. Broken. Insane. Once the waves of insanity subsided I wanted my ex to be happy. I recovered. I’ve made it on my own. I’ve discovered friends, old and new, I love with an undying passion.

I’ve discovered aloneness, and embraced it. I no longer need to compromise who I am to “keep the peace.” I make no excuses for Tom, honor my choices with unequaled strength, and love with a passion discovered as a result of being set free.

I’ve discovered that my ex ending our marriage was a great blessing for me. It sped up the transformation process by allowing me to embrace myself without the criticisms I’d become so used to. Criticisms that are earned when one person has become something far different that the other. Criticisms that rain down from the hell that is a relationship that has outlived its usefulness.

It hurt me, but this pain was my fault. I inflicted it on myself. All she did was seek her happiness, which is her right. When we hitch our “happiness wagon” onto other people, it is, in essence, so that we can blame them for our unhappiness. After all, if she was the reason for my joy, isn’t she the reason for my sorrow? The short answer is, of course, “no.” I am the cause of either my sorrow or my joy.

I made it on my own. It wasn’t always easy, and sometimes the outcome was in doubt, but I made it on my own. I’ve discovered things, met people, and transformed in ways that could never have happened without my marriage ending. I’ve discovered strengths I never knew I had, and joys I never saw before. I’ve become a better parent, a more confident and loving partner, and a man who truly loves himself.

I lost some “friends” in the divorce, but really no one who was really my friend. I’m sure I’ve been judged, but it doesn’t matter. Why? Because I love myself. I’m strong in my survival. And I love. Others need not see this, or believe it, or know it. Those who have are my friends, those who haven’t are free to go elsewhere.

For the most part, she stays with him because she is afraid.

Fear is the excuse we use to do the strangest things. It makes us believe in things that don’t exist, and attack others who can’t, or won’t, believe in our fairy tales. It makes us attack our rescuer, pretend to be something we are not, and settle for something far less than we deserve.

He stays with her because he is afraid. Afraid he will be alone. Afraid that the life he has become accustomed to will fall into darkness. Afraid that he will never love again.

Sometimes you have to be selfish to be selfless.” ~ Edward Albert