Activism as Alchemy: 3 Challenges of an Activist. 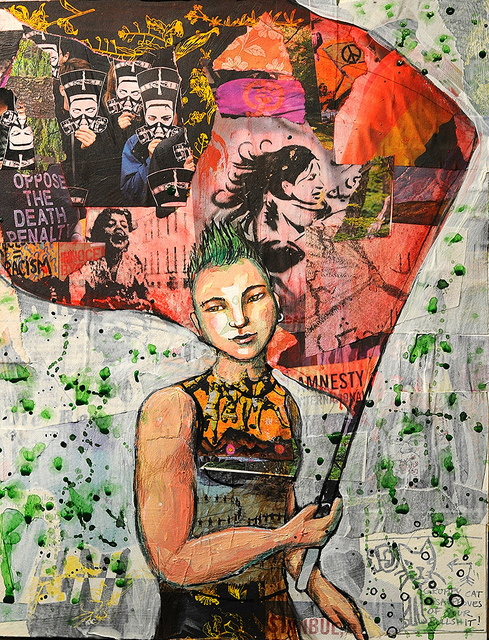 When I first got involved in online activism for Palestine, a close friend warned me that trying to change the world was futile.

A path so fraught with conflict, emotion and ego that it would only distract me from the work of inner transformation.

I believed it was both possible and necessary to do both, and that the two could serve each other.

If we can face the inherent traps of activism without falling into them, this can actually further our inner evolution, which in turn can further our activism.

The spiritual challenges of activism come in many forms and at many levels. Here we’ll focus on three of them.

First is the identity trap:

Activism is action for outer change—the actions of ordinary people seeking to change in a broader social order.

In reality, there are no activists, only global citizens taking action for what they believe to be a broader good.

The action of activism is the action of neighbors passing buckets to put out a fire in someone’s house. To to turn this into an identity is to separate ourselves from others.

We create a class of people who are more aware, committed or knowledgeable than ordinary people and, ultimately, make it part of our own sense of self.

When our efforts to make a better world become a definition of who we are, they can actually work against the better world we seek to create.

Second, is the enemy trap:

It is fundamental paradox of all political struggle that in opposing an enemy, we risk becoming them.

When we begin to believe that they are inherently evil and we, inherently good, we become truly dangerous.

In fact, it is ego—which we all share—that expresses itself in more or less egregious forms in different people at different times. To separate ourselves from others, by labeling them “bad,” blinds us to our deeper commonality with them.

Beyond the initial adversarial relationship with the “other side,” working in a political struggle may bring us into contact with factions in our own movement—particular groups and organizations within factions, clicks and personal rivalries within groups.

These multiple levels of potential conflict all give us new opportunities to fall into the trap of “us and them.”

Sometimes we can identify with a particular group or organization to the point that it obscures the larger cause.

Yet even an all-encompassing focus on the cause itself can be a trap, if it leads us to violate our own basic principles.

Third is the reaction trap:

In social media in particular, we may discover that the power of networking has a dark side.

Alongside the tools and channels for connection and bonding, divisive, implosive forces can be at work, in the form of malicious gossip, character assassination and smear campaigns—which brings us to the ego challenge of the personal attack.

One of the most valuable things we learn from debating trolls online is to take insults without reacting. This is the true practice of “turning the other cheek.”

Allowing insult cleanses the soul, by diminishing that within us that needs to be diminished. Taken metaphorically (and Jesus often spoke in metaphors), a slap in the face is not a physical attack but an insult—the diminishment of ego.

Responding to insult by inviting the insulted to insult again is a way of expressing and practicing that there is nothing to be diminished.

Jesus urges us elsewhere to “take the lowest place” at the table: to have humility. Lack of humility brings humiliation (“pride goeth before a fall”). We are either humble or we are humbled. Thus attacks on our person can be embraced willfully as a form of ego death.

There is another way of interpreting “turn the other cheek” that suggests an alternative to reaction: response.

Jesus’ teaching was very much a critique of the law, which was essentially mechanical (“an eye for an eye”). Getting all members of a complex society to obey certain rules is better than chaos, but there is a higher form of society: one composed of self-aware individuals who no longer need to be told what to do.

Rather than seeing “turn the other cheek” as a literal prescription, one might see it as a call to respond spontaneously to an attack as a free and creative individual.

The reflexive reactions to a slap are either defense or counterattack. Turning the other cheek, on the other hand, is a willful act.

If I follow the law, I am dependent on he who slaps me. If I am free, I have a choice to defend, counterattack, turn my cheek, or any other response I may choose in the given situation. This is in essence the teaching of freedom from the will of the Other.

It is not the particular response we choose that truly matters, but the very fact that we have the inner freedom to consciously choose a response.

When we practice this kind of freedom, we can begin to see our attackers as the unwitting agents of our spiritual evolution—what Goethe’s Mephisto called, “that power that constantly willing evil, does good.”

When we realize that their deep inner nature wants us to evolve, just as our deeper nature wants them to evolve, we can see our conflict as an opportunity for common evolution—a dance in which we are both willingly engaged. That doesn’t mean we have to simply let others hurt us, but rather that responding from this deeper level allows for a response that is right—both for us, but for the greater whole of which both we and they are both part.

Looking back on that conversation afterwards, I am more convinced than ever that activism can be a form of yoga, pilgrimage or alchemy.

This is the magic of life: the soul becoming reunited with itself through the play of external situations. Through our successes and failures—through our practice—we can only do our best to hold the awareness the inner and outer planes of struggle are unfolding simultaneously.

They are in fact, inextricably linked.

We cannot truly fight the outer fight without simultaneously, and primarily, fighting the inner one.

Thus our struggle for change in the world becomes not a substitute but a metaphor for our own inner change, as we simultaneously create a microcosm of the world we would like to see within ourselves.