Go Ahead, Say it: You are Beautiful. You are Super Duper Fly. 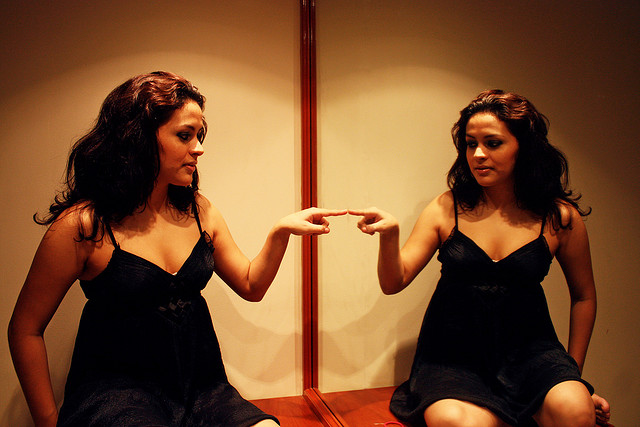 I thought my best friend was crazy the first time I saw her smile coyly at herself in her full length mirror and giggle as she said to her reflection, “You are fly.”

We were going out dancing that night. She was dressed for the occasion, clothes and accessories making her even more beautiful. She glowed, and she told herself so.

I waited in disbelief, dressed in the same utilitarian clothes I used for just about everything, be it work, sitting at home or going out at night.

I barely looked at myself in the mirror back then. I didn’t carry a compact, let alone do more than glance at myself when I was going through the morning rituals of face-washing and teeth-brushing. I averted my eyes from myself, just as if there were an actual other human staring back whose attention I did not want to attract.

I never told my friend this, but later, when I was alone, I practiced. I turned to the bathroom mirror and tried to look at myself. At first the best I could do was a shirt collar or some feature of my body that was not directly associated with my face.

I tried to admire myself, to tell myself that I was beautiful, but I couldn’t. I felt uncomfortable and afraid. I also thought the practice was kind of silly.

But here’s the thing: What my friend did totally set her up for the night.

Her compliments to herself boosted her in such a way that it really didn’t matter what anyone else thought. I remember seeing her dance with complete and utter joy, and she was open to interact with other dancers on the dance floor.

She was beautifully confident. She was bright and connected in a way that I’ve always admired. It was something I wanted to live up to.

I have been thinking for years about how making genuine connections with others begins with having a genuine connection with one’s self. You hear about that thing called self-love all the time. The sentiment goes that in order to love and be able to give to others, you first have to do those things for yourself.

But I couldn’t even look at my own reflection—at least, not until fairly recently, and this, decades later. Before, I would feel embarrassed at myself on two counts: One, I was not sure why something so simple seemed so difficult, and two, I suppose I didn’t feel comfortable with myself.

At times, I felt that I was being frivolously vain. At other times, I was literally afraid of what I’d see in my reflection. There was always some imperfection staring back at me like an acne scar, a crease in the skin, puffy eyes or some other feature I wasn’t sure about like a rogue eyebrow or a facial expression I didn’t recognize.

All I could see were the imperfections, so I shifted my eyes away from my reflection again.

It was difficult to give compliments to myself, but here’s how I began to go about it:

I took a deep breath and faced myself square, looking into my eyes. I simply started by stating, “Thank you for being here.” I didn’t always feel genuine about it. It was something I had to fake until it became real. When it did, there were times I left the reflection with a smile on my face.

I continued by looking at myself in the mirror, smiling, and stating, “I’m proud of you, Tameca.”

Sometimes it was for something as simple as washing the clothes or putting away the dishes.

Sometimes, it was for something as tedious as a full day’s work or errands. Sometimes it was for simply getting out of bed. “I’m proud of you for doing that,” I’d say.

Some days, all I could do was smile. Other times, all I could do was blow raspberries and make funny faces. Other days still, I glanced and shrugged and heaved a big breath before going about my day. I kept practicing anyway. I tried to catch myself when I kept the bathroom cabinet door open as a way to avoid my reflection or ducked down below the reflection’s surface. After a while, I began to realize that when I remembered to thank myself, I was able to face myself.

Lately, there are more and more instances where I can see my own glow; I see someone reflected back who I am genuinely happy to know.

On those days, I leave the house happy. My head is high. I make new connections and I truly believe that I am fly.

Say this Next time you Look into a Mirror.