Kim Davis & Naaman the Syrian: The One Argument No One has Made. 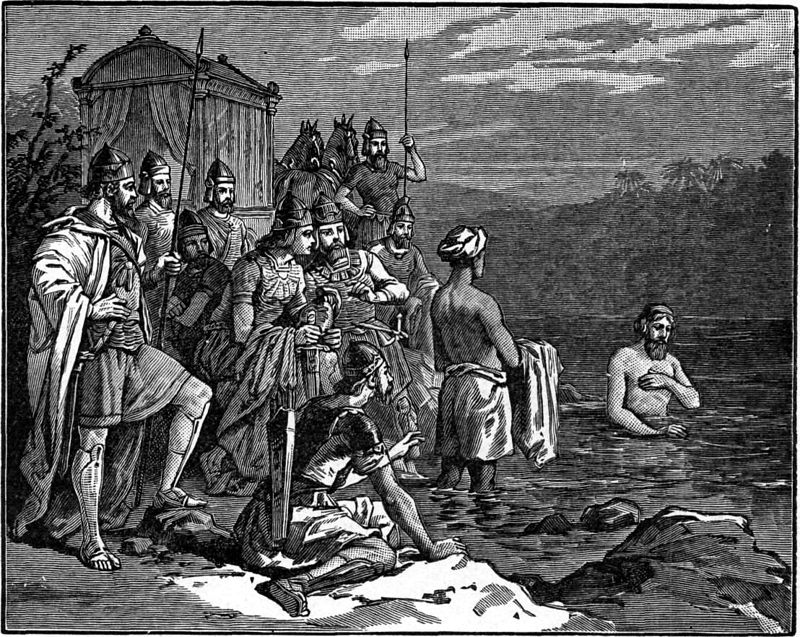 Kim Davis, the recalcitrant clerk of rural Rowan County, Kentucky, went to court yet again in her bid to sabotage marriage equality, which the Supreme Court’s decision in Obergefell v. Hodges effectively made the law of the land.

Davis claimed, before the Sixth Circuit US Court of Appeals, that US District Court Judge David Bunning’s order—that she begin immediately issuing marriage licenses to same-sex couples—only applied to the four couples who originally sued her after she stopped issuing all marriage licenses in June. On Thursday, the court ruled against her.

There is no telling at this point whether Davis will try yet again, or when two other Kentucky clerks—Kay Schwartz of Whitely County, who still plans to refuse marriage licenses to same-sex couple should any ever ask for one, and Casey Davis (no relation) of Casey County, who isn’t issuing any marriage licenses at all—will darken the doors of our courts of law.

With well-funded right-wing legal organizations supporting them, it seems likely to be a question of when rather than if.

We’ve heard a lot of yell-y and ineffective appeals to the First Amendment, which never work because these people simply do not understand it. Whether they think their right to discriminate is a God-given right protected by the First Amendment, or they believe, as many do, that the First Amendment applies only to Christians, you are simply not going to get them to see reason. More than their beliefs, their very identities—their sense of self—is bound up with this spurious “Christian Nation” ideology, and they allow it to be called into question at the peril of their self-understanding and worldview.

And I fear that simply continuing to let justice take its course as the shirkers get drubbed in court again and again is only going to make martyrs of them, stoking resentment among their supporters and feeding into the “lawless activist judiciary” narrative behind so much of the far Right’s angry rhetoric.

While the legal battles go on—as they should—I would like to see some good-faith engagement with the conservative extremists in their own terms, for the purpose of maybe softening some hearts and opening some minds.

You may say I’m a dreamer, and I hope I’m not the only one.

But it sometimes feels like I am. There is a simple Biblical argument to be marshaled here—one so elegant and screamingly obvious that I’ve been waiting for months for someone to put it forth. So far, no one has, as far as I can tell, so it is apparently up to me.

Naaman, a Syrian general, went to visit the prophet Elisha in Samaria. Naaman had a virulent skin disease (one of many such diseases called by the catch-all term “leprosy” in the Bible), and his wife’s Hebrew slave-girl had suggested that the prophet could cure him.

When Naaman arrived at Elisha’s house by the Jordan river, the prophet didn’t even deign to come to the door to meet him, instead sending his servant with a message. “Go and wash seven times in the river Jordan, and your skin will be restored, and you will be healed.” (2 Kings 5:10)

Naaman was, understandably, put out by this treatment.

“I thought for sure he would come out,” Naaman said, “…invoke the name of the Lord his God, wave his hand over the area, and cure the skin disease. The rivers of Damascus…are better than any of the waters of Israel! Could I not wash in them and be healed?” So he turned around and went away angry.

Then one of Naaman’s servants dropped a bit of blazing spiritual wisdom on his master.

That was hard to argue with, so Naaman did just that: he washed, and his “skin became as smooth as a young child’s and he was healed.” (2 Kings 5:14b)

Elisha came out of his house at this point, and Naaman was so awestruck and grateful that he repeatedly pressed lavish gifts on the prophet, which Elisha refused.

Did you catch that?  No sin is more serious, more frequently mentioned in the Hebrew Bible, than idolatry—the worship of anything that is not God. “You shall have no other Gods before me” is the very first of the Ten Commandments. And not only foreign gods, but one’s own appetites, desires, greed or corruption are all held up in the Hebrew Bible as “idols”—things to which we offer the worship due to God alone.

And yet Elisha gives Naaman a pass on bowing down before a pagan idol in a pagan temple—because it was his job!

Israelites under the Roman occupation had to navigate the contradictory facts that: 1) Rome required tribute, and 2) Jewish law forbade the paying of tribute. When tasked with this conundrum, Jesus famously asked the questioners to show him a Roman denarius. “Whose head is on this coin,” He asked; “Whose inscription?” “Caesar’s,” they answered. “Then pay Caesar what is due Caesar,” Jesus rejoined, “and pay God what is due God.” (Mark 12:16-17)

We often hear this passage trotted out in disagreements over school taxes, military expenditures, and other strictly money-related subjects—but marriage-equality disputes have proven stubbornly immune to this argument.

The next time a Christian conservative starts holding forth about gay marriage violating his or her religious freedom, I suggest combining this line from Jesus with the story of Naaman, as in:

If Naaman could bow down in the Temple of Rimmon, you can pay Caesar what is due Caesar.

Or if you prefer the message in visual form: