These are the Enemy Targets of the U.S. and Russian Air Strikes. {Video} 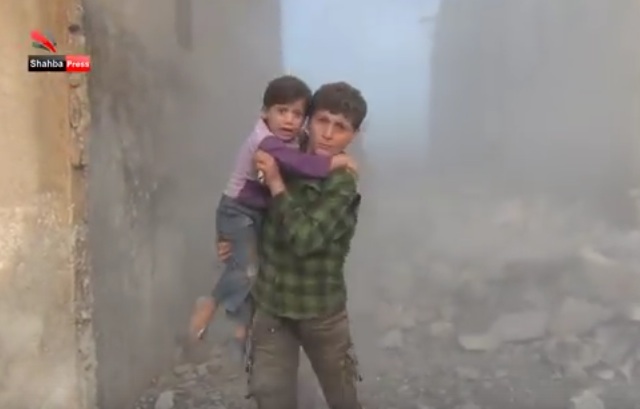 My father was working in Saudi Arabia when Iraq invaded Kuwait in August, 1990.

He lived on the East coast, roughly 600 kilometers from the border with Kuwait and Iraq. I was 15 years old and safely tucked away in a boarding house in The Netherlands. My mother and my younger brother had been evacuated from Saudi as soon as the war broke out. But my father, and many other expat men working for multinational companies operating in the area, stayed behind to keep the refineries running.

And of course, the locals had nowhere to go anyway.

The U.S. immediately intervened (petrol, you see?) and started building up troops in the area to defend Saudi Arabia amongst others. Without getting into the details of the political and military strategies that ensued, suffice it to say that in January 1991 the negotiations ended and the U.S. started bombing Iraq.

According to Wikipedia, three days earlier France had actually,

“…proposed that the U.N. Security Council call for ‘a rapid and massive withdrawal’ from Kuwait along with a statement to Iraq that Council members would bring their ‘active contribution’ to a settlement of the region’s other problems, ‘in particular, of the Arab–Israeli conflict and in particular to the Palestinian problem by convening, at an appropriate moment, an international conference’ to assure ‘the security, stability and development of this region of the world.’ The French proposal was supported by Belgium, Germany, Spain, Italy, Algeria, Morocco, Tunisia, and several non-aligned nations. The U.S., the UK, and the Soviet Union rejected it. France dropped this proposal when it found ‘no tangible sign of interest’ from Baghdad.”

Malesh, as we would say in Egypt; never mind, we tried.

As a result however, I was glued to CNN for weeks from the moment the deadline passed on 17 January 1991 and the bombings started. It was the first war to be broadcasted live.

I mainly remember night vision images of incredible displays of fireworks, smoke and destruction of military targets and fervently hoping that the town of Al-Jubail on the East Coast of Saudi Arabia would not be reported hit by an Iraqi Scud or a misguided U.S. Patriot missile.

Thankfully, it all ended well for my father and all the other residents of that particular area. But not everyone was so lucky.

I was left imprinted with CNN images of heroic U.S. soldiers, fields of oil wells on fire and destroyed enemy targets. I don’t remember seeing much coverage about civilian casualties, the disasters of war. No Facebook, no Twitter, no instant news online.

There was controversy about civilian casualties, but no mass platform for opposing voices or any angle other than the U.S. policy-driven one.

Besides, I was just a teenager, so what did I know anyway?

Knowing what I know now, I realise how ignorant I was in ever thinking Desert Storm operations were a good thing. I slowly grew a little bit wiser over the years.

And today, 25 years later, I hear them talking about enemy targets again. In Syria, for example.

About a month ago, The Guardian wrote:

“Russia insists its air campaign is intended to target the Islamic State group and others it describes as “terrorists.””

As the U.S. and Russia joined forces in their war on terror in Syria, they put in place a “memorandum of safety” to ensure air safety. I think it’s fantastic that they ensure the safety of their own.

Now that they’ve sorted that out, perhaps they should redefine who their targets are, because these are the enemies they are hitting (video below).

Whatever the media’s reasons for publishing and broadcasting only certain subjects or points of view, it is never the complete picture.

There is more happening behind the smoke curtain.

When you watch this video, remember that all you see on TV is not all there is too see.

The English text posted on Facebook accompanying this video reads:

“Watch the last video filmed by Juma Al-Ahmad (Abu Noor), Director of Shahba Press in the town of Hayan in Aleppo Suburb. on Tuesday October 27th 2015, Russian Airforce attacked four times the city of Hayan. Juma Al-Ahmad managed to document with his camera three strikes, however the fourth one, the camera has been shut forever. Al-Ahmad died while trying to tell the Story of his country to the world. He pass away but his camera is alive to be a witness to the atrocities in Aleppo.”

Letter From a Veteran: I Didn’t “Serve” Our Country, So Please Stop Thanking Me.