The Bumpy Road to Peace: The Practice of Making Mistakes. 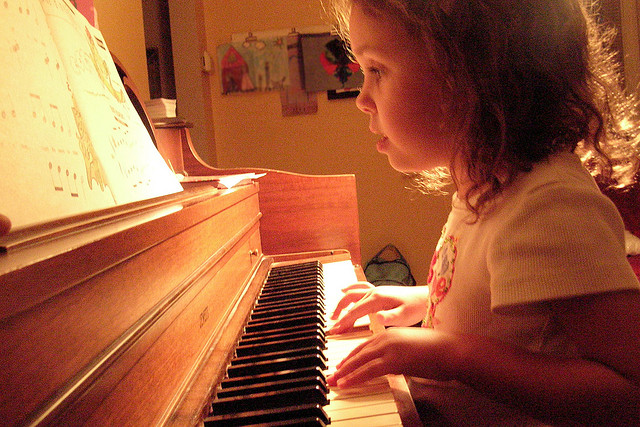 Practice does not make perfect. It makes manageable what we’d like to perfect, knowing that we never will.

I type these words as my Berklee School of Music man of a partner learns a Christmas tune one of his students asked him to accompany her for at her recital this Saturday. He’s a juke box, so why is he still practicing?

A week ago, this tenacious man, said to me, “Name me one thing in life that isn’t instinct or based in senses that anyone learned without fucking up a few times.”

I’m slowly shape shifting out of a thought pattern that was an adhesive to my identity for a majority of my life that set me up to never fail.

If I didn’t try, I couldn’t be responsible for failure.

The most complex (and what is gearing up to be the most rewarding) cure for fearing failure is to try, over and over again.

When I was 10 years old, my sister french braided my hair, my mom made me wear a homemade dress she worked diligently to create, and I walked up shyly to the piano bench in front of a crowd of people sitting in pews.

I began my recital song and the moment I made a mistake, I pounded all of my hands on all of the keys and stopped. I stared at the music in front of me frustrated and paralyzed. Everyone waited for me to try again until my piano teacher came up and spoke for my insecurities and excused me from the bench.

I was raised by a mother who wanted to toughen me up for the world while also giving me a childhood she never had. She was meticulous and impatient. I wanted to help, or at least learn a trade so I found a reason to feel adequate but every attempt was either excused as another failed attempt at getting it right, or excused because she would take less time to do it herself.

The laundry room in college was daunting when I left home two weeks after my eighteenth birthday. My roommates were gentle enough to laugh with me about the fact I had no idea where the hell to put what. Here though, I had to try or it wouldn’t get done. Laundry was my first taste of trying anything in my life where I got to be the one who judged whether it was “good enough.”

I never did master the “try until perfection part,” and I’m happy I didn’t.

I still don’t sort colors or use appropriate levels of laundry detergent. But I have managed to find peace in the practice of hanging laundry on the wash line on warm spring afternoons.

Anything that takes practice will always be just that—practice.

So as this mastermind of a musician man of mine, strives to perfect a song for the benefit of one of his students happiness, I am in awe of his tenacity to fall with grace.

My falls never seems so graceful. They felt much more like I fell into a pile of glass shards, bleeding, and then somehow someone always came along to kick me when I was down.

His falls are much more likened to falling hysterically into a snow mount and getting up and doing it all over again. He doesn’t leave time for anyone to come around to kick him because he’s in control of his fall. Actually, he’s inviting it.

He invites mistakes because he values them as part of his process. I, on the other hand, have hated mistakes as a symbol for hating myself. He sees mistakes as his teachers and in witnessing him, I am learning from the teachers he lets himself learn from.

Clients come to me be guided into a more mindful way of living. They come to me often saying, “I’m not sure what I’m looking for but I know you have it.” I do not wish to teach them “me” I wish to guide them on the road to the peace that I have come to know and practice is the most important part of it.

My mother put me in every extra curricular activity imaginable to show me things other kids dream of doing, and my sensitive little heart was constantly terrified. I would not try, because I would inevitably make a mistake, and when I made a mistake, it reminded me that “I” was a mistake.

To my partner, a mistake proves that he is alive.

The practices that led me to peace, were all silent practices. They were all inner practices that didn’t expose my mistakes. When I made a “mistake” that was out of integrity with my desire for authenticity, I was only person to know so my redirection came solely from me, not from an instrument, a person, or anything outside of myself. This caged my insecurities.

As I step out to share my peaceful practices with the world, the scripts of mistakes and “I am a mistake” pop up. This does not bring me to my knees in paralyzation anymore. It reminds me that peace, like anything else worthwhile, is a practice. Peace is funny because it also demands that the more you know if it, the more you share it, and the more you share, the more likely the ego is to notice mistakes.

Peace is not something we can drop the ball on once we think we’ve entered into its house. There are always open windows to jump out of, that at times feel very alluring.

Peace gives me permission to be my 10-year-old self banging my hands on a piano and giving up in front of an audience, but if I want it to be my only master, it does not give me permission to give up on myself as an undeserving mistake.

Peace is a practice forever and always (so long as we’re bodies).

As we journey through it, it will sometimes feel hard, sometimes lonely, but when we know it, we also know too much to ever leave it. That…is where the practice begins.

See mistakes as teachers and not opponents. This is the first practice to learn from peace.

May peace be your practice and practice being your peace.

Keep with its teachings even when you’re banging your hands on a piano begging to give up in front of an audience.