5 Things Your Schizophrenic Parent Wants You to Know. 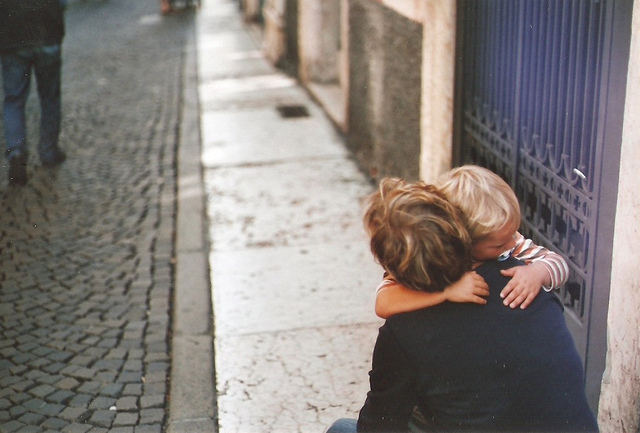 My childhood home was a very confusing place to spend my formative years.

I always knew my dad loved me. He told me frequently that he did. He always praised my intellect, my accomplishments, my appearance.

Sometimes, he was the sweetest, gentlest, most encouraging person in my world. And sometimes, he was out of control, angry, confused, emotional, and raging. I experienced things that no little girl ever should. Navigating my relationship with my dad has been one of the greatest challenges of my life.

My dad is schizophrenic. It took years for me to be able to say that, due to the stigmas associated with mental illness in our culture. He was diagnosed long before I came into the world. I’ve only known the bi-polar, paranoid, schizophrenic version of my dad. When I was younger, I lacked the emotional maturity to extend real empathy and compassion to him. I was too angry to stop and think about what it must have been like for him living with his illness.
I think if he were able to articulate these things, this is what he would have wanted me to know all these years.

Certainly, any parent dealing with mental illness may have these same feelings and thoughts.

The hallucinations schizophrenics deal with every day become part of their reality. I wasted a lot of time and energy arguing with my dad. I would get frustrated with him when he wasn’t able to see “the error of his ways.”

Then, I realized that if something is true for him that alone makes it true. There is no need for me to try to talk him out of it. There is also no need for me to accept it as my truth. Certainly, I could try to give him some kind words to soften the horrible things that would come into his world from time to time, but at the end of the day, what goes on inside his mind is not my responsibility. His perception is always going to be his reality, no matter how much we fight about it. The only thoughts I can control are my own.

My dad is still apologizing for things that happened thirty years ago. I know he carries a deep guilt, and as many times as I have forgiven him, I’m just not sure that he will ever be able to forgive himself. Living with these regrets causes him so much pain.

I think about the things that I wish I had done differently with my kids, and always hope that they don’t hold my shortcomings as a parent against me. Letting go of parental regrets is difficult, but vital to foster healthy relationships in the here and now. We can’t go back and change what is done. We can only forgive, and give unconditional love in this moment.

3. “I do not intentionally do things to upset you.”

One of the most frustrating things when dealing with a schizophrenic parent is the constant battle to keep them properly medicated. Typically, when they are feeling their worst, it’s pretty easy to convince them that they need their meds. Gradually the meds start working, they start feeling better, and then they decide they don’t need the medicine anymore because they feel better. Or, they will become frustrated with their complicated cocktail of medications. The doctor’s instructions go out the window and they begin to self-medicate. My dad is notorious for picking and choosing which medications to take when, depending on how he feels, and then supplementing with things like nicotine, caffeine, and alcohol.

It’s important to understand that these conditions are all due to imbalances in the brain’s chemistry.

Taking medicine correctly and consistently and avoiding other substances that impede their efficacy is very important. It’s also very difficult, and ultimately, it’s the responsibility of the person being treated to do what they need to do to be well.

Watching our parents do things that are detrimental to their wellbeing is also frustrating. My dad’s erratic and sometimes reckless behavior used to infuriate me. It was so hard for me to watch him being self-destructive. We would have stern conversations, and the behavior would continue anyway.

Realizing that my dad’s behavior was his responsibility and not mine was a big step for me. Not taking anything he said or did personal was the real breakthrough. There was no use in my being frustrated and angry with him. He never set out intentionally to make my life harder. He was just doing what felt right to him in the moment.

Though I may never make sense of the things he does, I know that his patterns and compulsions cannot be changed through any amount of pressure from me.

4. “My greatest fear is that I will pass this disease on to you.”

I can remember from early childhood my dad telling me that he prayed every day that God would not let me have his illness. It weighed on him constantly that because I carried his DNA within my young body, I might one day suffer the way he suffered. I’m not sure which one of us was more relieved when my early twenties came and went without any signs or symptoms. I don’t think my dad would have been able to live with himself had I become ill.

It would only have added to the mountains of guilt, shame, regret, and self-loathing that he already deals with.

I spent a lot of years being angry with my parents for not doing all the things I thought they should have done differently. Now, I realize that just like every parent (myself included) they did the best they could with their given circumstances. I know that my daddy would have given me the moon and all the stars if it was within his power to do so. I know he loved me to the best of his ability while enduring the constant torture of his disease. I can no longer fault him for his mistakes. I can only forgive him, knowing that truly, he would never have intentionally done anything to hurt me.

Being an adult with a schizophrenic parent is not easy. If there is one piece of advice I can offer to anyone in this situation, it’s this: healthy boundaries are your responsibility. We have to be willing to make our own emotional wellbeing a priority, and set the boundaries that most support us in that. We have to give ourselves permission to do what is in our best interest in every moment.

For me, this has meant putting some distance—both emotional and geographical—between myself and my family. There were times in my life that I thought it might be necessary to sever ties completely. Instead, I have learned to love him and accept him disease and all. I stopped trying to change him, and started looking at him with more compassion.

I love my daddy, and I know that he loves me, too.

As soon as I let go of trying to change him, or wishing I could change the past, our relationship became more loving and peaceful.

How to Work with a Loved One with Mental Illness.

My Grandmother’s Schizophrenia Fueled my Purpose.