Drinking the Water of a New Life. 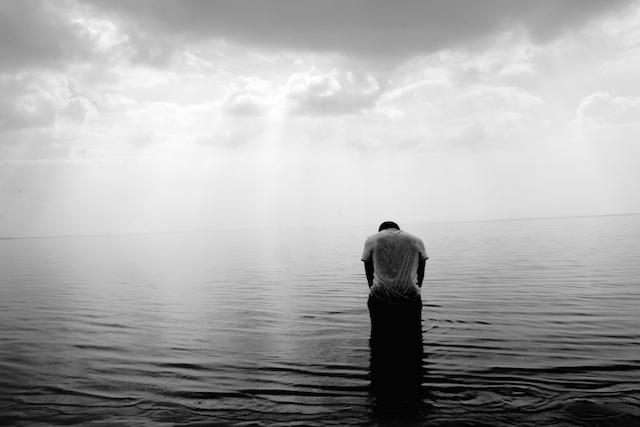 I just returned from a reprieve in the Bahamas that was rejuvenating, but not for the reason you might think.

Sure, it is a lovely place, with swaying palm trees, waves splashing and crashing on white sandy beaches and tropical breezes caressing sun-warmed skin. It’s understandable that I would feel the way I do a week later. My invitation to board a plane and wing southward from the Philly airport came in the form of an email from my friend, best-selling transformational author Joan Borysenko. She was going to be teaching at the Sivananda Yoga Ashram in Nassau, a workshop called Writing Down the Light.

The focus of the three day retreat was re-scripting our life stories as a means of re-wiring our brains and creating anew. I was on board with that, since it is what I have been doing for the past year and a half following a series of major health challenges. Like many who are reading these words, I knew that I couldn’t return to “normal,” since that state was what led me to the crises in the first place.

Change was in the wind.

An immediate YES resonated through me, as I registered that day. With frequent flyer miles, I was able to book a flight as well. You know how it is when you sign up for a workshop, it has already begun as the lessons come fast and furious?  Yup. Here too. As I did a life review in preparation, I began to see times when I believed certain limiting thoughts that would come careening in. As much as I had become familiar with their presence, I knew I had to clean house to welcome in new energy and people.

I have been a long time meditator and yoga student, so I packed up my yoga mat, comfy lightweight clothes and fit all I needed into two carry on bags. My experience with checking luggage has led to separate vacation destinations for us. They never told me whether they had a good time when we were ultimately re-reunited by the end of my stay wherever I went. Although I wanted to lighten my load in life, I didn’t want to take that chance. Letting go of emotional baggage would be sufficient.

I always plan on smooth sailing when I travel; doing as much pre-planning as possible and knowing that sometimes delays occur. I zipped through pre-flight check in, got to the gate early enough to settle in comfortably and entered the nearly empty plane. Got an entire row in which I could sprawl, as I napped and read during the less than three hour trek.

When I arrived in Nassau, huge rolling clouds hovered over the island. Drizzly rain sprinkled down. By the time the cab, which was decorated with tapestry covered seats and resonant with the sound of classical music wafting through and conversation with the driver named Jackson, arrived at the dock, the winds were kicking up, tossing the waves.

Uh oh. I have had a history of seasickness and dreaded the thought of heaving over the side of the boat. Fortunately that didn’t happen. What did occur was that we were wringing wet by the time we traversed the short distance; but also drenched in laughter. The first test passed with flying colors. We were welcomed by the smiling staff and other attendees who arrived before us. They hailed from all over the world, spoke various languages and were there for many different reasons.

All of us seemed to be at crossroads in our lives and in transition.

The ashram was founded by Swami Vishnudevananda who followed the teachings of Swami Sivananada. Both men were born in India and found the path of devotion (Bhakti yoga) and service (Karma yoga) to call them. The former piloted a plane that was painted by iconic artist Peter Max over war torn places, dropping flowers and leaflets encouraging union rather than division.

He offered the mantra Om Namo Narayanaya which is meant to invoke a sense of peace to be shared throughout the world. Although I was not intimately familiar with these two men or their teachings, I felt a sense of alignment with their interfaith leanings. As I was sitting in the room in which twice a day chanting, satsang and workshop time took place, I gazed at the photo on the wall of Sivananda and found myself spontaneously crying, as if he was seeing into my soul and calling me out.

I felt a kinship to this man who had died when I was five years old. I am not a follower of gurus, but see them as inspired teachers. He seems to be such a one.

Calling to mind his image brings me comfort now that I am home.

During the workshop component of my time there, Joan led us through several revealing writing exercises that allowed me to peel back layers and do my own version of psychic surgery. One involved writing our own poem based on one penned by Spanish poet Antonio Machado.

We were take the snippet from the much longer piece (a portion of which I have included below)—the line “water of a new life,”—and allow it to inspire us as we wrote our own.

Last Night As I Was Sleeping

“Last night as I was sleeping,
I dreamt—marvelous error!—
that a spring was breaking
out in my heart.
I said: Along which secret aqueduct,
Oh water, are you coming to me,
water of a new life
that I have never drunk?”

What emerged for me from the line “water of a new life” was this:

Water of a new life

Flowing through me and around me

Bubbling from a fountain I have seen many times before

But dared not approach

Fearing I would drown in its depths

Desiring, craving, longing for its

Parched heart, aching for the relief

Wondering whether it is illusory and elusive

Dissolving like early morning mist if I dared reach for it

Questioning if it was meant for another and not for me

With courage, I stretch my arms toward it

With trembling body, I extend my fingers to touch it with their tips

And immerse a cupped hand into its cool depths and raise it to my lips, sipping tentatively

I wonder if I will ever drink my fill

I remind myself to drink slowly to savor it

I remind myself that it is both a gift of God-given grace, as well as a well I have built

I remind myself that there is plenty to share

And welcomes another seeking soul to join me in drinking deeply.