Sex in the Red Tent: The Power of the Goddess. 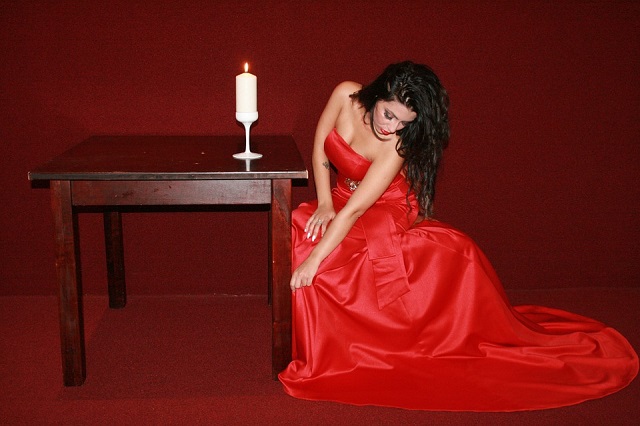 The Red Tent, whether it actually existed during Biblical times or not, represents the retreat a menstruating woman would make away from her tribe.

Here she would find respite from her daily duties and be attended to by other women.

Viewing this from afar, I can find beauty in such a tradition, for how often do women actually find time for respite, especially to be attended to by her tribal sisters?

Looking further into this tradition, I see that it was also a way in which during this “unclean” time of the month, women would be separated from men and their sacred religious tools. A menstruating woman posed a threat of sorts within a patriarchal society and she was removed from the tribe until she was deemed clean once more. This applied during the act of childbirth as well.

I’ve tried to gather whether the tradition of the Red Tent began because there was just too much blood and mess for the masculine to bear, was it a thoughtfully designed retreat for women or was there a blatant fear of the power of the Goddess?

I can only speculate on the many layers of what the Red Tent represents for both the feminine and the masculine, but I do sense the separation keenly. It has caused me to want to meditate on what truly there is to be afraid or in awe of, about the power of blood.

Let me tell you another story from the Native American tradition this time, about a woman’s moon time. I resonate with this story much more than the biblically influenced Red Tent one, probably because of my adherence to the Wise Woman Tradition.

I’ll tell it as I remember it being recited by an elder I met at a sweat lodge ceremony, so please forgive me if I have left anything out or forgotten the exact nuances. I greatly respect the tradition of storytelling so if there are missing elements in this story the fault is entirely mine.

One day, Woman went to the wilderness to cry out about the burdens she was carrying as a wife, mother and caregiver of the clan. Nature answered her call in the form of the Raven, who asked her why she was crying.

Woman told him about all of her burdens, and that while she loved her family, she could no longer bear the weight of all that she had to do.

Grandmother Moon, who represents the Feminine, said she would send the waters of the Ocean to women every month to cleanse them and offer respite.

While there is such beauty in this story of women embodying the power of the ocean, which represents the womb of Earth Mother and the miracle of creation, there is still that element of separating women away from the men during their moon/unclean times.

As the elder explained to me, a woman in her moon time would not have been welcome around sacred tools that the men would use in ceremony.

I’m all for respite and honoring a woman’s right to find healing and sanctuary among her sisters. Often, during my moon time, I would choose to use my low ebbing energy to ground myself and find introspective ways of recharging. I also adore the Native American way of women offering their flow to Mother Earth. So many of my sisters have now picked up this tradition and will “water” their garden with their moon flow, straight or diluted.

Around the same time that I attended the sweat lodge ceremony—which remains a pivotal day in my life—I was given a book by a friend and sister in Goddess studies. I believe in synchronicity, and this book could not have come to me at a better time. Actually, my friend first gave it to my partner to read if I am to be completely honest, and it was he who began a discussion with me about the power of menstrual blood and Goddess energy.

The irony of the masculine discussing such matters with me is not lost on me; and I have long ago given up having expectations of who my teachers will be. But hang on to your diva cups, because this story is about to leave the stratosphere.

The book my partner and I were given is called Earth, Pleiadian Keys to the Living Library, by Barbara Marciniak.

In this book, Ms. Marciniak channels the wisdom of a group called The Pleiadians, essentially grasping the invisible and translating it for those who want to partake in the teachings. I’m a channeler myself so this sort of thing is not alien to me and I was eager to hear what this particular group was saying about the power of blood.

Here are a few adapted points taken from Earth which have helped me to have a better understanding of what a woman’s flow is truly about and how it influences all of life.

* A long time ago, when Goddess energy was predominant on Earth, (matriarchal society) there was a mis-use of power and the masculine was abused. Basically, men were used in fertility rites and sometimes castrated or sacrificed, and instead of being honored for their contribution to the begetting of life, they were objectified.

* As the pendulum swings, it always goes to the opposite extreme before it finds balance. The patriarchal society was born and until now we have experienced an extreme suppression of the Feminine, where women have been subjected to the backlash of what happened before. Goddess mysteries were feared and ultimately, buried deep in the subconscious and under patriarchal religious rule. With the dawning of the Age of Aquarius, we are now coming into a more balanced Feminine/Masculine co-existence.

*Blood is rich with stories, connections to the past and the future and is in fact a catalog of genetic blueprints. Our thoughts are recorded within our blood, say the Pleiadians. Menstrual blood is highly oxygenated and carries de-coded DNA. How powerful is that?

*Enter the Moon, which is like a giant electromagnetic computer controlling the tides, our blood flow and fertility. Under the guidance of the moon, we are fertile each month, if we were guided by the sun we would only be fertile once a year, which would have a huge impact on world over-population, and according to the Pleiadians, we are on our way to evolving into being only fertile once a year…may explain the less fertile male/woman in recent times to a degree. The Sun is a masculine expression which would enter in once the Goddess was once more established on the planet.

*The blood is very mysterious to man because he does not experience it like a woman. For a man to experience blood, he must shed it by violence. And so our pattern of war over the centuries as man desperately tries to tie into the mystery. (This is where I began to have an Aha! moment)

*Because the blood carries so much power and influence, women have gone through a cycle of being told that they are unclean. Therefore they could be hidden away while their blood was visible, their power could be negated and their wisdom extinguished.

*To re-connect the Masculine and the Feminine once more, a woman can mark a man with her menstrual blood on the back of his neck and the soles of his feet, and he will absorb the ancient knowledge within it. Are you thinking ‘yuck’, ‘eeew’ and the like? If yes, I would not be surprised because we’ve been taught that it’s dirty and to hide our blood from our men.

*The sperm carries the code of intelligence for the evolution of consciousness. Imagine the leaps we could take as humans if we regularly allowed menstrual blood and sperm to mix during sacred sexual encounters? ~ Adapted from Earth, Pleiadian Keys to the Living Library

Because it is indeed a sacred act to join in intimate relations while menstruating.

*The deepest of secrets are shared—the sperm can act as an explorer and send telepathic messages back to your partner, so he will truly ‘know’ you. That is pure magic right there.

“To have sex with a woman when she is on her blood time is one of the highest vibrations because you go through doorways to other realms. To share the blood is to take on a higher consciousness.” ~ B. Marciniak.

When a woman enters her menopause, or her “Crone years,” she holds all the blood within her and no longer offers it for nourishing the planet or the masculine. And so she enters into her Wisdom Years. All the more reason to honor our elders.

No matter which time we are in, women are the holders of the mysteries of creation. We are coming out of our exile and becoming resplendent in our sexuality.

For a closer relationship with the masculine, consider sex in the red tent.