The Real Tragedy Behind the Virginia Tech Murder Case. 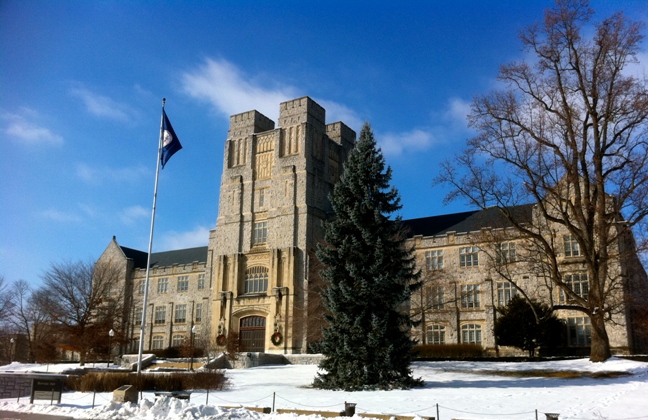 When the story first broke about the two Virginia Tech students who are charged with abducting and murdering a 13-year-old girl, I told myself I wasn’t going to follow it.

Even for a murder involving a child—a crime which, by its very nature, is always senseless and tragic—the situation of the victim Nicole Lovell stands out as even sadder than most.

For those who don’t know the story, here it is in a nutshell: On Wednesday, January 27, 2016, 13-year-old Nicole Lovell went missing from her Blackburg, Virginia, home. By Sunday, two suspects, 18-year-old Virginia Tech freshman David Eisenhauer and fellow 18-year-old student Natalie Keepers were arrested for her abduction and later murder. (As of this writing, Eisenhauer has been charged with first degree murder and Keepers as an accessory to murder before and after the incident.)

By the age of four, Nicole had already undergone more suffering in her short life than most adults do by the end of theirs: she survived a liver transplant, cancer, acute respiratory syndrome, and MRSA which she developed during a hospital stay and was given a one percent chance of survival.

Despite surviving all these health conditions, Nicole’s problems were far from over.

Per her mother, her daughter was a frequent target of bullying by girls at schools who teased her for being overweight and having scars from her medical procedures. Apparently, the bullying was so bad that her mother kept her home from school on at least one occasion.

As a result of being bullied in real life, Nicole spent a lot of time online, apparently looking for friends and a possible boyfriend. On a site called “Teen Dating and Flirting,” she posted a photo of herself asking others if she was “cute” or not. Per The Washington Post, “of the 304 responses, most were overtly vicious” including one by a poster who said Nicole was “fat and ugly” and that they would “pass.”

It was on another similar site that Nicole allegedly met 18-year-old David Eisenhauer, the man who is now accused of murdering her and whom she allegedly told an eight-year-old in her neighborhood was her “boyfriend.”

While the facts are still coming together as to what exactly happened to Nicole and what sort of relationship the two may have had prior to Nicole leaving her home on January 27th, numerous people both in the media and on social media have asked why Nicole or any 13-year-old would be on a teen dating site in the first place. As one acquaintance put it: doesn’t a 13-year-old have better things to worry about than getting a boyfriend?

As someone who was severely bullied in middle school, Nicole’s online quest for friendship and “love” made perfect sense.

In addition to all the other feelings bullying brings up, being bullied leaves the victim feeling lonely. On top of the taunts and insults, there is a clear message being sent to the target—”We don’t want you around.”

Thinking that a boyfriend or girlfriend is going to make us happy isn’t just reserved for naive 13-year-olds. Many adults feel the same way.

How many us adults can honestly say we’ve never gone online because we felt lonely or just had the desire to connect with another human being, no matter how small or mundane the connection? Most of us stick to chat sites where we know our opinions and views will be accepted. We post things on social media to get likes. Even so-called trolls-those who post negative things just for the sake of getting a rise are fundamentally looking for attention.

And there is no denying that for most, the middle school years are a period of extreme upheaval and angst. In my case they were absolute hell at times especially when it came to issues of body image. I looked “different”—Asian—and was taunted relentlessly. I was also convinced that I was ugly compared to the images of the supermodels that surrounded me and everyone else in the early to mid 90s. Still, as bad as it was, at least I didn’t have to worry about internet bullying or being constantly bombarded with images of Kendall Jenner, Kaia Gerber or other “perfect” teen models on Instagram and various entertainment sites.

Therefore, it doesn’t surprise me in the least that Nicole or any other teenager in similar circumstances would turn to these sort of sites.

Indeed, the only thing that did surprise me was when a few commentators described the photos she posted as “coquettish.” While nearly all descriptions of photos are subjective and more often than not say more about the commentator than the subject(s), I saw those photos and saw a child desperately looking for positive attention. It was a look I was all too familiar with.

While no one can go back in time and save Nicole Lovell, there is a possibility that some good may come of her tragic death. In addition to raising parental and teacher awareness of the dangers of online teen dating sites and apps, Nicole’s senseless, sad death is a powerful reminder of the power of empathy.

I believe in waiting until all the facts are in when it comes to any murder case, but it is a safe assumption that if Nicole’s real life peers had been kinder to her, she may not have spent so much time online looking for love. I wish that when she asked if she was “cute” or not, a fellow teen would have told her that the truth: that she was beautiful and that beauty had nothing to do with the outside. Based on all accounts, she had amazing moxie, she touched a lot of lives in the short time she was on this earth, and even the scars that she was teased over were beautiful, if only because they served as reminders for all she had overcome.

I also wish that someone had explained that having a boyfriend would not make her happy. True happiness comes from within and, especially in Nicole’s case, loving herself for the unique individual that she was.

While some cynics may say that teenagers aren’t the best conduits for empathy, I disagree. Not only do I know teenagers who are exceptionally empathetic, but I also know empathy is a learned trait.

The best way that they learn is through example.

As a parent, I feel it isn’t just my job to monitor internet activity, but also to teach my children the value of kindness—both toward themselves and other people.