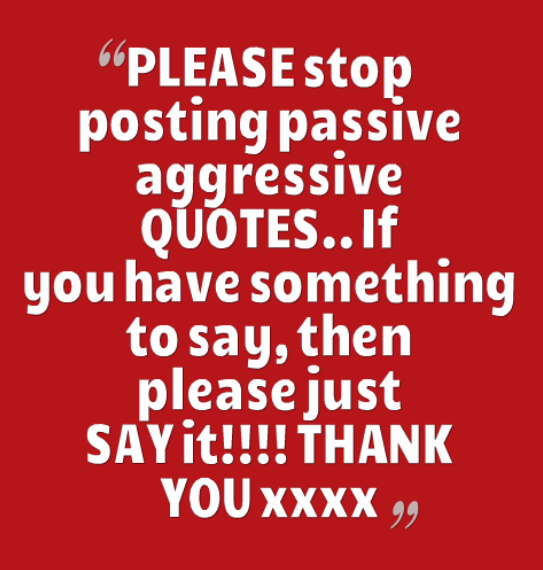 Social media is the ultimate weapon of choice for many who wish to openly display their passive-aggressive opinions. With one simple Facebook post everyone we are in contact with immediately receives a glimpse of how we are feeling.

Therefore, if we are Facebook friends with someone who has slighted us, it only takes a moment for us to subliminally and passive-aggressively let them know.

The classic method of passively displaying aggression on social media is via quotes and memes that say something, often seemingly politely, gracefully or even cryptically, but the intent behind the message is condescending, patronizing and deliberately posted to make a definite point. There is a degree of separation in this method as the person sharing them is not the one who wrote the words originally.

Usually the point that the passive-aggressive person is trying to make is about a conflict of interest and they want the (Facebook) world and particularly the person it is aimed at to accept that they are right and the other person is wrong, without actually voicing anything concrete.

Therefore, if the passive-aggressive one is confronted and questioned they may downplay the situation by reverting to denial and manipulation. They might even send smiley emoticons to make it seem as though they are perfectly at peace and then turn everything around to make the person questioning them appear over-sensitive, paranoid and as though they are overanalyzing or imagining things.

Many people think that vaguely communicating through quotes, posts to their own wall or comments or likes on other people’s pages is a subtle and artful way to get a specific statement across. However, it is a destructive and damaging way of interacting and although the message may appear peaceful on the surface, the energy behind it is often far from it.

We may also be paranoid or misinterpret what someone is writing about, or wrongly pick up whom, if anyone, it is directed at. However, our intuition, when we tap into it devoid of emotion, is not usually wrong. Quite often the message that someone intends for us to read rings out loud and clear and we are aware that it has purposely been left for us to see so that we either learn from it or acknowledge the other person’s righteous point of view.

Passive-aggressive communication is commonly used when someone feels that openly explaining their point would appear or feel aggressive and it may make them look angry or resentful, so instead they choose, what they feel to be, a calmer option that makes them feel safe and hidden. Although, it isn’t calm or safe, it is an unproductive subversive attack and and can be extremely harmful to relationships as it creates insecurity, mistrust and negative vibrations.

When people are persistently passive-aggressive they are holding on to emotions and building up an array of unpleasant feelings, and they seep out of them in ways they think are controlled, acceptable and more desirable.

Passive-aggressiveness is the opposite of genuine, honest and assertive communication and is a coping strategy for when people desperately attempt to maintain the reins of their emotions as they may have been punished or rejected in the past for speaking out about how they feel.

Even though people may feel empowered and in charge when displaying their aggression passively, they are in reality so afraid of their emotions being perceived as wrong or ugly that they avoid direct interaction and render themselves powerless by striking up a one-sided outlet of communication that they can totally control.

In many cases, passive-aggressive behavior is a form of elitism. The person thinks they are above communicating their point and that the relationship does not warrant an open conversation, so they take what they think is the higher ground by letting their feelings be known in ways that outwardly appear as superior.

All too often the reason that people become passive-aggressive is that they live in fear of anger and they view it as a volatile and dysfunctional emotion.

When I was going through the first level of my Reiki Master course, the first question I was asked is: “How do you display anger.” I replied, “I don’t. “ It took me a long time to realize exactly why this question was so necessary and how much I had to learn from it.

I soon realized that I was refusing to accept that I felt and expressed anger and when someone wronged me or something upset me I either bottled up my feelings or they sneaked out when I was least expecting it. I internalized everything as I was so afraid of anger and I eventually realized that my insides were often churning up with all that unprocessed negative energy, or I ignored or avoided situations as I just didn’t know how or didn’t feel able to deal with them.

Up until then I had only seen anger expressed in volatile ways and I was unsure how to process it in a calm and rational manner. I had also been told many times that it was unacceptable to openly display emotions, so I tried to keep all of them locked inside and under control. Understanding how to process intense emotions is something that we aren’t taught in school and many people are conditioned to believe it is better to hold on to them out of fear of what may happen when they are released.

Emotions are energy and they need to find a way to pass freely through us, otherwise we will store them up inside where they will find other, more insidious ways of manifesting. It may take time to learn, through awareness, trial and error, how to process and release them, but until we do they have control of us—rather than the other way around. We may think we are in control, but these emotions lie dormant and whenever they are triggered they will erupt and be exposed in other ways, for example, passive-aggressive communication.

Although I am still learning, and I likely always will be, I now try to mindfully and assertively communicate what is bothering me, or what I feel upset or frustrated about. However, if I feel that conversing openly is not effective and not resolving anything I pull back until things have calmed and until I have had time to calmly think about what I am saying before trying again.

Anger has many different qualities and it is not damaging at all if we find ways to communicate assertively but without blame and without over-reacting or allowing our emotions to overwhelm us. It is also essential to listen very carefully to how the other person feels. Anger alerts us when something does not quite feel right and we can mindfully voice our concern respectfully so that the other person has the opportunity to understand how we are feeling, by being very rational but direct.

When we engage in open and non-judgmental communication and we remain compassionate we are then in a position to resolve any issues that may have been surfacing so that both, or all, people involved can be heard, acknowledged and given the chance to air their concerns.

It is not always easy to openly converse without emotions getting heated and without the wrong thing being said, or without misunderstandings arising. However, if we can try to talk with criticism or judgment, we will learn new ways to deal with our own and other people’s emotions and we will become less fearful of talking about how we feel and also less afraid of hearing how the other person feels too.

If we feel someone is being passive-aggressive towards us, we can attempt to speak to them by asking them if there are any problems and if it is possible to communicate further. If they quickly close the conversation down or they start to blame or shame rather than openly discussing their issue, then the discussion will likely just lead to further conflict.

We can take responsibility for any part we may have played and be honest with our self and the other person about our interactions. Even though we are responsible for our reactions and responses we are not responsible or to blame for anyone else’s.

Everyone has full accountability for how they behave and no one makes someone else feel or behave in a certain way. It is important we do not take ownership for how other people feel.

Communication about a conflict of interest does not have to be aggressive—far from it. When we interact clearly, concisely and courteously, without aggression and we openly explain how we feel, we can then build very strong foundations for a mutually respectful, open and honest relationship that both sides can learn and benefit greatly from.

Image: Courtesy of the Author