The Female Body on the Debate Stage: Why I’m “Pro-Choice.” 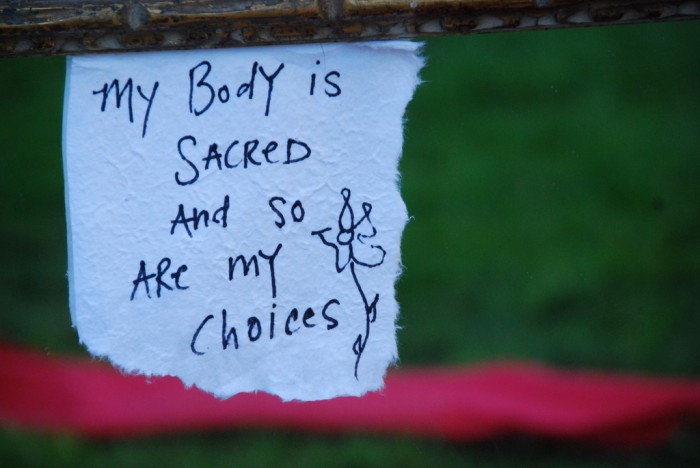 To provide some background, I’ve always had an interest in politics.

That said, I’ve come to hate it after studying it in college simply because the processes in this country are so beyond disgusting (and unabashedly accepted/condoned as such) that I couldn’t submit myself to such trash. It made my insides ache.

The thing that disturbs me the most is something we all know and love in the heat of any election campaign—”social issues.” Why do social issues irk me, you ask? Because according to what document does the government have the right to claim that things like women’s bodies and marriage equality are “issues” which are up for debate and mere matters of opinion?

My opinion: Social issues are the biggest waste of time on the political scene. However, we unfortunately have to fight the good fight at this point because if we don’t, we (women, for example) will be without rights. Period. How sad is that?

Horribly sad, but true nonetheless. And so I willingly submit myself to vocalizing my opinions for the sake of my rights.

Let’s delve into why these matters became “issues” in the first place, shall we?

But that’s exactly what it is. It’s no secret that religion is at the root of every social issue on today’s hottest political platforms. Why? Because religion is designed to a) divide “us” from “them,” claiming “we have it better, so come join us,” b) instill absurd amounts of fear in its followers, and c) gain and maintain power out of said fear and subsequent guilt and shame.

I know, I know: “But this is the United States! We don’t have a religion!”

Okay, so that’s not entirely wrong. On paper, we are free to practice whatever religion we please (which includes none at all). But if that were true in practice, then would we have to fight so hard for, oh I don’t know, a woman’s right to her own bodily health, when it seems that the most forceful opposition to such a blatant necessity comes from religious conservatives who feel it’s not “god’s will” to allow things like birth control and abortion?

No. No we would not. But alas, here we are, fighting for something we never should have even doubted we’d get, screaming our heads off to religious bigots who are unwilling to listen to anyone but those with whom they agree.

But I’m just wondering—do all those belligerently argumentative “pro-lifers” (which is a contradictory pseudonym of sorts in most cases, though that’s for another conversation) realize that being pro-choice means they would still have the personal right to—gasp!—choose?! That is, they can choose not to get an abortion or practice birth control. That’s their choice! Not the government’s choice. Not the church’s choice. Their. Choice.

What’s not their choice is what I decide for myself. I don’t care what the reasoning is—especially if it’s rooted in religion (which it always seems to be, and in which case I will reserve my snarky comments pertaining to the invalidity of this severely detrimental manmade institution).

It boils down to this: Your body is your choice, my body is mine.

That’s what being pro-choice means. You choose for you, I choose for me. We do not choose for each other. Not even the government should choose for us; it simply allows for our personal freedom to choose (which it shouldn’t even have to, but alas, here we are). Simple as that.

So, did I just blow those adamant religious pro-lifers’ minds? Probably not, because they’re probably not reading this. (Remember, most only listen to those with whom they agree, another fatal trait of religion. Again, I digress.)

But get this: What individual women do with their bodies isn’t actually a matter of popular opinion. It’s not something over which we should agree or disagree; a woman’s body is uncontainable by the objective standards through which the political arena so easily places it on a debate stage.

My choices are not up for debate. Neither should be my right to make those choices.

I hate social issues. And if this country adhered to the absence of religion in legal decision making, then those “issues” never would have weaseled their way into the political game in the first place. But we are human, and so we are weak in our psychological tendencies more often than we are independent of them, and so we cling to things with which we can identify—labels that make us feel contained and safe, even if they’re not necessarily good for us (like religion, but again, not going there).

These “issues” are undeniably a part of every election, debate and court decision, and the campaigns for the presidential nominations at this very moment are no exception. So until these issues disappear, I feel it’s imperative to be on the right side of this alarmingly influential piece of history.

That’s why I’m pro-choice: Because my body and what I choose to do with it for my health and wellbeing is not an “issue.” It’s not up for debate. It’s not a decision to be made for me.

It’s my body, my choice.

If you are a steadfast pro-lifer who calmed down enough to read this, first of all, congratulations for being open to at least hearing me out. (If you proceed to write nasty comments or mean messages and claim that the government shouldn’t fund abortions, then 1. do your homework and look at the facts, and 2. I take back my congratulatory remarks.)

Second, please consider that my being pro-choice doesn’t mean I’m asking the government to force you into getting an abortion. Again, your body is your choice; my body is mine. That’s all there is to it.

I’m pro-choice because although I wish my body didn’t have to be up for debate in the first place, it is. And so I must protect my rights—even though I don’t understand why they’re questioned, even though religious reasoning never should have had a place in the United States’ government, and even though the most aggressive opponents of my rights refuse to listen to such simple, understandable logic as vocalized by strong and passionate women of the past and present alike.

I’m pro-choice because it makes sense. Can you say the same about your stance?