The Secret of Self-Love: A Story of our Biggest Misunderstanding. 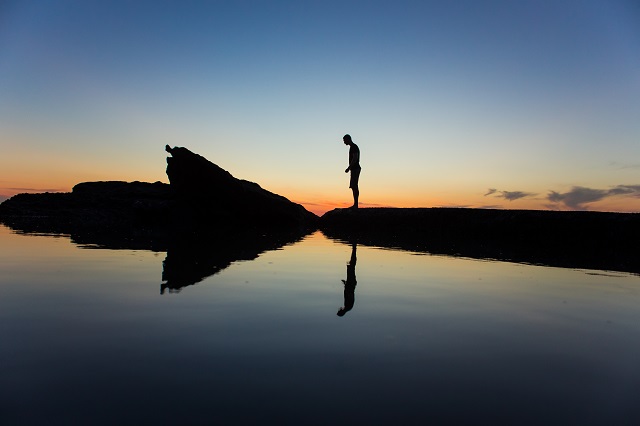 Since I was a boy, I have been fascinated by the many gods and goddesses in the extended family of world religions.

I have always regarded this vast pantheon of deities as metaphorical rather than literal—a medium to explain the infinite complexity and essential simplicity of existence.

Bearing that in mind, here’s a yoga-inspired fable I dreamed up about the fundamental fabric of existence: Divine love.

In the Himalayas, is the great snowcapped mountain, Kailash, that is called the navel of the universe, the seat of Shiva. For millennia pilgrims have flocked there, much like those clouds of migrating swans, that are said to be sacred.

In the foothills of Mount Kailash lived a renowned and reclusive yogi named Mahadeva and his young disciple, Sundara, whose name in the ancient tongue means beautiful.

Each morning, before sunrise, master and student would walk in silence to Lake Manasarovar, the mind-lake, so called for it was said to have been lovingly conceived in the meditative minds of Shiva and his wife Parvati before manifesting on Earth, such was its serene beauty.

It was also said that those who bathed and drank of its water would be cleansed of all karma, and upon parting this life would sit forever in peace on the peak of that great mountain with the Beloved.

So it was, and so it is still, that every summer the long line of pilgrims have climbed into the navel of the universe to swim in the purifying lake of Divine love. But summer was yet to come, and there were no praying pilgrims and no swimming swans—only the wise old yogi, Mahadeva, and his young student, Sundara.

They came to the pristine lake that day, like any other day, to meditate, to breathe freely, to surrender completely to the Divine. “A question, master,” said Sundara, looking across the vast mirrored water. Mahadeva nodded his permission.

“What is the ultimate purpose of sadhana? Why do we practice thus, day after day?”

Mahadeva replied in the ancient tongue, “Ishvara pranidhana. The first step is much the same as the last. Know the Self, love the Self, be the Self.”

Satisfied with his master’s answer, Sundara sat down by the shore of the lake to begin his morning practice. But before he closed his eyes to meditate he caught his reflection in the clear water, and Mahadeva’s words came back to him, “Know the Self, love the Self, be the Self.”

Transfixed, Sundara looked and looked upon his own beautiful face and fell deeply in love.

Thereafter he would wake, even before Mahadeva, and walk to the lake’s shore to look again upon his image, his shape and his form in the water. In time he became particularly attached to the external beauty of asana, making ever more complex and demanding physical shapes. The other seven limbs of yoga, that Mahadeva had patiently taught him, were gradually neglected.

When the summer came, so too came the snowy clouds of swans and the droves of pilgrims dressed in clean white cottons. Upon seeing Sundara at the edge of the lake practicing  yoga postures the pilgrims became intrigued.
Some would sit and watch him, others would join him and ask to be taught.

“Master,” they would enquire, “what is the purpose this practice?” Sundara would reply, “To love yourself.”

With each passing summer Sundara’s renown grew. Seekers came to be taught by the great guru. Many followed his teaching, making pilgrimage to the lake, not to bathe with the sacred swans, but rather to look upon their own images while they pursued ever more challenging physical shapes.

One summer the crowds of seekers climbed the great mountain, as they had for centuries, but they found no water where once there was the vast mind-lake, there was only a single swan sitting quietly on the sandy shore. Anxiously the seekers turned to Sundara,

Sundara was at a loss and could not answer.

It was then that the swan stood up and spread its wings, and its wings became the arms of a man, and its body became that of a man, and in the next moment Sundara’s long forgotten teacher stood before them—Mahadeva, whose name in the ancient tongue means Great God.

Mahadeva began to weep and to weep, and his tears began to fill the navel of the universe, and before long the lake was fully restored. It was then another swan flew down from the mountaintop and landed with a gentle splash in the water.

In that moment Sundara realised his great error and remembered his master’s teaching, but this time he understood its delicate subtlety.

He called out to his devotees then, “Forgive me my friends, I have taught you in innocent error a vain love of the self that is the ego—a love of the apparent individual beyond a love of the whole. After many years my master has appeared again to remind me of his great teaching of yoga that is selfless love.”

Sundara then walked into the lake, that was the tears of God, “Surrender to that which is greater than yourself, yet is of yourself. The wave that is the self surrenders to the wide wonder of water that is the Self. That is true love, my friends, the love of God that is called Ishvara pranidhana.“

The teacher smiled at his young student.

“That,” he said, “is the rare subtlety of Self realisation. Now truly, Sundara, you are beautiful.”

Then Mahadeva spread his arms wide, and his arms became wings and his body became that of a bird, and he was transformed once more into a swan. He beat his wide white wings and lifted up and over the vast clarity of the mind-lake, and the other swan, still making waves in the water, launched itself and joined him, and they flew together to the mountaintop.

Sundara and the watching crowd knew at once the other swan must be Parvati, Shiva’s devoted wife, who was from him, of him, and one with him.

They bowed in reverence and said in unison a single word in the ancient tongue,