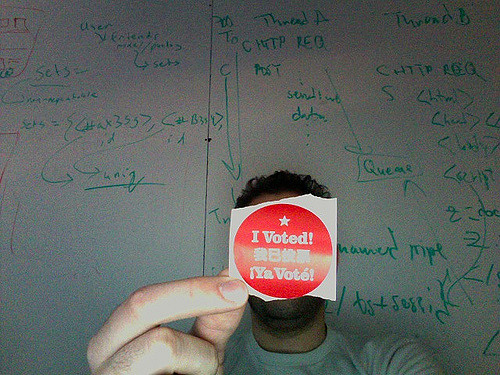 Voter Fraud, Voter Suppression, Voter Disenfranchisement—these ugly phrases are becoming well-known in our current political vernacular, as they have been occurring at primaries and caucuses across the United States.

It is specifically the Democratic primaries and caucuses which seem to be experiencing these problems. While some of these occurrences have been more subtle, the most blatant example (prior to today) occurred the day of the Arizona primary.

The number of polling locations was drastically reduced, resulting in massive lines with people waiting literally hours to cast their ballots. And some folks waited in these ridiculous lines, just to discover that “somehow” their party affiliation had been switched, and they were no longer registered as Democrats—therefore, they could not vote! This happened to some people who have been registered as and have voted as Democrats for years!

Latino communities, in particular, appear to have been targeted for voter suppression and disenfranchisement.

The voter fraud in Arizona has been met with various petitions and even lawsuits demanding that these occurrences be investigated, and people have hoped that such a blatant and grotesque display of fraud and suppression would not be witnessed again in the primary election, but alas—it continues to happen!

Today it is happening in New York, which is a particularly large state, with many delegates to be awarded to the candidate with the most votes.

If you’ve been following the Democratic primary election, then you’ll know that New York is a key state for Bernie Sanders and his supporters. Whether you’re  Sanders supporter or not, his momentum is undeniable. A year ago, most folks had never even heard of Bernie sanders and he trailed in the polls by 50 to 70 points—or more! He has since closed that gap to merely a few points in many states and overtaken Clinton in many recent contests, winning Hawaii, Wisconsin, Alaska, Wyoming, Utah, Idaho, Minnesota and Washington.

But the race is still super close, and Bernie must win more delegates from large states like New York (and the upcoming Pennsylvania and California) in order to win the nomination over Clinton, who won several delegates from “red states” in the deep south at the start of this primary election.

This is why the Sanders campaign and supporters are outraged about the ongoing gross display of voter suppression and voter fraud. Per CNN Politics:

“Bernie Sanders’ campaign on Tuesday called reports of voting irregularities in New York state “a disgrace” as New York City officials contended with the potential for mass confusion in Brooklyn, where the Board of Elections has confirmed that more than 125,000 Democratic voters had been stripped from the rolls…’From long lines and dramatic understaffing to longtime voters being forced to cast affidavit ballots and thousands of registered New Yorkers being dropped from the rolls, what’s happening today is a disgrace,’ Sanders spokesman Karthik Ganapathy said in an email to CNN, calling the difficulties a ‘shameful demonstration’.”

This is not the way a democracy is supposed to work. Each individual should have a fair and equal opportunity to cast their vote for whichever candidate they choose.

Voter Fraud, Voter Suppression, Voter Disenfranchisement—these are real things that are happening now. They are immoral and abhorable practices which must be stopped.

And this is not about whether one is a supporter of Bernie Sanders or Hilary Clinton—or any other candidate. This is about reclaiming our Democracy—reclaiming our liberty and our freedom to elect government officials, voted for by the people of this great nation.