What An Elephant’s Passing Showed Me About Love & Grief. {Video} 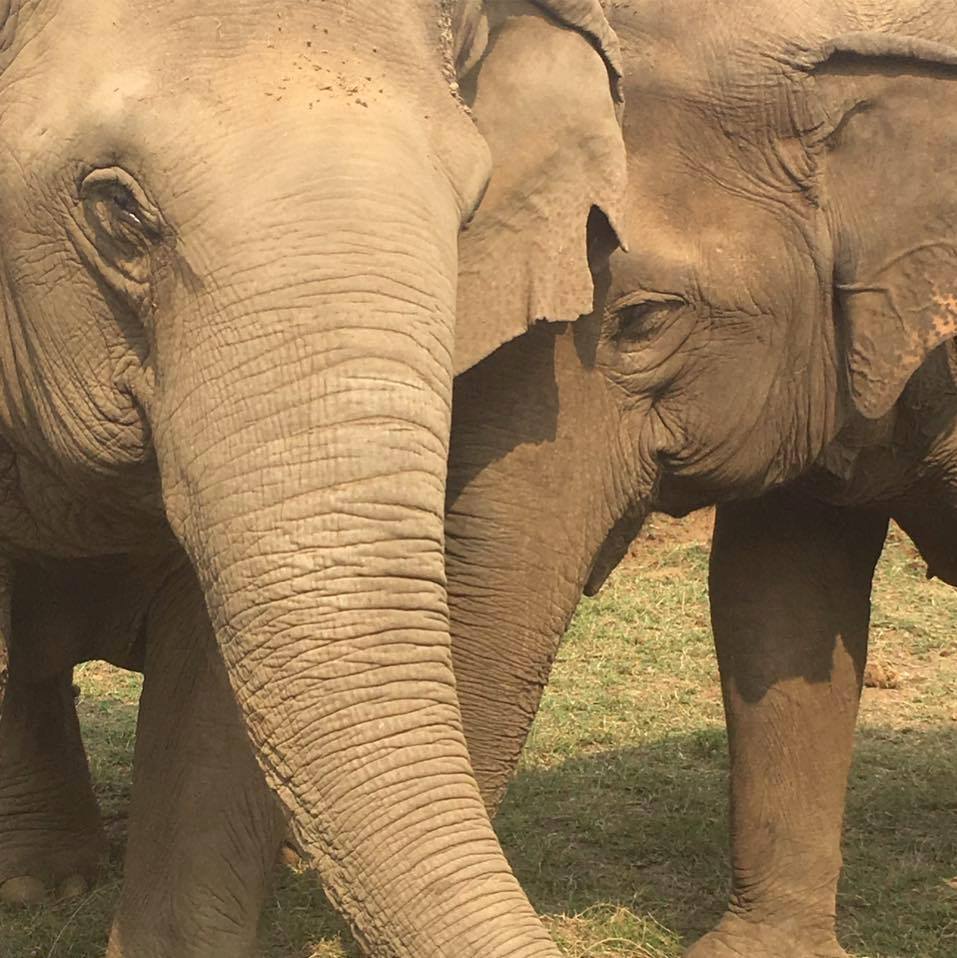 In early April at a sanctuary in northern Thailand, a blind elephant moved about unsettled and rumbled in distress as her best friend of many years was buried near their shared night shelter.

She stretched her trunk out to the side of the shelter, as if reaching for her friend. Sometime in the night or early morning hours, her closest companion had passed away in her presence.

“We gave to Jokia a long time to be with her great love. She stood over her for almost 6 hours, touching and nudging and leaning against the lifeless body of Mae Perm…Jokia did not eat much during the whole morning, and when she went to get some melons at the other end of her shelter, we took advantage of the moment to pull Mae Perm’s body out of the room and gently down into her final resting place. Jokia did come right over as we moved the body, and she touched Mae Perm, moaning painfully as her friend slipped away from her forever.”

Over here in California, my heart was heavy from this elephant’s passing. It’s not really the death itself—she died peacefully and of old age—it’s that I was heavy hearted for Jokia, left without her guide and greatest comfort.

Years ago when Jokia was rescued, Mae Perm went right over and touched her gently with her trunk all over, especially around the eyes, sensing her loss of sight. From that moment, Mae Perm chose to watch over Jokia. For years Jokia would feel for Mae Perm with her trunk and Mae Perm would make sound for her friend to know direction and follow.

Mae Perm was the first elephant rescued by Lek, back in 1992, before Elephant Nature Park existed. She had worked in the logging industry and was then kept as a pet and fed a poor diet that caused digestive issues. When her owners saw that she was losing weight and in poor health, they decided to sell her. After her rescue, Mae Perm quickly became healthy.

Jokia was rescued in 1997. When she had worked in logging, she gave birth and her baby rolled down a hill and died. With this devastating loss, Jokia refused to work, and her owner then forced her to work by beating her and shooting her with a slingshot, blinding her in one eye. As time passed, Jokia displayed more reluctance to work and obey commands and was then stabbed and blinded in the other eye.

I volunteered at Elephant Nature Park, and prior to my trip I had learned about Jokia’s tragic experience. Her story was one of the elephant stories that affected me the most and I really wanted to meet her. Standing in her presence on ENP land, I thought of the contrast between the extreme cruelty she had previously endured in logging, and her peaceful life at the sanctuary—respected and cared for—with Mae Perm loyally by her side. Instead of belonging to a particular social group, these two elephants stuck together as a pair. Perhaps Mae Perm sensed that Jokia was most comfortable with one companion and protector.

In my home, across the world from Thailand, I cried for Jokia’s loss of Mae Perm. I also cried because the intensity of bond as well as grief is not unique to human experience and many people don’t give this truth much credit. There are those who believe animals are not capable of in depth emotions, which is not the case.

The difference is that humans can express grief through the language of words, through expression that can be labeled and defined.

More specifically, humans analyze grief. In fact, analysis seems to be the greatest difference in the grieving process between humans and other species. To diminish nonhuman grief is to undermine both the power and capacity of love, and also fails to acknowledge that love transcends words. Grief is as real for animals as it is for people.

Elephants in particular are known for deep, extended grieving and significant mourning rituals that include repetitive vocalizations, gently touching the body with their trunk, covering it with leaves and dirt, and keeping watch over the site where the body lay. They have been known to return to the site for days or sometimes weeks.

The day after Mae Perm’s death, I had a little chat on Facebook with two volunteers I had met at ENP. There were tears around the globe yesterday, one commented. Indeed there were many posts from elephant lovers and activists and followers of Lek and Elephant Nature Park about Mae Perm and Jokia’s remarkable friendship. Many people were concerned for Jokia’s emotional well being.

To witness a mass of people affected by the death of a single elephant in northern Thailand was profound. It also gives me hope—that nonhuman beings are recognized by many people for their emotional complexities and the strength of their bonds with one another. It was an honor for me to witness the tender connection between Jokia and Mae Perm, and their story will live on as an inspiring example of an extraordinary friendship.

Video by Save Elephant Foundation