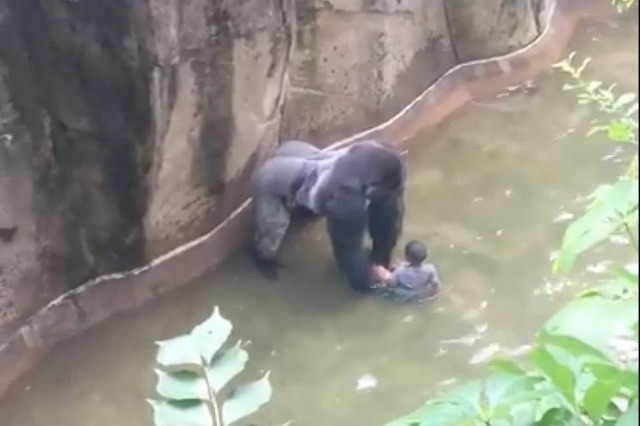 When I was growing up, I can remember my mother uttering these phrases all the time: “People who live in glass houses shouldn’t throw stones.” and “There but for the grace of God go I.”

I never hear these anymore. Instead, I am continuously astounded by the cacophony of blame in any given situation that spreads like a virus in the world of social media.

When the beautiful and Majestic Harambe, a western lowland silverback gorilla, was shot to death after a young child managed to fall in his enclosure, animal lovers were understandably upset and angry.

And the blaming began.

Now keep in mind, it is most likely that none of those finding fault and doing the blaming on social media, were anywhere near the site of the incident. So how would they actually know, given the conflicting reports on the incident, what the circumstances were?

Much of the blame seemed to be leveled at the parents.

There’s a meme with a picture of a gorilla that says, “Not sure why they killed me. I was doing a better job of watching that lady’s kid than she was.” I saw a tweet that claimed the father has “a lengthy criminal record” and asks, “are you surprised?” There’s even a petition with over 197,000 signatures that wants the zoo and Child Protective Services to charge the parents.

This petition was started by people who weren’t there.

Some of these virulent animal loving experts even attacked the wrong woman on Facebook.

“Ur scum u need ur kids taking off u sick b*tch u should’ve been shot dirty selfish b*tch,”
“U are a f*cking killer!!!!”

I’m frankly appalled that I have seen almost nothing in the media that shows any gratitude at all for the fact that a four-year-old child was not seriously harmed in this incident.

Anyone who has raised a small child knows that no matter how vigilant you are, children will do their best to thwart the most watchful eye. Children are incredibly inventive, adventurous and nimble. Enclosure be damned.

I remember being in a department store when my daughter was two or three years old. One second she was at my side and the next she was gone. I panicked when I couldn’t find her, and all of the sales people in the department were frantically calling her name. After what seemed like an eternity, but was probably only about five minutes, I heard a giggle. Following the sound, I found her hiding under a skirt on a skirt rack. She thought it was the best game ever.

Deidre Lykins, was an eyewitness and her husband tried to grab the boy. She wrote her account on Facebook:

“This was an accident! ! A terrible accident, but just that! My husband’s voice is the voice talking to the child in one of the videos. I was taking a pic of the female gorilla, when my eldest son yells, “What is he doing? ” I looked down, and to my surprise, there was a small child that had apparently, literally “flopped” over the railing, where there was then about three feet of ground that the child quickly crawled through!… the mother was calling for her son. Actually, just prior to him going over, but she couldn’t see him crawling through the bushes! She said “He was right here! I took a pic and his hand was in my back pocket and then gone!” As she could find him nowhere, she looks to my husband (already over the railing talking to the child) and asks, “Sir, is he wearing green shorts? ” My husband reluctantly had to tell her yes, when she then nearly had a breakdown!”

When I look at some of the video footage, it doesn’t appear to me that Harambe is in any way harming the boy. Indeed, to my admittedly untrained eye, it appears that he may have been trying to protect the child either from other gorillas or the loud shouting coming from the people above.

Some have criticized the decision not to use a tranquilizing dart to sedate Harambe. According to the experts, that could have taken up to 15 minutes. I’m just not sure that non-experts, which most of the critics are, have a right to determine how the zoo personnel should have responded.

I have read some opinions from animal experts that Harambe probably wouldn’t have hurt the boy. But I have not seen one expert question whether the zoo made the right decision, however, difficult it was—and I’m sure it was.

I mourn the loss of Harambe. The question of whether he or any animals should be kept captive in zoos is a one that I feel needs to be seriously considered. Animal sanctuaries for endangered or abused animals are of great benefit.

But in this day and age are zoos really necessary? My personal opinion is that zoos are not necessary. Ending animal captivity is one cause toward which animal lovers could expend their energy and outrage.

Animals in Distress: Some Helpful Guidelines.