Relationship-Friendly Spirituality: a Path for the Modern Times. 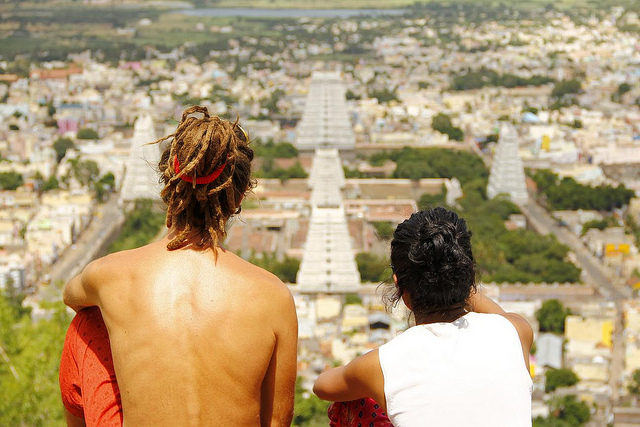 Have you noticed that all religions, spiritual practices, and traditions around the world have something to say about our intimacy?

Throughout human history, there have been two main answers to the pressing issue of sexuality and relationships and spirituality: the “ascetic” approach, and the “relationships-friendly” approach.

According to the ascetic approach, whoever embarks on a spiritual journey needs to leave sexuality and relationships behind. This is the view that most organized religions uphold. In these religions, even though the householder is allowed a limited amount of relationships and sexual life, the true spiritual practitioner (think a Catholic priest, or a Jewish orthodox Rabbi) is supposed to completely abstain from carnal love.

The ascetic schools have taught for centuries how to evolve spiritually by breaking contact with the material world. As part of this process, the spiritual aspirant naturally had to take distance from relationships. Whatever we may think of the ascetic approaches, there is undoubtedly some deep wisdom in them. Isn’t it true that relationships and sexuality can entangle us and somehow replace all other interests?

We all know the story: a young man or woman with lots of aspiration dedicates time and energy to yoga, prayer, meditation, or whatever spiritual practice you can imagine. But as time passes, our friend gets older, finds a partner, gets married, and has a couple of children. Priorities shift, and now safety, a certain degree of comfort, and stability become really important. Having a nice house, a car, bringing the kids to school, paying the bills—all of these activities become more relevant than any “spiritual practice.”

This is all normal and understandable, but from the standpoint of ascetic spirituality, the spiritual journey is over: it is now time for “real life” to kick in.

In a way, it is undeniable: life has a way of bringing us away from the big spiritual questions. Who am I? Where am I going? What is the meaning of life? Between paying the mortgage and cooking the next soup, bringing the kids to school and working, there may be no time left for those questions. Faced with reality, the ascetic traditions of the past took a radical approach: if you want to explore spirituality, then step away from life. Sever all bonds. Which means: stay away from sex, marriage, family. But also stay away from comfort, good food, and the sensory pleasures of life.

These days, monks in Teravada Buddhism observe the eight precepts that the Buddha lay down for his disciples. They include, of course, sexual abstinence, but also refraining from eating when one does not need it, not sleeping in luxurious or big beds, and not entertaining oneself with music or art.

Living according to these precepts, or the equivalent rules in other ascetic traditions, is a courageous decision. And when someone takes such a bold step, diverting all of his energy away from the practical things of the world and focusing it, single-pointedly, on spiritual practice, marvelous things can happen. Human history is full of examples of people who took the ascetic path in one of its forms, and climbed the heights of spirituality and self-realization, thanks to this brave choice.

Yet, even centuries ago, alternative approaches to spirituality existed that didn’t require cutting down any bonds, except the internal attachments.

Tantra exemplifies this attitude: a holistic form of spirituality that preaches the exact opposite of renouncing to life. If we want to discover spirit, Tantra says we can do so through matter, because they are two sides of the same coin. Food, sex, body, material possessions—all these, the exact same things that can trap us, become harmless if we relinquish all attachments to them. In fact, through material objects we can even reach spirit, because spirit and matter are fundamentally the same substance. There is no real difference.

This unity between spirit and matter is the fundamental reason why the Tantric practitioner, instead of turning his back to life, embraces life with total presence and commitment. This may look as an easy choice, but it is not. In reality, Tantra is a difficult, some would say even dangerous path.

The Tantric is constantly playing with fire, dealing with powerful energies with the intention of using them for spiritual evolution. Yet, those same energies can always trap him and keep him attached to transient, material things. In other words, the Tantric risks getting stuck in the “everyday life level,” fooling himself by believing that he is accomplishing something, while all he is doing is living an ordinary existence with some spiritual jargon attached to it.

The “tantric” and the “ascetic” approach have co-existed for centuries. Nevertheless, for historical reasons, the ascetic approaches have triumphed all around the world. All established religions, and most long-term traditions of spirituality, follow some kind of ascetic approach.

Now, however, there are several signals that we might be entering a time where “relationship-friendly” approaches to spirituality will become popular again. Why exactly is that?

There are several possible explanations for this resurgence of relationship-friendly spirituality. One of them is that we, modern people, are lazy and addicted to pleasure, and we simply do not have enough willpower to spend our lives meditating and renouncing the world. Though this explanation may have some truth in it, there is something more.

We live in an era of unprecedented hyper-connection among all human beings. As far as we know, there has never been another time in history where humans were so connected, so constantly in communication with one another. Isn’t there a reason for that?

I believe that we are approaching a stage where individual evolution is merging into collective evolution. Where the collective raising of consciousness is more important than the development of one single human being. If that is the case, we might have found a powerful reason why relationship-friendly spiritual paths are gaining so much relevance. Even the traditional ascetic religions, like Christianity, are gradually opening their views on sexuality and relationships.

In short, whatever our spiritual or religious choices may be, we aren’t forced to renounce intimacy. We can, if we so desire, include our sexuality, emotions and relationships into an organic, holistic and relationship-friendly approach to spirituality.

The time is ripe for that.