We are All Climate Deniers Now. 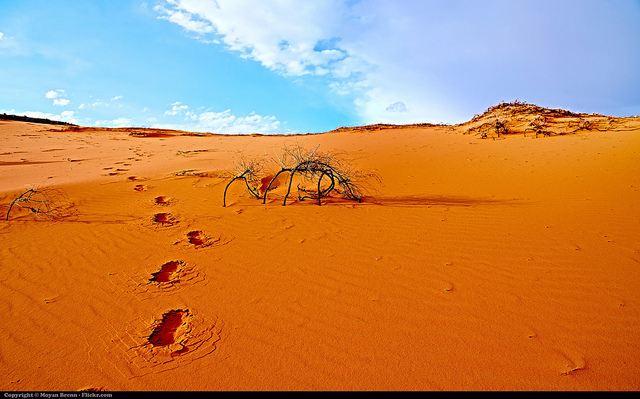 Somewhere in the Arctic Ocean there is a polar bear swimming in search of ice, slowly drowning as its limbs freeze up and fail.

And there is a young man, somewhere, crying as he reduces climate change to the struggles of this one dying light.

The paradox of climate change is that we cannot feel its effects unless we reduce it to such personalized dramas, and yet doing so trivializes the vastness of its effects.

There is a sense in which we all deny climate change because it is too much to hold in our hearts and minds. According to the Intergovernmental Panel on Climate Change 2014 Report, the concentration of greenhouse gases in the atmosphere has increased to levels not seen in the last 800,000 years—take a moment to really consider 800,000 years. And, we are all familiar with the expected results: melted sea-ice, higher sea-levels, decreased crop-yields, species extinctions, and sometimes social-collapse.

Humanity did not evolve to think about such phenomenon. When confronted by them in the past, they were approached through science or religion. But climate change forces us to think about them politically and economically as well. The problem is the science is measured in vague abstractions, making it hard to think in practical terms. Hence, we lapse into denial, treating a human-action problem more like some act of God.

While we all may be climate deniers of a sort, each of us denies it in our own special way.

Saying these groups deny climate change does not mean they deny it is happening, or even that it is serious. Progressives often speak of it in apocalyptic terms, but then turn it into an abstraction or caricature. Climate change is somewhere else, a probability to put off to tomorrow—or else a portent of the end of times. But even if you believe climate change will spur the apocalypse, you may be a climate denier, for the end of all life on earth is the ultimate abstraction and an excellent excuse for inaction.

Andrew Revkin, founder of the New York Times Dot Earth Blog, points out in my book of interviews, The Inner Climate: Global Warming from the Inside Out, that conservatives tend to be skeptical of the collective changes required to solve climate change. Whenever environmentalists start getting excited about solutions, their alarm bells go off, because the solutions tend to involve a wish-list of progressive programs. But conservatives also tend to be more concrete thinkers, moved to action by the things they see and feel. Yet, few can see a hurricane forming, and even when climate change makes them more probable, we cannot say it caused any single hurricane.

Michael Shellenberger, co-founder of the Break Through Institute, points out in his interview in my book that since greenhouse-gas emissions tend to rise as economies grow, climate activists often find themselves opposing development. Economic growth is then treated as an enemy. But this loses support among the poor in both the developed and the developing world. Hence, progressive politicians do not tend to raise the issue. Worse still, climate activists tend to defend the needs of the yet-unborn against the aspirations of the living.

Since future generations do not vote in the elections of today, climate ethics has not fit well into progressive political platforms.

Thus the turn among climate activists to personal ethics and local solutions. But buying local produce and recycling does little to reduce greenhouse-gas emissions. It is not that they are useless. The ethicist, John Broome, notes that we do have a duty to eliminate personal greenhouse-gas emissions, but we have to recognize the need for systemic changes that can only be enacted politically.

Climate change upends settled ways of thinking, just as it unsettles the atmosphere and oceans. With everything in flux, it is easy to lose our heads. But climate change calls on us to remain grounded, even as everything settled is thrown up in the air. Climate science requires rational thinking, climate politics effective action. But if we cannot keep our heads, we will overreact and thus act irrationally.

When a person overreacts we do not usually say they are in denial—just the opposite. But thinking about climate change requires that we take in so much that any mental imbalance is likely to fixate the mind. Yet, fixing attention on any single effect of global warming will tend to result in ignoring the vast range of impacts likely to result from climate change. Hence the irony that the most ardent climate activists often ignore the full range of its most likely impacts, zeroing in on rising sea-levels or the possible extinction of polar bears when truly stranger things are afoot.

Confronting climate change requires more than mental muscle and a strong will. It also requires a temperate inner climate, and this requires that we tend to more than the climate science and politics.

Facing up to climate change requires that we keep everything in mind and do so with grace.

Climate change calls on us to broaden our minds and open our hearts. Until that happens, we may all deny its vast and imponderable scope.