While You Weren’t Looking, Your Civil Rights Just Took a Hit. 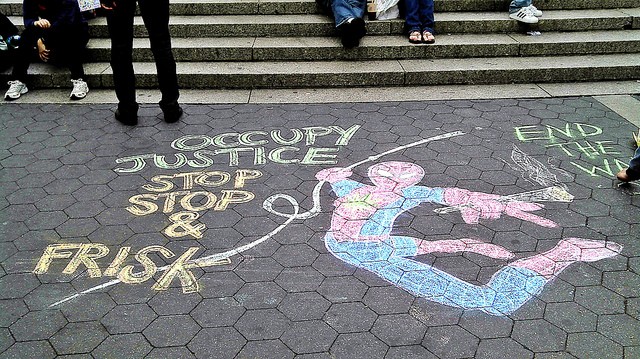 While most of the country was busy debating the Second Amendment and whether or not “well-regulated militia” should include terror suspects with assault rifles, the U.S. Supreme Court plunged a dagger in another Constitutional right—the Fourth Amendment protection against illegal search and seizure, which has the potential to affect millions of Americans.

The Fourth Amendment has historically safeguarded the public against being illegally detained by police officers. The Fourth Amendment has also protected against unlawful searches, or searches without a warrant or legal reasonable suspicion, in purses, luggage, vehicles, houses and other places where people expect a legitimate level of privacy.

In the past, people have a right not to be stopped and searched unless an officer has a search warrant, an arrest warrant, or reasonably believes a crime was, is being, or is about to be committed. This has been upheld in courts throughout the country, and through what is called an “exclusionary rule,” evidence gathered in an illegal stop and search was deemed inadmissible in court.

This week, that changed.

On June 20, 2016, in Utah v. Strieff, the U.S. Supreme Court ruled that, if a person is stopped illegally and is found to have an arrest warrant while being detained, it no longer matters if a person is unlawfully detained.

Any evidence collected during an unlawful stop can be seized and used against them in court.

What this means is that, if an officer pulls you over or stops you while you’re walking, even if you aren’t doing anything wrong, if you are found to have a warrant, it doesn’t matter why you were stopped. You can still be arrested and your property—including your money, your vehicle, or other personal items—can be taken as evidence to use against you in court.

If you’re not doing anything wrong, you shouldn’t have to worry, right? Wrong.

First, let’s clarify implications this discussion may have about the law enforcement community.

There are fantastic police officers in our country. Thousands of men and women wake up every day, put on a uniform, and perform the often thankless job of protecting us. They are good people; they are mothers and fathers, sisters and brothers, and they earn and deserve respect.

The hard truth, though, is that just like the rest of the population, not everyone in law enforcement is good.

Wanting justice and reform for bad cops and bad police policy and supporting good officers and their departments are not mutually exclusive ideas.

There are problems on our streets that the Fourth Amendment was intentionally drafted to protect us against.

In Newark, New Jersey, a stop-and-frisk policy has been in effect for several years, in which anyone deemed “suspicious” could be stopped, questioned and property seized as “evidence” without adequate probable cause.

In 2011, after countless citizen complaints, the U.S. Justice Department forced the Newark Police Department to compile and release data on such searches and seizures. NPD turned over six months of data in early 2014, and in that data, a pattern became evident.

Although black people only made up about half of the population in Newark, they made up 75 percent of all stop-and-frisk stops. Racial profiling became clearly evident, and the Justice Department intervened saying that Newark police:

“… engaged in a pattern or practice of unconstitutional stops, searches, arrests, use of excessive force and theft by officers in violation of the First, Fourth and 14th Amendments. … [and] NPD’s law enforcement practices had a disparate impact on minorities in Newark. … this pattern of constitutional violations has eroded public confidence in the police.  As a result, public safety suffers and the job of delivering police services was more difficult and more dangerous.”

Newark isn’t the only example of places where people of color have been stopped without adequate cause. In New York City, Philadelphia, Los Angeles, and Chicago, reforms are now being enacted because of clear racial profiling. In each city, the rights of black or Latino-looking people were found to be violated because they were being stopped routinely, simply for walking down the street, driving their cars, or being in an economically blighted or crime-ridden area.

If you think that’s not a problem, imagine for a moment that you or your child, or someone else you love, was stopped and treated like a criminal just because of the color of their skin. Imagine the humiliation and imagine the distrust such occurrences would breed among your community of the very people who are supposed to be protecting you and your family.

It hasn’t been only people of color who have been disproportionately targeted. Homeless people have also been harassed by police in some cities.

Dissenting Justice Sonia Sotomayor, the Supreme Court’s only Hispanic judge, wrote, “It says that your body is subject to invasion while courts excuse the violation of your rights. It implies that you are not a citizen of a democracy but the subject of a carceral state, just waiting to be cataloged.”

Not a problem if you don’t do anything wrong to get a warrant, right?

The problem here is that due to tough-on-crime laws fueled largely by propaganda and campaign contributions by the private prison industry have made poverty a crime in many ways.

Got a traffic or parking ticket and can’t afford to pay it? Warrant for you.

Homeless, got a ticket for sitting in a park and can’t pay it? Warrant for you.

Have no car and count on a ride to court who shows up 10 minutes late? Warrant for you.

In Ferguson, Missouri, where a Justice Department investigation prompted by the police shooting of unarmed teenager Michael Brown found that law enforcement in the city routinely violated the civil rights of black residents.

A startling 16,000 of Ferguson’s 21,000 citizens have outstanding warrants—an average of three warrants per household, mostly for minor traffic infractions. The reason: the city was relying on revenue from tickets and arrests to supplement its budget.

This ruling has the potential to detrimentally impact lives, but perhaps more importantly, it undermines the very purpose of the Fourth Amendment, which is to stop any policing force from being able to target individuals or groups for harassment.

Even if you don’t think this affects you, the fact that it erodes the U.S. Constitution should be of concern for all of us.

As Sotomayor wrote, “We must not pretend that the countless people who are routinely targeted by police are ‘isolated.’ They are the canaries in the coal mine whose deaths, civil and literal, warn us that no one can breathe in this atmosphere. They are the ones who recognize that unlawful police stops corrode all our civil liberties and threaten all our lives. Until their voices matter too, our justice system will continue to be anything but.”