Forget this Election, We Need Democracy in America. 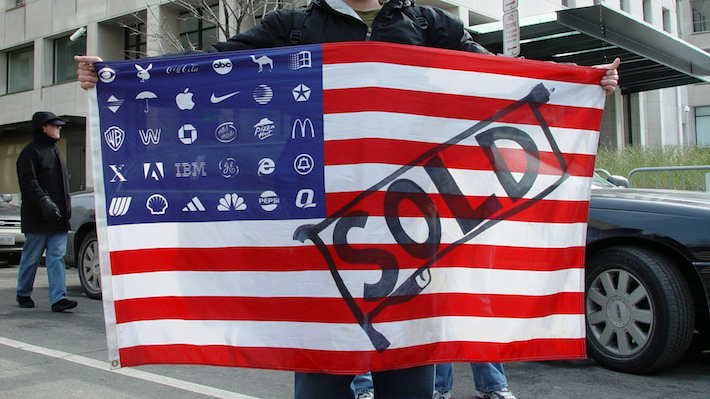 Private capital tends to become concentrated in few hands, partly because of competition among the capitalists, and partly because technological development and the increasing division of labor encourage the formation of larger units of production at the expense of smaller ones. The result of these developments is an oligarchy of private capital the enormous power of which cannot be effectively checked even by a democratically organized political society. This is true since the members of legislative bodies are selected by political parties, largely financed or otherwise influenced by private capitalists who, for all practical purposes, separate the electorate from the legislature. The consequence is that the representatives of the people do not in fact sufficiently protect the interests of the underprivileged sections of the population. Moreover, under existing conditions, private capitalists inevitably control, directly or indirectly, the main sources of information (press, radio, education). It is thus extremely difficult, and indeed in most cases quite impossible, for the individual citizen to come to objective conclusions and to make intelligent use of his political rights.

The American people have been moving to the left for years.

Poll after poll shows them becoming more progressive and more accepting of difference of all kinds (the rapid rise of gay marriage being just one example of this). The aging white minority that supports a Palin or a Trump represents not more than 20-30 percent of the population. It’s corporate media that has given this shrinking demographic disproportionate airtime while downplaying left-wing movements like Occupy and the Bernie phenomenon, using the same arsenal of spin techniques they used to prepare us for wars in Iraq, Syria and Iran. And the result is that, even as Americans have moved to the left, their political establishment has been moving relentlessly to the right. Thus the politics of overt corporatism, imperialism and austerity, which in the days of Reagan were associated with Republicans, have now become the politics of the Democratic Party.

This relentless pushing of our political discourse to the right also coincides with the rise of media consolidation, which has news is now owned by a small and immensely powerful corporate cartel that works actively to advance not only the interests of its media outlets, but of the corporate class as a whole. We have thus arrived at the absurd situation in which otherwise intelligent and educated Americans actually believe that MSNBC promotes “liberal” values and forms a diametric opposite to FOX, when they ultimately advance the same pro-corporate agenda.

Does anyone really believe that Comcast and GE give a damn about progressive values?

They simply deploy emotionally-charged social issues (abortion, gay marriage, gun control, the death penalty…) to divide voters as the Democratic and Republican establishments work equally to reconfigure power toward transnational corporations like Comcast and GE. Of course we must fight racism and discrimination of all kinds, a woman’s right to choose and the rights of immigrants. But we cannot allow these issues to be cynically used to distract and divide us as we sink ever deeper into inequality and debt, the erosion of our civil rights and the murder of millions in the endless global war for profit—not to mention the impending collapse of the biosphere and the human species with it.

Contrary to common myth, Comcast and GE are not only interested in ratings. Ratings are only one way of expanding earnings and power, and no investment is more lucrative for them than policy. This is why they spend hundreds of millions of dollars lobbying lawmakers. And their lobbying is not progressive at all, but standard corporate neo-fascism. Who seriously thinks that they would report objectively on the very issues they lobby on?

GE is the world’s 18th largest arms manufacturer, and Phil Donahue and others were fired from MSNBC in 2003 over their opposition to the Iraq War, with others following. GE’s activities in the Energy Sector include offshore drilling, pipeline construction and fracking. Do you really trust them to report on Keystone XL or the anti-fracking movement? Comcast, which has been sued for fraud and unfair business practices including intentionally slowing and blocking Bittorrent uploads, spent $14.7 million dollars, together with its nominal competitors, AT&T and Verizon (which spent $15 and $17.5 million respectively), lobbying to fight the very Net Neutrality Act that Comcast has been accused of violating.

These are just a few examples, but the point is that GE, Comcast and all the other transnationals that own major news outlets are not simply economic actors: they are political actors. And MSNBC—like the other corporate networks—is not just a money-making enterprise: it is a delivery system for information that furthers the interests of its parent companies. MSNBC and FOX both represent the interests of their corporate owners, just as the two corporate Parties represent the interests of their corporate donors, billionaire patrons, and guardians of the Revolving Door. MSNBC could actually be said to be worse than FOX because it plays to a more intelligent audience and thus is required be more intelligent in its manipulation.

“Corporatism” is rule by trans-national corporations, which have no nationality, no allegiance to anything but their major shareholders, and no goal but expansion, profit and increased power. They thrive on maintaining an illusion of competition: Comcast vs. AT&T, MSNBC vs. FOX, the Democrats vs. Republicans, while pursuing deeper common interests against those of the population. Corporatism controls politics by miring it in collusion, influence-peddling and patronage, turning it into a market in which politicians and laws are sold to the highest bidder.

Corporatism controls the economy by reducing every sector to a cartel of a handful of vast multinationals. Finally, it controls the media—the information citizens base their decisions on, manufacturing consent for policies that benefit it. Corporatism is war for profit, surveillance for profit, prisons for profit, health care for profit… It is the overtaking of our military by companies whose CEOs go to the White House and start wars they profiteer from. It is the handing of the Democratic National Convention to a health insurance executive, lobbyist and major Republican donor, a pro-fracking lobbyist, and yes, an Executive Vice-President of Comcast.

This situation is not new. Many of our greatest thinkers saw it coming, as the Einstein quote above illustrates. Today however, we have reached a crisis point, where even the pretense of freedom and democracy we enjoy could be stripped from us with the next terror attack, the next climate disaster, the next market collapse. The signs have been there for years, but now the masks have dropped. We cannot afford another four years of inaction. We must oppose both Trump and Clinton, the RNC and the DNC, FOX and MSNBC—we must oppose the entire edifice of oppressions being constructed by the corporate class, now, in 2016, and stand up against the corporate takeover of our country.

So whoever you vote for in November, simply voting is not enough. We must take back our democracy. One way to do this is by uniting behind a call for a constitutional amendment to protect our electoral and governing process from the influence of money, which subverts the principle of one-person-one-vote.

This amendment should include (or be accompanied by), among other things: