5 Reasons Why we Need to start Seeing the Olympics for What they Really are. 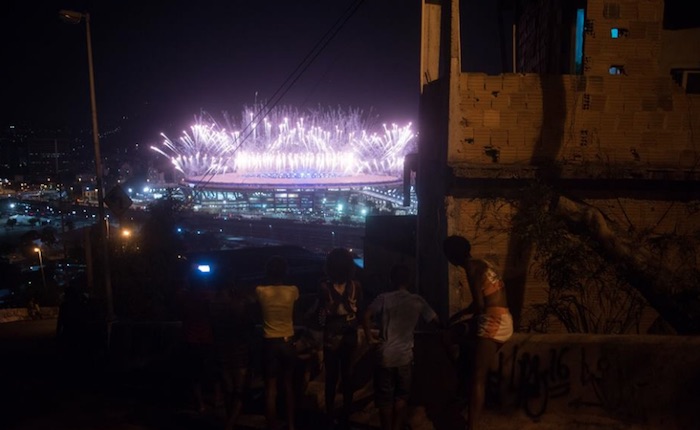 I can’t deny that there is a magnetic pull to the Olympic Games—most of us love to watch in awe of the athletic prowess, talk about competitors and gush national pride when “our” team wins.

But there’s also a dirty side lurking behind the polished appearance of massive advertising campaigns, corporate sponsorships, shiny medals, political agendas and grand award ceremonies. This side is less clean, less put together and less upright. A side we might not be proud of if we were to truly look at and see.

Maybe I am already cynical toward the Olympics because of my tangible dislike of TV, and how when these games are on they are played on every available one, sucking people into a temporary zombie state. But the well of feelings that stirs in me when I think about the Olympics is not one of pride—it actually borders on disgust. This is a reaction I have grown to trust, and it usually leads me to some hard truths.

I have no doubt in my mind that the Olympic Games are bad news to more people than good news.

After doing some deep thinking and research, here’s why I feel this is so.

1. The promotion of elitism.

Only the wealthy can afford to attend.

Opening ceremony tickets for the summer games in Rio were valued at approximately $1,400. While individual events are less, the cost of accommodation makes attending them prohibitive, as rental space tend to rise threefold in host cities.

Then there is the fact that to be an athlete in the Olympics you must have money—a lot of it. Most of these athletes don’t, so they rely on sponsorship from corporations. Then there is the elitist mentality that these games promote, that we need to compete to win, push ourselves to the limit to succeed and that the end goal of life is to be at the top—How in touch with reality or mindful is this?

2. Who the games actually support.

There is a temporary influx in tourist dollars with the Olympics, but what does this actually bring long-term to the communities who stand juxtaposed, locked out of an event in their own city, even neighbourhood? These are the very people who pay their tax dollars (which total billions) to help fund these games.

Cities tend to go into heavy debt after hosting the Olympics.The Sochi games cost over 50 billion dollars. Just bidding to get the Olympics can last up to a decade and cost millions.

Could governments be putting its citizens money into something more fruitful?

Those who benefit from these games are not the working class. The ones who do benefit are the big business and mega corporations who sponsor the Olympics—it becomes just another handy tax write off!

3. Relocation of the poor.

What happens to the poor during the Olympics and afterwards? They get dispersed. Their neighbourhoods become destroyed and they are told that they must leave. Where do they go? Usually the government doesn’t care, so long as they are somewhere other than where the sparkly Olympics need to be.

At Sochi, many of the outlying villages lived without running water or sewage systems, and relied on public communal outhouses. These outhouses were seen as an eyesore by the Olympic Committee and court ordered to be demolished. The judge said the villagers should just get eco toilets (when the reality was most could afford only a bucket). Major roads were built straight through these neighbourhoods too.

In a place like Brazil, where slums make up the housing for a large number of the working population, people were simply evicted and the slum land was sold to make new accommodations for Olympic goers.

During the Vancouver Olympics, the massive population of homeless and addicts there were not benefactors of the Games either. In fact, in one of the poorest neighbourhoods, the Downtown Eastside, the residents lived in visceral fear.

One homeless addict said about the Vancouver Olympics: “We’re all going to be cleared out of here before the Olympics…The clean-up will happen—they all want to hide the city’s black eye…”

In this way it seems the Olympic games becomes an excuse for a city to eliminate its most marginalized residents.

4. It creates a political smokescreen.

When the Olympics are being held, are we listening to anything else in our world other then who is winning gold? How much can politicos get away with when our attention is so diverted? I agree that we sometimes need a break from weighted topics, but couldn’t we take a walk or see a comedy show instead? Do we need to have such an expensive distraction?

What if we were to choose one with a more positive impact on the world?

The 2008 games took place in a country with a political climate that is actively oppressing and occupying another—I’m talking about the Chinese occupation of Tibet.

Barak Obama made this statement just before the games:

“The Chinese government must take immediate steps to respect the dignity, security, human rights and religious freedom of the Tibetan people, to provide foreign press and diplomats with access to the region, and to finally work with the Dalai Lama toward meaningful autonomy for Tibet. If they do not, there should be consequences.”

And was China ever punished by the world? No, we just got nicely distracted by shiny medals and bright, waving flags—none of these including Tibet’s.

Every plastic drink glass, every food container, every wristband, firework and stadium that won’t be used after those few weeks is a waste—all in the name of congratulating people for being Type A achievers, pushing them to push their own bodies to extremes and spend giant amounts of blood money in the process.

I personally don’t think we need to be diverted and manipulated into feeling national pride because “we” won another gold.

We can be more mature then that.

I think we need to become conscious people, humans who honour beneficial interaction with our world, the environment and each other, interactions that take down our conditioning rather then build it up and ones that don’t cost 51 billion dollars for a few weeks of play.

Sorry, but I believe we need to take a second, third and fourth look at this world bonspiel of bravado called the Olympics.

What else could we use all that money and energy for? Possibly something that wasn’t a massive tax write off for the already rich—perhaps, on something that could make us truly proud.