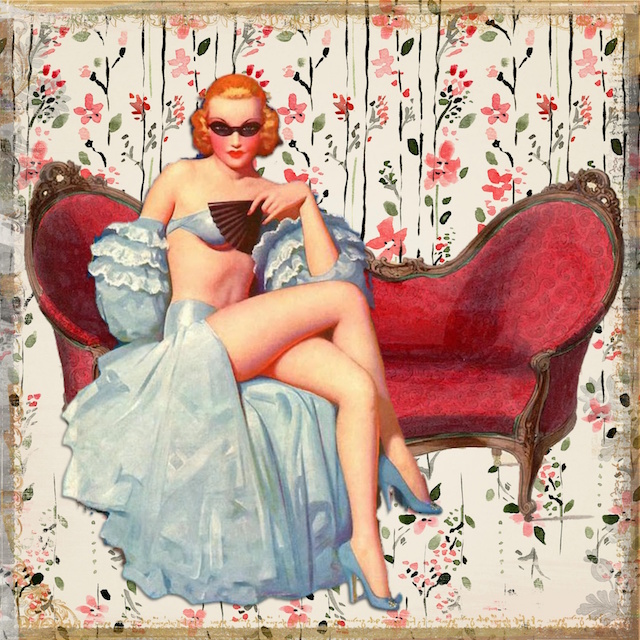 The Myth of the Coy Female.

“She’s easy.” Have you ever used or heard this expression, and felt the negative charge behind it?

Women are constantly judged, blamed or outright punished if they happen to be going through a phase of sexual openness or experimentation. It’s time to look at this negative bias honestly and decide whether it is really productive.

A few days ago, I was sitting with my dear friend Dora on the balcony of my Barcelona flat. It was a sunny afternoon, and we were catching up with each other’s lives after almost a year apart.

Dora was telling me about an e-mail she was writing to her new lover, in which she wanted to express her lust for him. She had been ready to tell him, in full honesty, how she was looking forward to making love to him again. But all of a sudden she felt a blockage and found herself unable to send that message.

She feared that her lover might have considered her “too easy.”

As Dora finished relating all of this, there was a pause in our conversation as she seemed intent on working through some emotions and thoughts. Then she took a breath, looked me straight in the eyes and asked,

“Honestly Raffa. As a man, are you turned off by “easy women?” I mean…women who are just too plainly available for sex?”

And, of course, being a sexually expressive woman in a sex-negative world, she is facing some challenges.

But Dora’s question did make me think. I may not be representative of the average man; I had to ask myself: Are men turned off by sexually open, expressive and available women? Do men secretly want women to play “hard to get” so that they (the men) can show their hunting skills? Hmmm. Dora was definitely on to something. She had just revealed one of the most accepted assumptions in our culture: the myth of the coy female.

The assumption that women aren’t particularly sexual creatures goes along with a secret injunction: women shouldn’t be too sexually expressive.

This limitation on female sexuality often makes women worry about freely expressing their sexual desires, especially outside the context of a committed relationship. For example, my friend Dora was genuinely afraid that if she openly told one of her lovers how much she wanted to make love to him, he might be turned off. So, Dora felt obliged to play a push and pull game. She didn’t really feel like playing it, but the risk of being perceived as an “easy woman” (substitute any other derogative word used to describe women who are “too sexually available”) was too big.

Many women are seriously concerned that a man will lose interest in them if they are too “easy.” Yet “easy,” in this context, simply means owning their sexual desire and communicating it openly, without shame or guilt.

What could possibly be off-putting this “easiness?”

Sadly, everyone is, more or less consciously, connected to the collective trauma of women suffering violence when they dare to express their uninhibited sexual desire. This traumatic memory affects us all, men and women alike. Today, in many parts of the world explicit violence toward women has given way to much subtler forms of punishment, like social stigma. Most women learn during adolescence (or earlier) that they may face harsh disapproval or even become outcasts if they express their sexual desires without consideration for the rules of patriarchal society and morality.

This is one of the big tragedies of our times: female sexual desire has been repressed and punished for so long that we don’t even notice it anymore. The dynamics of fear, anger and repression are so embedded in our habits, our language, that they become second nature. So much so, that it isn’t uncommon for an otherwise open-minded and accepting person to express severe negative judgments toward a woman who is going through a phase of unapologetic sexual openness.

Which makes my friend Dora’s question—do some men get turned off by women who are too “easy”—quite relevant.

Yes, some men do. It is likely that, as a woman, you will come across men who are triggered, challenged and turned off by uninhibited expressions of female sexual desire.

As a woman, you may find men who love you when you play the innocent maiden, but are scared or distant when you’re the temptress. That men may react in this way just says something about them, and about the social conditioning they have received. These men may need to work on their assumptions and projections regarding feminine energy before they can receive a free, uninhibited expression of sexual desire without going into judgment, withdrawal or fear.

So, as men and women trying to be more loving and conscious every day, let us ask ourselves a question:

“Easy” is a positive, affirmative word in almost every context—except when applied to women. We all love an easy life, easy-going friends, “taking it easy.” It is perhaps time we recognized that easiness in sexuality is also a gift—or at least a respectable choice.

No woman or man should feel ashamed of being open, available, easy and keen to engage in sexual intimacy, just as no one should feel judged if they decide to withdraw sexually. Reclaiming our right to live our sexuality in the forms that best suit us, free from judgment and expectations, is one of the fundamental steps to becoming a fully integrated human being, and creating a more loving world.